On Sunday night (Sept 22), Thomas Cook suddenly collapsed, leaving 600,000 tourists stranded abroad and putting 21,000 jobs at risk. The 178-year-old British tour operator has issued a statement on Monday (Sept 23), saying that its board “concluded that it had no choice but to take steps to enter into compulsory liquidation with immediate effect” after talks on a financial rescue failed.

Effectively, all future holidays and flights booked with Thomas Cook are cancelled as of 23 September 2019. For travellers currently abroad on holiday packages protected by the Air Travel Organiser’s Licence (ATOL) – a UK financial protection scheme that safeguards most package holidays – the Civil Aviation Authority (CAA) will arrange return flights to the UK and sort out hotel bills.

If you are not ATOL protected, however, you are not entitled to make a claim for out of pocket expenses and additional nights of hotel accommodation under the ATOL program, although you may be able to claim from your travel insurer, bank or your credit card issuer. Still, repatriation flights are only available for passengers whose journey originated in the UK. 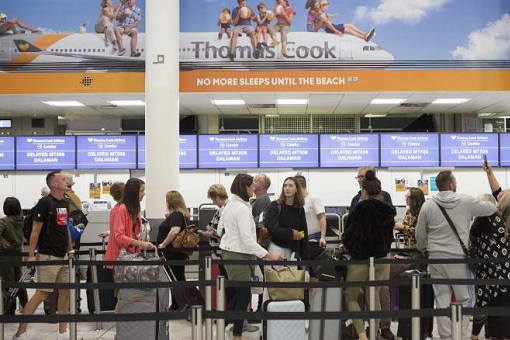 To add salt into injury, these repatriation flights will only be operating for the next two weeks (until 6 October 2019), after which tourists will have to make their own travel arrangements. Peter Fankhauser, Thomas Cook’s chief executive, said the company’s collapse was a “matter of profound regret”, and has offered an apology to the company’s “millions of customers, and thousands of employees.”

The demise of Thomas Cook marks the end of one of Britain’s oldest companies that started the history of mass travel and the first package holidays in 1841, when Thomas Cook escorted around 500 people, who paid one shilling each for the return train journey, on his first excursion. The mass tourism established by Cook once helped Italian economy from collapse.

Apparently, Thomas Cook had been scrambling over the weekend to avoid collapse after the Royal Bank of Scotland and a range of other banks demanded that Thomas Cook Group PLC scouts £200 million (US$250 million; RM1 billion) in funding by this upcoming week. At least 150,000 of 600,000 customers on vacation are from Britain, and they had no idea what was about to hit them. 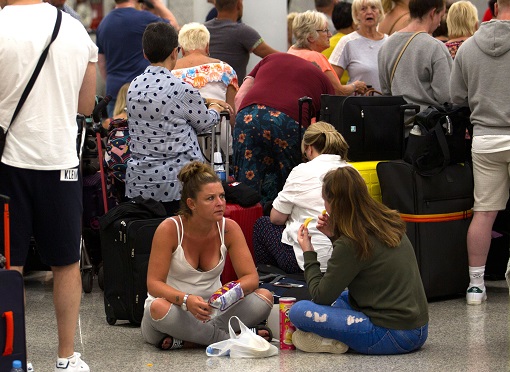 Grant Shapps, the UK’s secretary of state for transport, said – “Our contingency planning has helped acquire planes from across the world – some from as far away as Malaysia – and we have put hundreds of people in call centres and at airports. But the task is enormous, the biggest peacetime repatriation in UK history.”

In fact, “Operation Matterhorn” – an operation to ensure no one will be stranded – is so massive that it would cost the UK government an estimated US$750 million. Some have argued that it’s cheaper to rescue the world’s oldest tour operator (US$250 million) than to burn two-third quarter of a billion dollars to repatriate its customers stranded from around the world.

Thomas Cook executives have blamed Brexit, which has led many UK customers to delay their holiday plans for this summer. The weather was also being blamed. A heat wave across Europe last summer that forced Britons stay home was just one of many factors hitting its bottom line. But back in 2010, Thomas Cook had a bad year because volcanic ash clouds from Iceland disrupted flights across Europe. 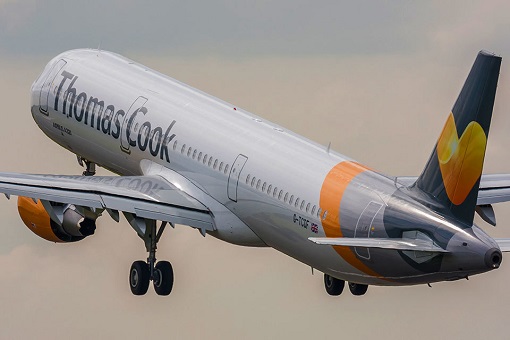 Despite serving 19 million customers a year in 16 different countries, the tour operator faced fierce challenges from budget airlines and the rise of Airbnb. Still, Thomas Cook managed to sell 11-million package holidays last year. It also had a partnership deal with Expedia to try to attract the online crowd. Like it or not, the real problem was bad management.

At the end of 2007, soon after the merger with MyTravel, Thomas Cook thought it was so flush with cash that it could spend £290 million on buying back its own shares. It was a bad decision. The merger would reduce Europe’s four leading tour operators to two within a month. Rival operator Tui joined with First Choice Holidays to create Europe’s largest tour operator.

Within 4 years, the stock price of Thomas Cook plunged like a rock from above 250 pence to a low of 9 pence – a staggering 95% loss. Chief executive Manny Fontenla-Novoa stepped down in 2011. By November 2011, thanks to arrogance and mismanagement, the company had to secure a £200 million loan facility to stave off a cash crisis that had threatened its survival. 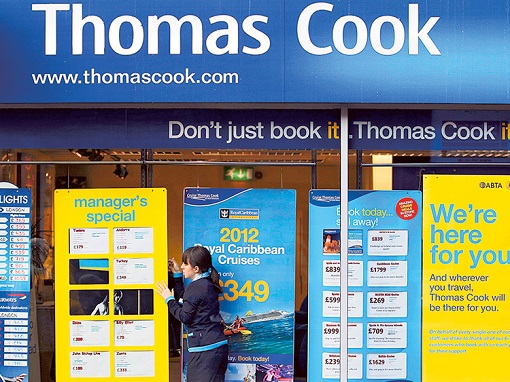 New chief executive Harriet Green managed to turn around the company through cost cuts, asset sales, a new online strategy and reinvigorated travel products. The share price popped from 14 pence to 190 pence. In 2013, however, the company raised £425 million from shareholders. In a vote of confidence, Chinese conglomerate Fosun bought an initial stake in Thomas Cook in March 2015.

The group returns to profit for the first time in 15 years in 2015. However, two years later in 2017, Jet2Holidays overtakes Thomas Cook to become the second biggest tour operator in the UK, putting the tour operator profits under fresh pressure. Since May 2018, shares have fallen again – by more than 96%– amid Brexit uncertainty and intense competition in the tourism sector.

By May 2019, the group reported a record loss of £1.5 billion, triggered by an impairment charge on the 2007 MyTravel merger and a steep drop in summer sales. Thomas Cook appeared to have staved off disaster in August 2019, when it agreed to be rescued by Chinese conglomerate Fosun with its £900 million bailout plan, an increase from the initial £750 million in recapitalization. 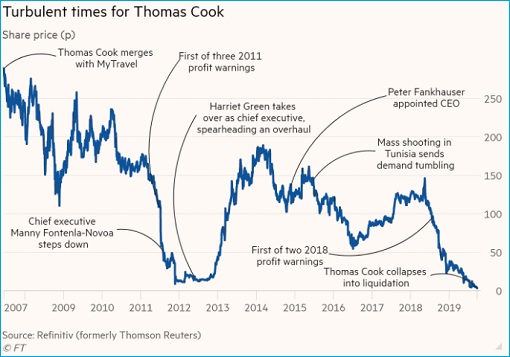 However, the banks didn’t appear to be serious. Royal Bank of Scotland and Lloyds Banking Group wanted another £200 million, betting the government would step in. By now, Thomas Cook has accumulated a jaw-dropping £1.6 billion (US$2 billion) of debt over the last 10 years. So the financial problem didn’t happen overnight.

Since the disastrous 2007 merger deal to Brexit, weather, terrorist attacks, competition, risk-averse banks, budget airlines and whatnot, the management of the world’s oldest tour operator had been pressing all the wrong buttons.Thomas Cook employees, who will soon be jobless, said they have been backstabbed by their own company.

Meanwhile, frustrated travelers and employees have also pointed fingers at the government’s failure to bail out the firm. Refused to use taxpayers’ money to rescue the company, UK Foreign Secretary Dominic Raab said that the government would not “systematically step in” to save businesses unless there was a “good strategic national interest.” 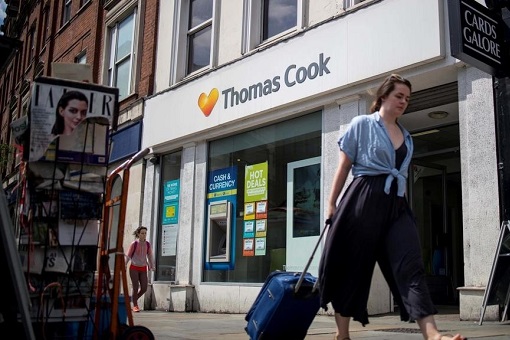 British Prime Minister Boris Johnson argued that bailing out Thomas Cook would set up a “moral hazard” and create a “bad precedent”. The company, with its catchy tagline – “Don’t just book it, Thomas Cook it!” – must be responsible for dealing and fixing with its finances, said PM Johnson. But not everyone is tearful about the demise of Thomas Cook.

The bankruptcy of Thomas Cook would cut overcapacity in the industry. British low-cost airline Jet2 has warned that its prices may rise as a result of higher demand for flights following Thomas Cook’s collapse. Stock prices of European airlines and tour operator TUI rose to the top of the benchmark during morning trade, with Britain’s easyJet also surging higher on the news.