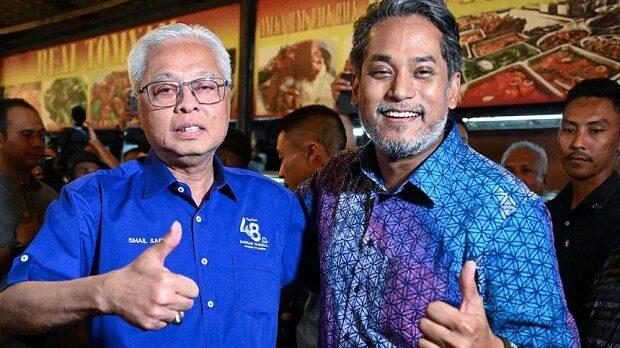 KUALA LUMPUR: The status of Khairy Jamaluddin’s Umno membership may only be known on Friday (Jan 27).

Earlier on Wednesday (Jan 25), party deputy president Datuk Seri Mohamad Hasan said a decision would be made in the evening.

Members of the media then congregated at party headquarters here to await news but no Umno bigwigs were seen.

It is learnt that a supreme council meeting will be held on Friday and among the matters to be discussed is Khairy’s membership.

Previously, Khairy had openly stated his aim of cleaning up the party if he won the Sungai Buloh parliamentary seat in GE15.

He also alleged that there was a conspiracy by some delegates to “bulldoze” through a no-contest motion at the recent general assembly so the top two posts would not be contested at the upcoming party polls.   ANN

No meeting to decide on KJ today – Umno sources

There is no Umno meeting today to decide on the fate of Khairy Jamaluddin – an ardent critic of party president Ahmad Zahid Hamidi.

Party sources confirmed this when asked to clarify reports citing Umno deputy president Mohamad Hasan as saying a meeting on Khairy would be held this evening.

“There is nothing today. No management meeting nor a disciplinary board meeting,” a source told Malaysiakini.

“Maybe on Friday night there will be a supreme council meeting,” the source added.

However, the source could not confirm if Khairy’s membership would be discussed at the next supreme council meeting.

The confusion over the meeting appears to have been due to a response Mohamad gave at a press conference this afternoon.

Asked about disciplinary action against Khairy, the Umno deputy president replied: “Petang karang (later this evening)” but he did not elaborate.

Mohamad has not denied earlier reports

This led to various news outlets reporting Mohamad as saying the meeting would be held this evening.

As of writing, Mohamad has not issued a statement denying the earlier reports.

Khairy had recently praised Umno members who had filed a report with the Registrar of Societies (ROS) over the move to ensure that the party’s top two posts remain uncontested in the upcoming polls.

Among others, he had described the move as amounting to “madness” and stifling democracy in Umno.

In the last general election, the former health minister failed in his bid to wrest the PKR stronghold of Sungai Buloh.

The son-in-law of former premier Abdullah Ahmad Badawi claimed he was forced to give up his previous Rembau seat in Negeri Sembilan for Mohamad.

During the campaign period, Khairy attempted to distance himself from Zahid, who is saddled with a deluge of corruption cases.

“I don’t want to stop in Sungai Buloh simply because competing here is the biggest challenge in my political career. It’s not easy to win here, but if I win, I want to bring us all, not now but maybe in the next five or 10 years to lead the leadership of the country.

“I also want to bring change to my party (Umno) and want Umno to be seen again as a noble vessel for the Malay community. Nowadays, many people meet and tell me it’s not that they don’t like Umno but they don’t like some (individuals) in Umno.

“The media should not compare me to (my party) president but this is the truth and the reality. My friends and I want to return Umno as a Malay political body that is noble, clean, evolving, that has good leaders and can be trusted like it was in the past,” he had said.

His remarks drew the ire of those aligned with Zahid, such as Umno supreme council member Mohd Puad Zarkashi.

Khairy had planned to contest the Umno president post. In the 2018 party polls, he came in second after Zahid in a three-cornered fight which also featured veteran Tengku Razaleigh Hamzah.  MKINI