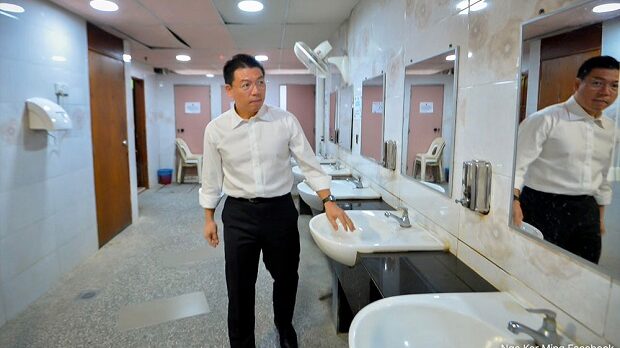 Dirty, smelly toilets are an inconvenience for many Malaysians, but it gets more unpleasant when they are at an establishment that serves food and drinks.

The government is considering an ultimatum for serial offenders, requiring food and beverage (F&B) operators to clean up their act before they can renew their business licenses with the respective city councils.

Local Government Development Minister Nga Kor Ming said his ministry is currently discussing the matter and plans to implement it next year.

In an interview with Chinese media last Tuesday (Jan 17), Nga was reported as saying the responsibility for toilet hygiene should not fall solely on local governments.

With the implementation of this new policy, he believes all F&B operators will pay more attention to the cleanliness of toilets in their shops.

“All F&B owners under the city council must keep their toilet clean and get an ‘A’ rating. Otherwise, we will reconsider whether to renew their licenses.

“But this has not been finalised yet. We will discuss and evaluate it internally this year before implementing it next year.

“The exact time will be announced, but I’m sending this message today to tens of thousands of restaurant owners across the country so that they can get ready,” added Nga.

In other words, he said F&B operators have one year to improve the cleanliness or renovate their toilets before they renew their licenses in 2024.

If the policy works well for city councils, Nga added that he plans to implement it for municipal councils and district councils in 2025 and 2026 respectively.

He also said he is ready to engage with industry players and stakeholders to collect feedback.

Earlier this month, the minister carried out spot checks on several public toilets in Kuala Lumpur and stressed that toilet cleanliness is closely related to the country’s image and tourism.

He borrowed the initials of luxury car BMW, saying that he wanted the country’s public toilets to be Bersih (clean), Menawan (attractive), and Wangi (pleasant smelling).

He also said his ministry will be giving out a ‘Toilet of the Year’ award in an effort to tackle the dirty public toilet issue in the country.

On a separate note, Nga said he will coordinate and discuss with state governments about the issue of land title conversion.

Under the current administration of Prime Minister Anwar Ibrahim, the jurisdiction of Chinese new village affairs has been returned from the National Unity Ministry to the Local Government Development Ministry.

However, according to the Federal Constitution and the National Land Code, the land titles of new villages are under the purview of the state governments.

According to Nga, the state government of Negeri Sembilan has taken the lead to submit its policy to the National Land Council for approval.

Once it is approved, the ministry would try to apply it across the country.

He believes Chinese new villages are qualified to secure permanent titles and could meet the “special circumstances” under the Land Code since they are a historical product of the Malayan Emergency and Communist insurgency.

However, Nga noted that possible opposition to this could come from Perikatan Nasional, accusing the coalition of continuously playing up racial sentiments.