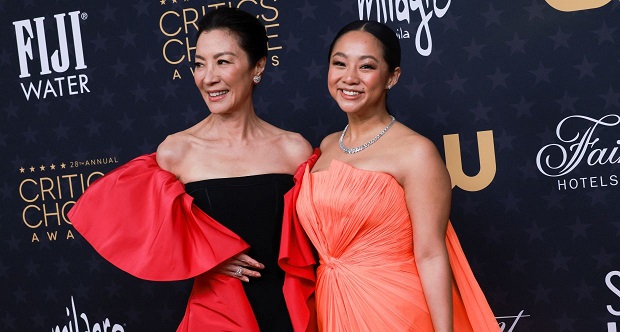 Michelle Yeoh nominated for Best Actress at the Oscars; first Malaysian to achieve such feat

Looks like the Year of the Rabbit is off to a good start for Malaysia’s beloved actress Tan Sri Michelle Yeoh.

Yeoh, 60, has just received her first ever Oscar nomination in the Best Actress category for her role in Everything Everywhere All At Once. This also marks the first time a Malaysian has been nominated in the Academy Awards.

The announcement was made today (Jan 24) at the Samuel Goldwyn Theater in Beverly Hills, California where actors Riz Ahmed and Alison Williams hosted the livestream event.

Yeoh is up against Cate Blanchett (Tar), Ana De Armas (Blonde), Andrea Riseborough (To Leslie) and Michelle Williams (The Fabelmans) for the award.

Everything Everywhere All At Once received 11 nominations in total, making it the lead contender at the 95th Academy Awards.

The multiverse-skipping movie, which sees Yeoh portraying a laundromat owner, has been a frontrunner in the awards circuit the past couple of months, winning accolades after accolades for Yeoh, Quan as well as the directors, The Daniels (Daniel Kwan and Daniel Scheinert).

Earlier this month, the Ipoh-born actress took home the Best Actress In A Musical Or Comedy Motion Picture at the 80th Golden Globe Awards, making her the first Malaysian to achieve such feat.

If Yeoh wins the Oscar, she will, again, be the first Malaysian to walk away with the most coveted acting honour in Hollywood. Additionally, she will also be the first actress of Asian descent to win in the Best Actress category in the Academy’s 95-year history.

However, she faces stiff competition from the formidable actresses nominated in the category, especially Blanchett who bested Yeoh at last week’s Critics Choice Awards for Best Actress.

Apart from the Oscars, Yeoh has also been nominated for Best Actress at the Baftas, the British equivalent of the Oscars, and Screen Actors Guild Awards (SAG).

According to trade publications in Hollywood, the SAG Awards – to be given out Feb 26 this year – are usually seen as an indicator of who will win in the acting categories at the Oscars as these accolades are given out by actors who also comprise the largest voting block in the Academy.

In recent years, Yeoh’s popularity has skyrocketed in Hollywood with starring roles in blockbusters such as Crazy Rich Asians, Shang-Chi And The Legend Of The Ten Rings and Avatar: The Way Of Water.

She’s slated to star opposite Kenneth Branagh in the Agatha Christie mystery A Haunting In Venice and appear in the film adaptation of the Broadway musical Wicked.

The 95th Academy Awards will be held on March 12 in Los Angeles and hosted by Jimmy Kimmel.