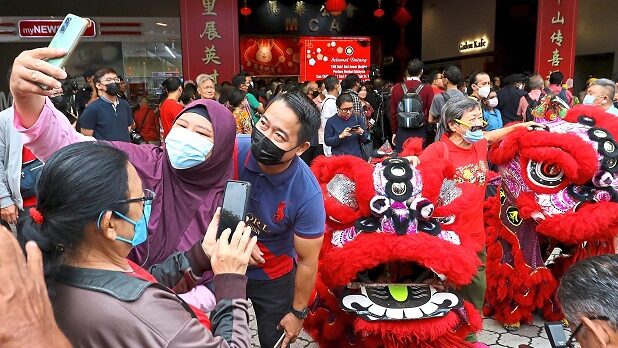 KUALA LUMPUR: The Chinese New Year celebration was a grand affair for the MCA as the party ushered in the Year of the Rabbit in the spirit of unity.

Held at the party’s headquarters at Wisma MCA here on Sunday, Malaysians of all ethnicities thronged the open house.

The public and VIPs were treated to a traditional lion dance and an orchestra performance, with the highlight being the tossing of yee sang to shouts of “huat ah!” (prosperity to all).

Rosli Ahmad, 56, from Kepong, among the hundreds who attended the event, said he was happy to be a part of the huge multiracial crowd.

“I feel blessed to be among Malaysians of all races. As Malaysians, we are proud of all our festivities,” said Rosli, who attended with his wife for the first time. K. Anjali, 25, said she did not want to miss out on the opportunity to be a part of the celebration.

“The food was good and it was nice to see Malaysians coming together,” she added.

The event also saw nostalgic moments as old friends caught up with each other, with special guest Prime Minister Datuk Seri Anwar Ibrahim saying it was nice to see them all.

“I met a lot of old friends. The MCA is an old friend too and it is good that the kinship has remained despite the differing views from time to time. Now we are back (together),” he told reporters.

He said with much common ground with the MCA now, the government’s priority was the economy and national development.

Anwar, who was accompanied by his wife Datuk Seri Dr Wan Azizah Ismail, was clad in a striking red batik shirt. They were welcomed by Dr Wee and his deputy Datuk Dr Mah Han Soon, MCA secretary-general Datuk Chong Sin Woon, and other top party leaders.

Deputy Prime Minister Datuk Seri Dr Ahmad Zahid Hamidi, who was also present, said he hoped the Year of the Rabbit would bring prosperity to all Malaysians and further unite them.

He acknowledged the new political landscape in the country and said it was good sign that Anwar had come to the open house.

“We have to accept that Malaysia has to be rebuilt with the uncertain economic climate, which may be tough but not impossible if we all join hands,” said the Barisan Nasional chairman.

Dr Wee said the MCA was honoured by Anwar’s attendance, adding that it made the open house all the merrier.

“Indeed, Chinese New Year is celebrated by all races, so this time, we invited everyone,” he added.

Dr Wee said when he paid a courtesy call on the Prime Minister recently, Anwar immediately accepted his invitation to attend the open house.

“So, we can see that the atmosphere is lively, compared with last year when there was a strict adherence to the Covid-19 SOP,” he said.

He said it was a good sign that the event was attended by party leaders from across the political divide.

“We are supporting the unity government and we need to cooperate despite our political leanings,” he added.