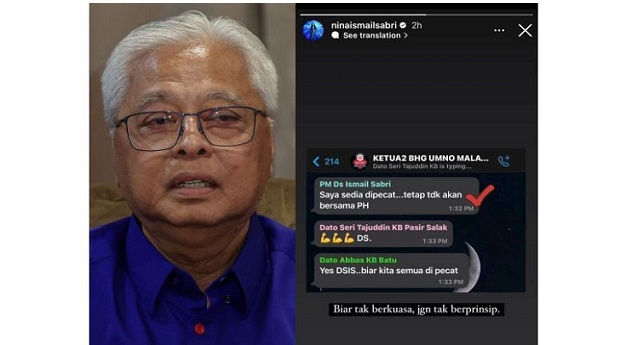 The Umno vice-president said he would have discussions with the people of Bera first.

PETALING JAYA: Umno vice-president Ismail Sabri Yaakob will seek re-election as head of Bera division but remains undecided on whether to defend his vice-president’s post in the party elections this year.

He said it was “too early” to decide about the vice-presidency. “I have to discuss with the people of Bera first,” he said, according to Astro Awani.

“We will move forward with Bera, the rest can wait. We will discuss this. Just wait for my announcement (on the matter),” he said. Ismail is also MP for Bera, which he has represented since 2004.

He said the Umno general assembly last weekend had decided that the positions of vice-president and below would be open for contest.

He added that the decision seemed to be “final” and that there would be no contest for the positions of president and deputy president.

It had been reported that Umno was split on whether a contest for the top two posts should be held, with some saying it risks dividing the party, and others arguing that it would allow president Ahmad Zahid Hamidi and his deputy, Mohamad Hasan to prove that they have the support of the grassroots.  FMT

PETALING JAYA: A speculated challenge by Alor Setar Umno over the party’s decision for the top two posts to be uncontested appeared to have fizzled out, with the divisional committee now expressing full support for the decision.

Kedah Umno infomation chief Shaiful Hazizy Zainol Abidin said the division’s position on the matter was made clear following a meeting between its committee with its Puteri, Wanita and youth wings as well as its grassroots.

He said, according to a statement from acting Alor Setar Umno chief Zambri Mat, all members of the division have backed the national party’s decision, made at the Umno general assembly last weekend.

Yesterday, Ahmad Shokri Yaacob, a division committee member, had told FMT of plans to submit a formal protest to the Registrar of Societies (RoS) about the decision for the posts of president and deputy president to be uncontested at the party elections this year.

He said the matter will be discussed at the division level and that the protest was to “ensure democracy thrives in Umno and that every action is done according to the party constitution”.

However, Shaiful said the motion at the general assembly had been “proposed, debated and voted on in accordance with the appropriate democratic procedures”, according to Sinar Harian.

On Tuesday, Umno vice-president Ismail Sabri Yaakob had said that party members who did not agree with the decisions of the general assembly had the right to voice their objections.

Ismail said the no-contest motion was invalid and contrary to the party’s constitution.

Former divisional chief Yusof Ismail, who has been suspended by the party, said Umno members had the right to ask the RoS to scrutinise the no-contest motion.  FMT