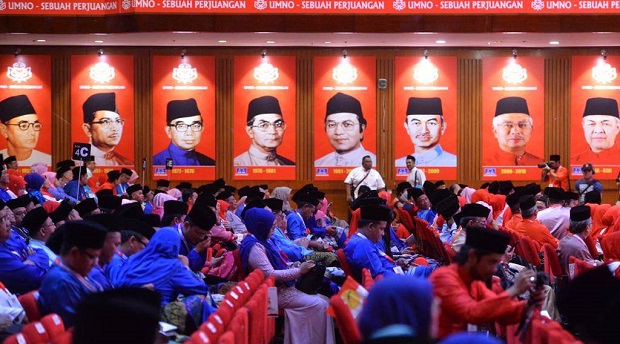 After recording its worst performance in a general election, Umno is having its first annual general assembly (AGM) which should serve as a platform for party delegates to discuss how to chart the party’s future direction.

This was especially important since the party, now more than ever has only months before they go through yet another series of tests – in the form of six state elections – to assert its relevance in national politics.

However, the meetings seem to have gone towards a more personal direction for its top leadership instead.

Rather than deliberating plans to overcome mounting challenges, top Umno leaders appear more focused on defending their decision to steer the party towards working with Pakatan Harapan and quelling internal dissent.

In a strongly worded policy speech, it appears that Umno president Ahmad Zahid Hamidi was more interested in using the AGM to strengthen his position, which was understood to have much to do with the upcoming party election where he faces the risk of “being punished” for Umno’s dismal performance at the polls.

And instead of doing some soul-searching, the top party leader went on the criticise those who had abandoned Umno when BN tasted its first electoral defeat in 2018.

“I could also list out here… some of our election candidates tarnished the image of this party. They said that Umno is a party that is corrupt, Umno had been damaged, lost its way, and many other criticisms were thrown at Umno.

“These speeches had been used by the opposition as ammunition to attack Umno, but now this ‘tortoise tries to get out of its shell again’,” he said, hitting out at a certain party leader, who is understood to be a potential challenger to Zahid for the Umno presidency.

Both Zahid and his deputy Mohamad Hasan had also gone all out to allay grouses among party grassroots over Umno’s decision to form a unity government with Harapan, a move that was against the party’s own “No Anwar, No DAP” resolution adopted last year.

Mohamad in his speech at the launch of Umno wings’ assemblies on Wednesday laid out a blow-by-blow account of how they arrived at the decision.

The defence minister also proposed that the party should now change its approach towards the non-Malays, saying that its long-standing sentiment against DAP had not helped the party gain more support from the Malays.

Perhaps the only concrete suggestion made during the first three days of the AGM was when Mohamad called for Umno to return to centrism in order to win Malay and non-Malay votes.

However, this vital message gained little traction from the delegates.

Zahid also laid out five “new” directions for the party to move forward, while Umno secretary-general Ahmad Maslan in his speech today spoke about a formula for party members to maintain Umno’s popularity among the rakyat.

However, it is to note that their ideas were very general and lacked depth – with nothing bold or drastic being mooted to revitalise Umno.

“The best formula for us is to do this: during the day, night, dawn and dusk, we must always work. We must always attend all kenduri, visit those who are sick, help the people during disasters and be at funerals. We must be there,” Ahmad was reported as saying.

In his policy speech, Zahid also went in with guns-blazing against his rivals in the party whom he accused of backstabbing Umno by plotting the “St Regis Move” to support PN chairperson Muhyiddin Yassin to form a government.

At a closed-door briefing with party delegates a day earlier, he revealed the names of 10 BN parliamentarians who supposedly signed statutory declarations in support of the Pagoh MP.

It was a calculated move that is aimed at paving his narrative against the supposed party traitors and riling up Umno delegates.

‘Forgive, but not forget’

Zahid’s narrative is understandably a part of his attempt to shore up support against his potential challengers in the upcoming party election.

Despite the attacks on internal rivals, he also tried to put on a magnanimous face, saying that he could forgive them but would never forget what they have done.

After initially saying he wants to move forward and leave the betrayal behind, Zahid was quick to jump on the delegates’ cry for the traitors to be punished and told them it would be soon if the assembly gives such a mandate to the Umno disciplinary board.

It remains to be seen if Zahid has the courage to go all the way to stamp out dissent in his party.

Perhaps he is wary of a potential pushback if he cracked down his rivals on his own and wanted to further divide the party.

The party’s top two leaders were also coy about having their positions open for contest in the next party election.

Mohamad had earlier said he was ready to defend the deputy presidency but preferred that top party posts were left uncontested, supposedly out of concern of creating a split within Umno.

Meanwhile, Zahid in his speech left the decision in the hands of the general assembly.

It was understood that while there was no mention of such a proposal in the written list of motions to be discussed by the delegates, it had been brought up by a delegate in a debate speech and saw some pushback.

However, the media could not gauge how far or heated the discussion had gone as the assembly’s debates are a closed-door affair. Only selected debate speeches were aired to journalists in a much-delayed telecast.

Based on Malaysiakini’s observation, Zahid’s war cry against internal foes appears to be working and gave him a stronger footing in the party.

This seems clear as delegates seemed to be riled up whenever “betrayals” are mentioned, and Zahid’s potential challenger – former vice-president Hishammuddin Hussein – might face disciplinary action.

Another possible challenger, Khairy Jamaluddin, has lost much of his political clout after getting defeated in the general election and holds no position in the party.

However, while Zahid may be able to shore up support to maintain his grip on Umno, it remains unclear how he will lead the party into the upcoming state elections.

Without clear resolutions by the AGM on its new direction, it seems that Umno may face another daunting task to rise from the ashes.