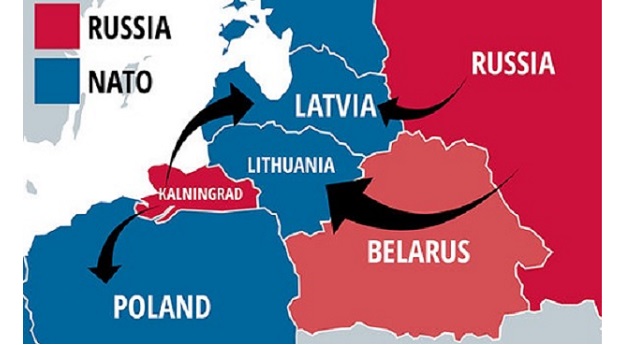 Belarus Could Invade Ukraine Any Moment – Might Escalate To Nuclear Weapons

As former U.S. Secretary of State Henry Kissinger called again for an urgent negotiation to end the war in Ukraine before it spread to the entire world, fear has emerged that Belarus could enter the war any moment now. Russian president Vladimir Putin has made a rare visit to Belarus on Monday (Dec 19), his first visit to the country since 2019 – sparking concerns that something is brewing.

Hours before Putin’s arrival to a red carpet welcome, Moscow unleashed a fresh round of “kamikaze drones” that damaged “key infrastructure” in Kyiv. While Belarus was not involved directly in the Ukraine War, it nevertheless has allowed Russian forces to use its country to to send tens of thousands of Russian troops into Ukraine as part of Putin’s “special military operation” beginning February 24.

In fact, Lukashenko has openly indicated that his country may join the Russian-Ukrainian war in preparation for the people of Belarus to enter the conflict. The country has about 65,000 troops. Hours before Putin’s visit, Belarus’ defence ministry announced the completion of yet another military drill, which Lukashenko had ordered to check the “combat readiness” of the nation’s army. 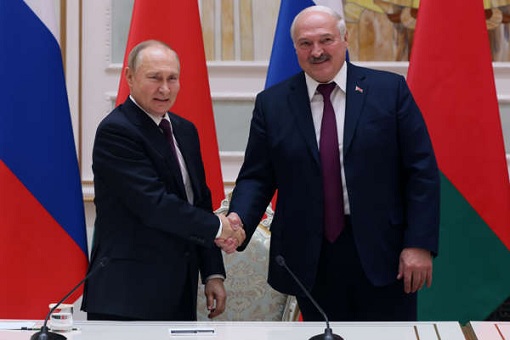 Some experts have rubbished the chance of Belarus troops, considered relatively weak, of entering the Ukraine War. However, a series of military drills held with Russia on Belarus’s border over the previous months have raised concerns that Lukashenko might have no choice, but to comply with Putin’s pressure to eventually enter the conflict, which the Russian president said could be a “long war”.

That doesn’t mean Belarus forces will engage actively against Ukraine forces, a move that could present a political risk for Lukashenko, who survived a protest movement in 2020. It could be a Putin’s tactic to keep Ukraine troops busy, locking up Ukrainian forces near the border to prevent their deployment to other areas. At the same time, Putin could be sending a message to the West.

Ukrainian President Volodymyr Zelensky has requested more military and defense support. U.S. officials say they are planning to send a Patriot missile air defense battery to Ukraine to help shoot down incoming Russian airstrikes. Russia, meanwhile, has condemned any plan by Washington to send more advanced weapons, calling it a provocation and U.S. direct involvement in the conflict.

Already, several airfields deep inside Russian territory have been hit by drones apparently launched from Ukrainian territory, even though the attacks were believed to be operated by British and American military operatives. Ukraine has not claimed responsibility for the attacks, in line with its policies of not owning up to any sabotage of Russian infrastructure.

If Biden administration decides to deploy Patriot missile air defense, it could open the door to other more advanced offensive weapons to attack Russian territory. This will certainly cross Moscow’s “red line” – contradicting Washington’s claims that it is not enabling Ukraine to strike beyond its borders and would never encourage Ukraine to strike beyond its borders.

The U.S. could be testing the water – trying to find more loopholes to attack Russians deep inside their territory by launching drone strikes from Ukrainian territory. However, by dragging Belarus into the war, Russia could change the conflict landscape and put the entire Europe and NATO members at risk. As a start, a joint Belarus-Russia military command could be created.

Speaking at a joint press conference in Belarus, Lukashenko and Putin said that they agreed to continue a series of joint military drills that have caused alarm in Ukraine. Lukashenko called Russia “his closest ally and strategic partner” and said that Belarus could not protect its “independence alone”. Belarus heavily relies on Moscow for discounted oil and loans.

Rejecting any idea that Russia could merge with Belarus, Putin said Moscow has no interest in absorbing Belarus, its closest ally. Instead, he said both countries will jointly manufacture arms. Russia will also continue to train Belarus troops to fly Soviet-design aircrafts capable of deploying nuclear weapons. Putin has provided Belarus with Iskander short range missiles and S-400 air defence systems.

Belarus not only borders Russia and Ukraine, but also Latvia, Lithuania and Poland. So, the target might not be Ukraine, but those European Union nations. Recently, Belarus troops and tanks have moved closer to the borders of Poland and Lithuania.The conflict, if it spills over, could involve nuclear weapons. Tens of thousands of Russian troops and war machines are freely moving within Belarus.  FINANCE TWITTER

WASHINGTON ― Ukrainian President Volodymyr Zelensky is expected to visit the White House and the US Capitol today, though security concerns could force a change in plans, two sources familiar with the planning said yesterday.

Punchbowl News first reported the possible trip, which would be Zelensky’s first known visit outside Ukraine since Russia launched its assault on the country on February 24.

Zelensky is expected to meet congressional leadership and national-security committee chiefs from the Republican and Democratic parties and could address a joint session of Congress, Punchbowl reported earlier.

Zelensky made a surprise trip to troops in the battered eastern frontline city of Bakhmut, underlining Russia’s stuttering but persistent attempts to capture it. In a Tuesday night video address, he referred to his trip to “Fortress Bakhmut” in Donetsk, one of the provinces Russia claimed in September but most countries reject as illegal occupation.
Zelensky last left Ukraine for the Munich Security Conference on February 19, according to his official schedule. His spokesman did not immediately respond to a written message seeking confirmation.

Earlier yesterday, US House of Representatives Speaker Nancy Pelosi said there would be a session of Congress on Wednesday night which would have a “very special focus on democracy.”

Pelosi’s remarks, which came in a letter, did not elaborate on what the session would be about. Her office did not immediately respond to a request for comment on the reported visit by Zelensky.

US Representative Marcy Kaptur, co-chair of the Congressional Ukraine Caucus, told CBS News there were ongoing efforts to bring Zelensky to the Capitol on Wednesday and to have him address Congress.

“We’d be very honoured to have him visit. I’m amazed he can make it in view of the situation. It’d be a great gift to have him at the Capitol. We’re working with the leadership to be helpful. We personally understand if he cannot make it last minute,” Kaptur was quoted as saying by CBS News. ― Reuters