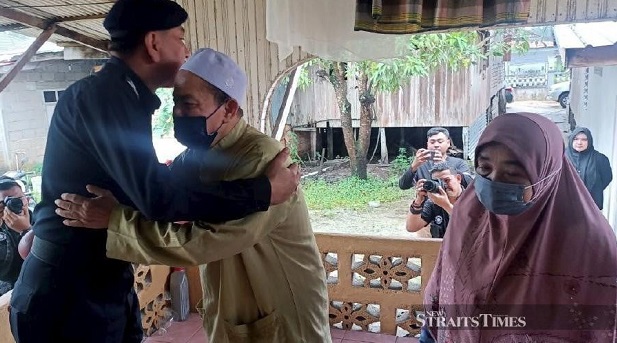 ‘God has taken away all my daughters’

TUMPAT: For most mornings, Mohd Nadzir Mohamed, would wake up to the cheerful sounds of his daughters going about their routine as they prepare for the day.

They would ask him what he wanted for breakfast and make it for him before proceeding to cook ‘kuih’ which would be sent to a nearby coffee shop to be sold.

However, all that’s left for the 67-year-old of them are mere memories. Three of his daughters, Nurul Syazwani, 33; Sakinah, 29, and Noor Fathiah, 27, were electrocuted to death while wading through flood waters in Kampung Bendang Surau, Morak, near here yesterday.

He said he missed hearing their voices in the morning.

“All my daughters, especially Nurul Syazwani, was the one who prepared meals for the family and would cook up a storm.

“Fathiah and Sakinah were good in making `kuih-muih (desserts) and it was my daily routine to send the food to the coffee shop to be sold.

“I really feel their absence. Allah has taken all my three daughters and now I only have my five sons.

“But we accept Allah’s plan for us,” he said when met today.

In the 11.45am incident, the three sisters were electrocuted when one of them touched a pillar with a live current running through it while wading through the floodwater.

Prior to the tragedy, the sisters had wanted to check out the flood in their neighbourhood and even took pictures that they shared on the family’s WhatsApp group.

Nadzir said he was still haunted by the image of his daughters’ lifeless bodies in the floodwater.

He also appealed to the public to stop sharing videos and images of the incident, which have since gone viral.

“I am not angry, but knowing the video clips were being shared has only made us sad,” he said.

Earlier, Kelantan police chief Datuk Muhamad Zaki Harun paid a visit and made a personal contribution to the family.  NST

The Malaysian Meteorological Department (MetMalaysia) in a statement said torrential rain (danger level) is expected to occur in Terengganu while continuous heavy rain (severe level) is expected in Kelantan involving the areas of Tumpat, Pasir Mas, Kota Bharu, Jeli, Tanah Merah, Bachok, Machang, Pasir Puteh and Kuala Krai and in Pahang, areas in Kuantan, Pekan and Rompin would be affected.

Continuous rain at the alert level is predicted in Gua Musang, Kelantan; Jerantut and Maran in Pahang as well as Segamat, Kluang, Mersing, Kulai, Kota Tinggi and Johor Bahru in Johor.

KUALA LUMPUR: The number of flood evacuees nationwide continues to climb, with 67,214 people from 18,450 families currently at shelters up to 2pm today.

Minister in the Prime Minister’s Department (Sabah, Sarawak Affairs and Special Functions) Datuk Armizan Mohd Ali said the victims were from 20 districts in five states affected by the northeast monsoon.

He said 469 flood shelters had been opened.

“Cumulatively, since the northeast monsoon hit in early November, 92,157 people had been displaced in 11 states,” he said at a press conference in the Parliament media room today.

The donation was handed over by FGV Holdings Bhd non-independent and non-executive chairman Datuk Dzulkifli Abd Wahab.
Armizan said the flood situation was under control.

He said the Malaysian Meteorological Department has also issued a new forecast of monsoon rains until Sunday.

The donation was handed over by FGV Holdings Bhd non-independent and non-executive chairman Datuk Dzulkifli Abd Wahab.
Armizan said the flood situation was under control.

He said the Malaysian Meteorological Department has also issued a new forecast of monsoon rains until Sunday.  NST