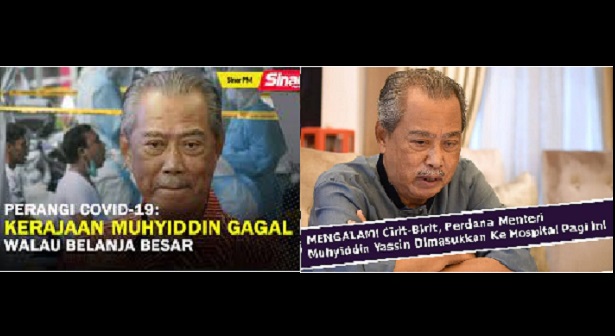 When Muhyiddin Yassin confronted Prime Minister Najib Razak over the infamous 1MDB scandal in 2015, he was sacked. However, the former deputy prime minister did not go against his boss because he was disgusted with the corruption and money laundering involving the 1Malaysia Development Bhd sovereign funds. Rather, power-hungry Muhyiddin saw an opportunity.

Muhyiddin saw the 1MDB scandal as his best chance to topple and subsequently replace his scandal-plagued boss. Make no mistake – he was as corrupt as Najib. After all, it was Muhyiddin as Agriculture Minister who approved the dubious RM250 million loan to Minister Shahrizat Jalil on Oct 27, 2006 on a project called NFC (National Feedlot Corporation) – popularly known as Cowgate Scandal.

If you believe Mahiaddin (Muhyiddin) didn’t get his cut, you should also believe that Joe Biden is still a virgin. Mahiaddin thought he could easily pressure Najib to resign. But he was incredibly shocked when the PM boldly fired him instead. He cried and ran to former PM Mahathir Mohamad, who kindly welcomed him and together they fought Najib by joining forces with opposition Pakatan Harapan.

When Najib-led Barisan Nasional government lost power for the first time in the 2018 General Election, Mahiaddin again saw his golden opportunity. He finally became the 8th Prime Minister – through the backdoor – when he betrayed his friends and allies, withdrawing support for the Pakatan Harapan government and formed Perikatan Nasional regime with defeated Barisan Nasional and extremist PAS Islamist party.

Not only Mahiaddin was Malaysia’s first backdoor prime minister, his legitimacy was being questioned as he had never allowed the Parliament to table a vote of confidence. When he was sworn in on March 1, 2020, he did not have the minimum 112 MPs to form a simple majority government in the 222-seat Parliament. He shut down the Parliament under the pretext of fighting Covid-19.

Ruling with absolute power during a State of Emergency, there were no check and balance during Muhyiddin’s 17-month regime. From confusion over lockdown rules and snail-paced vaccination to U-turns in policies and double standards in enforcing restrictions, the backdoor government that came to power thru treachery and betrayal was pressing the wrong buttons for months.

Yet, the unemployment rate had skyrocketed to 4.8%, foreign direct investments (FDI) have dropped by 68%, some 32,000 small-and-medium-businesses have closed down, Fitch Ratings’ has downgraded Malaysia’s credit rating from A- to BBB+ and economy – GDP – has plunged by 5.6% – the worst contraction since the 1998 Asian Financial Crisis.

More importantly, the people – regardless of race and religion – simply did not feel any direct or spill over economic effect despite the various stimulus. Either PM Muhyiddin had lied through his teeth or massive amount of money had been siphoned or plundered away. The cat’s out of the bag after Anwar Ibrahim became the 10th Prime Minister after the 2022 General Election.

At a media conference after chairing the special Cabinet of the unity government on Dec 5, PM Anwar said his Finance Ministry had informed that there had been several breaches involving the Covid-19 funds. Apparently, there were some dubious expenditures involving the RM600 billion. Of course, Muhyiddin has claimed innocence, claiming he did not misappropriate funds.

But the former backdoor PM was visibly panicked during his campaign in the delayed Padang Serai election. Using monarch-connected Tengku Zafrul as shield, he told the newly crowned PM Anwar to ask the former finance minister for answers. He finally admitted that despite the boastful RM530 billion stimulus packages, it only involved RM80 billion in government expenditure. 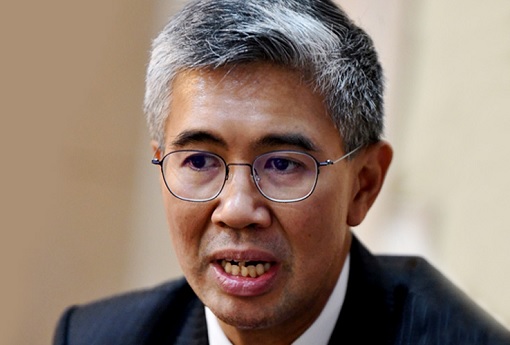 Anwar warned Muhyiddin not to challenge him because based on the files and information in his hands, there were indeed funds misappropriated from projects awarded to companies linked to Muhyiddin’s family members. At least tens of billions of Ringgit of people’s money were suspected to have had been swindled during Muhyiddin’s administration.

Interestingly, the new Malaysian government has suspended Treasury secretary-general Asri Hamidin and is set to replace him, one of the most powerful posts in the civil service. The suspension of Mr Asri, who was appointed in April 2020 when Mahiaddin was prime minister, suggests that the secretary-general was somehow involved in the misappropriation of government funds.

By now, everyone knows how Muhyiddin likes to issue empty threats. He used to threaten governing partner UMNO that the fragile government would easily collapse if he “presses the button”, only to stay silent when his bluff was called. Today, he again plays his version of the childish poker game with Anwar, hoping to pull off a bluff. But the PM is calling his bluff.

The Malaysian Anti-Corruption Commission (MACC) will now grill Muhyiddin, Zafrul and former health minister Khairy Jamaluddin in the investigation of the misappropriation of RM600 billion government funds. The involvement of Khairy means that the scandal could involve the procurement of Covid-19 vaccines, which had already invited suspicions due to lack of transparency. 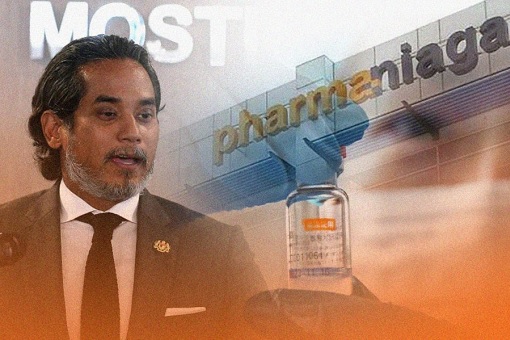 In early December 2020, Khairy rubbished veteran lawmaker Tengku Razaleigh Hamzah’s claim that Malaysia’s vaccine deal with Pfizer cost the government RM3 billion, including RM1 billion for transportation and storage. The then-Minister of Science, Technology and Innovation had also rejected Razaleigh’s estimate that the cost per dose of the vaccine was RM234.

The claim that the government had used up the entire allocation of RM3 billion to cover just 20% of the population was denied by Khairy. Instead, he said – “Based on our current negotiations to acquire a portfolio of vaccines, we are still within our estimate of RM3 billion to acquire enough doses to cover 70% of our population”. In fact, Khairy confirmed in Nov 2020 that Pfizer vaccine will be priced at less than RM100 per dose.

Under the COVAX facility, Malaysia was offered a maximum price set for the Covid-19 vaccine at “US$21 (RM87.50) each”. Suddenly, in mid-March 2021, PM Muhyiddin announced that the allocation for the Covid-19 immunisation programme would be increased from RM3 billion to RM5 billion to reach herd immunity status faster by December, instead of February 2022.

Does it make sense to splash additional RM2 billion (or 67% more than the initial cost of RM3 billion) just to speed up the vaccination exercise by a mere two months? Fine, let’s assume Khairy failed his Math and made some mistakes in his calculations in Nov 2020, but in order not to lose face he made the correction and quietly asked for RM5 billion some five months later.

Stunningly, in just a month, the regime unilaterally passed a new emergency law to raid and rape the national trust fund of RM17.4 billion. Including the RM5 billion, the dictatorship of Muhyiddin could have wiped out RM22.4 billion in the “procurement of vaccines and any expenditure incurred in relation to the vaccines”. Thanks to the State of Emergency, nobody knows how the trust fund would be used.

Assuming the worst, it would mean a dose of vaccine would cost RM829 (27 million doses) or RM414 (54 million doses) to fully vaccinate 80% of the population. Regardless how you calculate, it appears the price for each dose of vaccine is higher than RM100 a pop. This also means Razaleigh was right after all when he estimated the cost per dose of the vaccine was RM234.

It doesn’t matter whether it was for the procurement of Pfizer or other brands of Covid-19 vaccines. The corrupt administration of Muhyiddin could use the same methodology and formula to mark-up the vaccine prices and makes tens of billions of Ringgit in profit. But this is just the tip of an iceberg. There is also the MySejahtera app scandal. The entire scandal is as huge as RM600 billion, making Najib’s 1MDB scandal looks like child’s play.

PM Anwar has also hinted that Perikatan Nasional chairman Muhyiddin could have obtained proceeds from gambling companies to help finance the 15th General Election campaign. Under Muhyiddin administration, special lottery draws were increased from 8 to 22, despite the anti-gambling stance of Islamist party Parti Islam SeMalaysia (PAS), which is part of the ruling Perikatan Nasional coalition.

The previous Pakatan Harapan government had reduced the number of special draws from 22 to 8 in order to minimise social ills caused by gambling. The special draws – which are a special addition to the regularly allowed three draws per week – normally involves a much larger winner’s pot. The government imposes an extra tax on special draws, providing an extra revenue on top of the regular gambling tax.

The special draws were especially designed to boost the government’s revenue. The special draws, which contributed RM80 million in extra revenue for the government in 1999 (the year it was first introduced during the premiership of Mahathir), reached a high of RM238 million in 2017, and averaged a revenue of RM200 million a year in recent years – money that enabled Perikatan Nasional spent lavishly on general election.

The fact that the MACC has opened investigation paper on the misappropriation of RM600 billion, and is summoning Muhyiddin, Zafrul and Khairy indicates that charges could be filed soon. Money laundering and criminal breach of trust (CBT) could be slapped on Mahiaddin and his band of crooks disguised as clean Malay and Muslim leaders. The chicken has come home to roost.