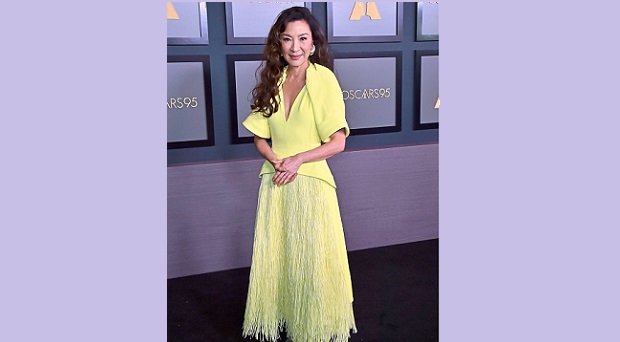 Will an Oscar come next for Yeoh?

PETALING JAYA: In the lead-up to the Academy Awards, Malaysia’s own Tan Sri Michelle Yeoh (pic) has been chosen as Time magazine’s “Icon of the Year”.

This is the second time she has been prominently profiled on the international magazine after she was named one of its “100 Most Influential People of 2022” in May.

This year alone, Yeoh has been involved in several movies including The School of Good and Evil, Minions: The Rise of Gru, Paws of Fury: The Legend of Hank, and the upcoming Avatar: The Way of Water.
However, it is the indie film Everything Everywhere All at Once, released in March, that is getting Yeoh all the rave reviews.

While the 60-year-old has starred in many American movies over the two decades since she made the leap from Hong Kong to Hollywood in 1997, she has never been No. 1 on the call sheet until this year with Everything Everywhere All at Once.

She told Time that it is because Asian actors have always been relegated to stereotypical or inconsequential roles.

“It shouldn’t be about my race, but it has been a battle. At least let me try,” the Ipoh-born actress said.

So when the plump role of an overworked and frustrated wife in Everything Everywhere All at Once landed on her lap, Yeoh gave it her all.

“When you get an opportunity like this, you have to pour your heart and soul into it, because you don’t know when the next chance is.

“I think that is my biggest fear: Please don’t let this be the one and only,” Yeoh said.

Her stellar performance in the movie is generating Oscar buzz for Yeoh.

Time wrote: “Yeoh is carrying an added weight in this year’s Academy Awards race: the understanding that victory for her would be received by Asians everywhere as victory for them too. No Asian woman has won Best Actress.”

Yeoh knows what a nomination and a win would mean, not only for her but to her legion of fans as well.

Earlier this year, Time named Yeoh one of its 100 Most Influential People of 2022.