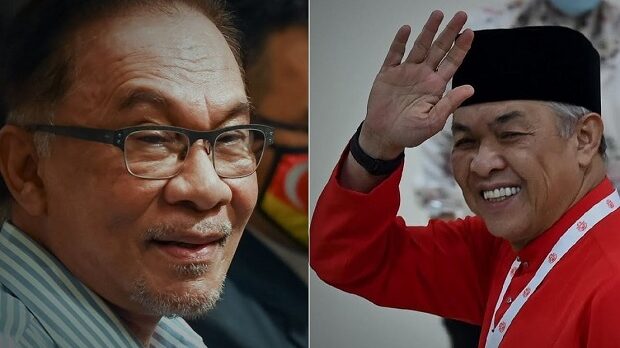 APPOINTING Ahmad Zahid Hamidi as the deputy prime minister is an act that goes against any intention to clean up the nation, Dr Mahathir Mohamad said today.

In his first comments on the new government, Dr Mahathir wondered how Zahid, who has a criminal case in court, was appointed deputy prime minister.

“Yes, it’s true, he hasn’t been punished but this person has been brought to court. If we have people like this as leaders, our country will be ruined.

“I think if we want to clean up the country, we can’t choose someone who everyone thinks is a criminal.

“So I wonder how Anwar (Ibrahim) can choose this person even though he is the leader of the party but he is facing accusations in court.

“Yes, that’s right, innocent until proven guilty. But if he is facing criminal trial, it shows that he (Zahid) is not fit to be a leader,” he was reported as saying in Kuala Lumpur.

Dr Mahathir believes that the appointment of Zahid to a high government post complicates the government’s efforts to rid the country of corruption and kleptocracy.

The new prime minister had said that Zahid should not be pre-judged even before he had been found guilty by the court.

He said the Umno president will remain in his cabinet until the court finds him guilty.

Zahid emerged as kingmaker after the recent election as the 30 MPs in Barisan Nasional were pivotal to Anwar forming a government.

In the recent cabinet line-up, Zahid was also named as the rural and regional development minister.

There are six Umno ministers in Anwar’s 28-member cabinet.