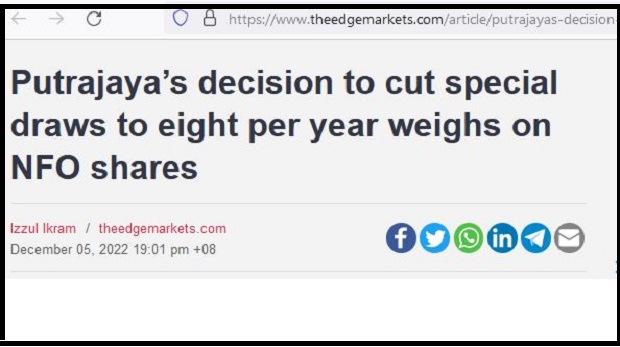 To The Chinese Supporters ‘Hal Enta Safeeh?’ Because It Looks Like You Are Disposable. 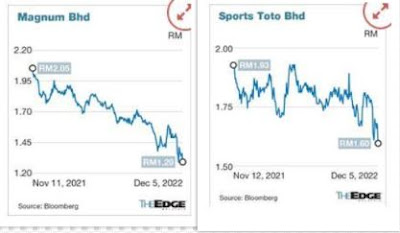 starting Jan 1, 2023, special draws by gaming companies, which were accepted by the Perikatan Nasional (PN) government for 22 times, will be reduced to eight times

‘Hal enta safeeh’ is arabic which means ‘Are you stupid?’

Hello Chinese supporters let me get this straight. The PAS and Bersatu fellows had increased the special draws to 22 per year.  Now your “secular” hero has reduced it down to 8 special draws per year !!

So does this mean that   wang haram (illicit money)  8 times a year is ok.

To all Chinese people, this type of behaviour causes real losses in the economy. Millions of Ringgit has already been lost in the share prices of Magnum and Sports Toto. I am sure some of you Chinese readers here have lost money as well.

These are real losses. You have become poorer.

Today the KLCI is down again, another 2.0 points.

Believe me this is just the beginning. And it is only 12 days since they took over. Dont know what else they will do in another 12 days. Or 12 months.
Now let me tell you the real story.

There are the by-elections at Padang Serai (Parliament) and Tioman (State DUN).

The Chinese vote for PH has reached its max. Maybe over 95% Chinese already voted for PH.

So they are playing religious sentiments. That is why you see the haram this, I can cancel that, haram money, illicit money etc.

Someone is also keeping a greedy eye on the 3.5 million Malay UMNO members.  His friend is the president of Umno. Umno has already been given SIX Minister posts. Plus DPM it means Umno actually has SEVEN Minister posts.

Finally Chinese people, here is the lion again. It is laughing at you. I think this lion will not stop laughing. At you.