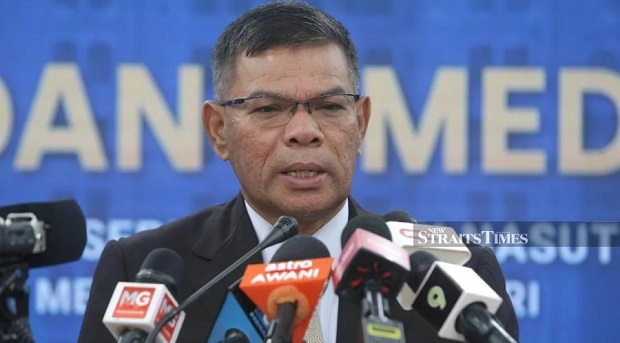 During his maiden ministerial briefing, Saifuddin said he was briefed by the Home Ministry secretary-general Datuk Wan Ahmad Dahlan Abdul Aziz on the matter.

“It will be in my top priorities that requires my deliberation and action in the ministry.

“We will scrutinise all aspects of it including the constitution, existing laws and also humanity,” Saifuddin said.

Previously, the Court of Appeal (COA) has allowed the government’s bid to overturn a landmark ruling which said that children born overseas to Malaysian mothers with foreign spouses were entitled to Malaysian citizenship.

Prior to the landmark High Court decision last year, overseas children born to Malaysian fathers were allowed to apply for Malaysian citizenship, but this did not apply to Malaysian mothers.

Earlier, Saifuddin clocked in for official duties at the ministry at 9.28am here today.

“I urge the government to immediately grant citizenship to adopted children who have obtained an adoption order from the court.

“The government should be grateful to the parents who adopted their children to realise the Keluarga Malaysia agenda,” said Yeoh in a statement today, adding that doing otherwise would prove the government to be hypocritical.

The Segambut MP said this “never-ending issue” was made more complex for those who have obtained an adoption order from the court under the Adoption Act 1952 but had citizenship applications rejected by the Home Ministry without reason.

“Parents and their adopted children have to face the various social impacts of getting their citizenship applications rejected.

“These parents go through a lot of stress and emotional pressure. They are unable to make short-term or long-term plans in the care of their adopted children,” she said.

Yeoh named several issues often faced by these families. Among them are:

‘Granting citizenship only has benefits’

Two months ago, fellow DAP lawmaker Teo Nie Ching similarly proposed that the government grant citizenship to all stateless children whose father is Malaysian if they can provide DNA evidence.

The Home Ministry previously refused to accept such evidence.

Likewise, Teo said all stateless children who are legally adopted by their Malaysian parents should also be granted citizenship.

Teo had also cited the Federal Court’s landmark decision on Nov 19 last year which ruled that abandoned babies should be recognised as Malaysians by operation of law.

Yeoh today argued that the government fails to understand that granting citizenship to adopted children who have adoption orders from the court can only benefit the government.

She said the most obvious benefits include reducing the government’s financial burden, assisting Malaysian parents who want to legally adopt a child, and reducing the number of abandoned children.  MKINI