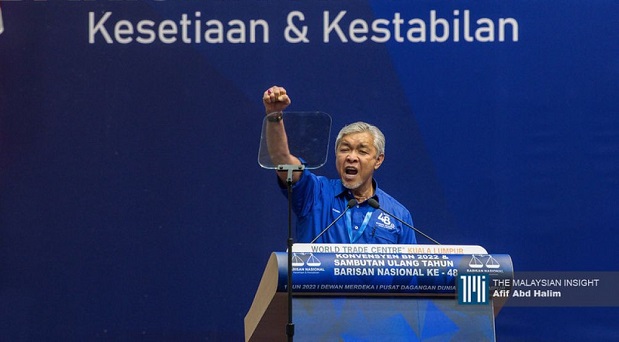 He said this coalition of political parties should be maintained for more than one term to make Malaysia great.

“Insya Allah (God willing) this cooperation is not just for five years, for 10 years, for 15 years (but longer), based on our sincerity to work together as one team, ‘a grand coalition’.

“The parties have come together to build a more glorious nation, and I am confident if this trend can be defended and the unity preserved, Insya Allah Malaysia will be greater,” he added.

The deputy prime minister was speaking at the Ayuh Malaysia mega ceramah for the Padang Serai parliamentary seat last night.

Zahid said he believed that under the unity government, Malaysia’s economy would become stronger, helping to overcome the cost of living problem and give foreign investors confidence to invest in the country.

He said if the prime minister passes the confidence test in parliament, the unity government supported by all races would become the strongest administration in the country’s history.

“New politics is not about race or religion. New politics in Malaysia needs a new political landscape where (people of) all races, all religions and all cultures are united as Malaysians,” he added.

Anwar said he was bewildered by the portrayal that he was shaking down Syed Mokhtar and targeting other Malay-owned conglomerates.

PUTRAJAYA — Prime Minister Datuk Seri Anwar Ibrahim today denied allegations that he had a bias against certain tycoons, stressing that he is not out to “destroy” the business empire of billionaire Tan Sri Syed Mokhtar Al-Bukhary who controls Malaysia’s sole rice importer.

Anwar, who is also finance minister, said he knew Syed Mokhtar personally and the latter had expressed a willingness to allocate RM10 million funds this year and RM50 million next year for cash-strapped paddy farmers.

“I never approved anything without negotiating, I know him personally, and I know he has several big companies. I do not mean to destroy his empire.

“I didn’t even manage to see him personally. Just a phone call and to ensure the future of poor paddy farmers, I took the necessary steps to negotiate with him.

“This is the first time I am saying, enough,” Anwar told reporters after clocking in at the Finance Ministry for the first time since his appointment.
Anwar said he was bewildered by the portrayal that he was shaking down Syed Mokhtar and targeting other Malay-owned conglomerates.

Among Anwar’s critics is Kedah Mentri Besar Muhammad Sanusi Md Nor who yesterday accused the PM of targeting Malay tycoons, and Syed Mokhtar especially because the latter was easily bullied.

Syed Mokhtar is ranked by Forbes magazine as Malaysia’s 15th richest man this year, said to be worth US$1.3 billion.

The 70-year-old self-made man holds the majority stake in Padiberas Nasional Berhad (Bernas) which controls some 30 per cent of the country’s rice distribution network.

Anwar said that prior to his negotiations with Syed Mokhtar, he had been informed of Bernas’ reported revenue and the tycoon explained the concessions were initially not given to him but to members of political parties.

“So Syed Mokhtar said to revert and return his cost and the ministry officials can negotiate further with him.

“But at the same time, since the revenues have been reported, to help the poor paddy farmers,” the prime minister said.

Anwar said the decision was not easy since he has to face some of the wealthiest conglomerates in the country.

“What is there to politicise? We do our best when we have the authority and I think we can negotiate carefully on how this will benefit paddy farmers,” he said.

Bernas is reported to control 30.6 per cent of the local rice market and also imports rice from Thailand and Myanmar to meet local demand.

The company is 92 per cent controlled by Syed Mokhtar through four private companies.

Bernas was originally the National Padi and Rice Board which was corporatised and privatised in the 1990s.  MM