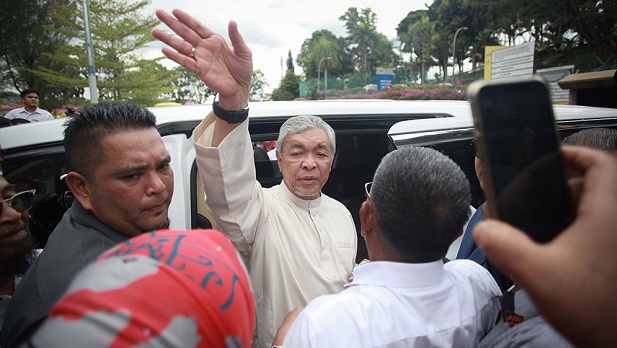 Newly appointed Deputy Prime Minister Ahmad Zahid Hamidi has called on all quarters to stop acts that could provoke anger, in order for the government to carry out its agenda of serving the people.

Taking to Facebook following the cabinet unveiling by Prime Minister Anwar Ibrahim last night, Zahid said he was humbled to be entrusted with the position.

“Thank you for the prime minister’s trust in me, and my colleagues in BN, to be in the cabinet.

“This trust is not spoils of war, but a heavy responsibility amidst a challenging global economic outlook,” wrote the Bagan Datuk MP.

Zahid will also lead the Rural and Regional Development Ministry, aside from the deputy prime minister’s post.

Elaborating, he said he was confident the government will be able to handle any challenges for Malaysians and the country.

“This is provided all quarters cease provocations and acts that can cause anger among the people.

“Let’s not disrupt peace and unity in the society, as well as the government’s efforts to improve the country’s economy,” said the BN chairperson.

Zahid, who is also the Umno president, further called for all Malaysians to come together to pave a brighter future, and put a stop to political instability that has caused the country much damage.

Although he did not specify to who he was directing his message, it comes in the midst of criticisms by various quarters over his appointment, as he still has corruption charges pending against him in the court. MKINI

Cabinet line-up not solely up to PM in unity govt, says Fahmi

PETALING JAYA: It is unfair to solely criticise the Prime Minister on the Cabinet line-up, adding that the list of candidates was determined by the respective parties and coalitions in the unity government, says Fahmi Fadzil.

The Pakatan Harapan communications director said having the parties and coalitions nominate their candidates was crucial to avoid internal conflict.

“Maybe Tan Sri Muhyiddin Yassin forgot, but this is not the Pakatan Harapan government where the Prime Minister (Datuk Seri Anwar Ibrahim) can appoint whoever he wants.

“This is a unity government where important policies or decisions will be made in consultation, including on appointment of Cabinet ministers.
“This is an important change to avoid mistakes that have occurred in every administration since 2018, where the appointment of the Cabinet is often made not according to the party’s main leadership.

“At that time, we witnessed the cartel groups in the party being weaponised and creating a “party within a party” situation which ultimately disrupted the internal political stability of the party.

“So different from the previous three administrations, and realising what has happened, the prime minister and the leaders of parties and coalitions in this unity government have agreed that the list of candidates for the Cabinet ministers will be determined by their respective parties or coalitions,” he said.

He however reiterated the prime minister’s commitment that the unity government would never interfere with judicial affairs in any case.

“Tan Sri Muhyiddin, stop the polemic attacks that confuse and try to confuse the people.

“It is important for us to remember that Tan Sri Muhyiddin himself has many issues that may need to be researched and investigated in the future, including the 1BestariNet issue and the RM500bil fund issue that is said to have been spent during the pandemic period,” he said.

Earlier, Muhyiddin had accused Anwar of reneging on promises of good governance he touted during the GE15 campaign period when he named his Cabinet line-up.

Labelling it as the “most disappointing line-up in the country’s history” Muhyiddin said having Ahmad Zahid who has a corruption case in his Cabinet line-up was akin to selling the nation’s dignity – simply because of his desire to become Prime Minister.

“This kleptocrat Cabinet, formed on the basis of fraud against the people’s mandate, does not have any legitimacy to function as the country’s highest executive body,” said Muhyiddin.

Ahmad Zahid’s appointment was criticised by many as he is still standing trial for a corruption case where he is accused of 47 criminal breach of trust, corruption and money laundering charges involving tens of millions of ringgit belonging to Yayasan Akalbudi, the charity organisation he founded.  ANN

The DAP representative said that the prime minister had offered him a position in the Cabinet, but he had declined the offer to focus on his role as an MP.

“I informed him that I was unable to do so and that I would focus on my role as an MP and assist the government in all ways I could,” he said on Facebook today.

In the line-up, Gobind’s previous portfolio was taken up by PKR information chief Fahmi Fadzil. It will now be known as the digital communications ministry.

The Cabinet comprises 15 members from Pakatan Harapan, through PKR, DAP, Amanah and Upko; six from BN, through Umno; five from Gabungan Parti Sarawak, through PBB, PRS and PDP; and one from Gabungan Rakyat Sabah, through Sabah Bersatu. Another is not a member of any party.  FMT