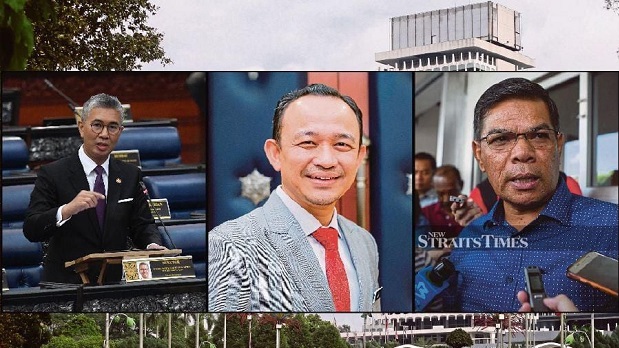 KUALA LUMPUR: The current focus on Putrajaya’s cabinet composition has now shifted to the Parliament building.

This is amid speculation that three cabinet candidates will be appointed senators and are expected to be sworn in soon.

However, minutes ago, the media was told that the swearing-in session has been postponed to 8.30am tomorrow.

Sources indicate that one the names that have emerged is PKR secretary-general Datuk Seri Saifuddin Nasution Ismail, who lost his bid for the Kulim Bandar Baharu parliamentary seat in the 15th General Election.

Also expected to be sworn is Dr Maszlee Malik, who lost his Simpang Renggam seat in GE15. It is now speculated that Maszlee, who was education minister under the former Pakatan Harapan administration, is hoping to make a comeback to the same post.

Another name that had surfaced in recent days and said to be vying for the finance minister portfolio is Tengku Datuk Seri Zafrul Tengku Abdul Aziz, who was the last person to hold the post.
RELATED STORIES:
Cabinet line-up announcement postponed to later tonight

Anwar Ibrahim is clearly no Mahathir Mohamad when it comes to punctuality.

Grand Old Man was rarely late to events and press conferences when he was the PM4 and PM7.

He assumed the post he after being appointed senator in 2020, under the government helmed by Tan Sri Muhyiddin Yassin.

He had in GE15 tried to secure a place in parliament, contesting the Kuala Selangor seat, which he lost.

The New Straits Times earlier today reported that the new senators would be sworn in today.

Sources had said that Dewan Negara officials have been instructed to be on standby for the swearing-in ceremony.  NST

KUALA LUMPUR: A Pas leader today said Datuk Seri Anwar Ibrahim’s inability to form a cabinet after more than a week in office is his “first failure” as prime minister.

Pas central committee member Dr Mohd Zuhdi Marsuki also questioned the country’s preparation in facing the possible large-scale floods, as reported by various agencies, following the delay in the formation of the cabinet.

“As per the government’s usual practice, special allocations would be channelled for rescue efforts and victims’ welfare.

“However, how can the allocations be managed if the ministers overseeing the matter has not been appointed yet?

“Similarly, how can the government make critical decisions in the event of a disaster when it is not appropriate for those decisions to be decided on only by the prime minister?” he asked on Facebook.

Zuhdi added that Pakatan Harapan was vocal against holding the 15th General Election because of the possible floods.
“Now, floods are likely to happen soon, but the prime minister has yet to prepare his machinery.

“Apart from that, Anwar’s delay in forming his administration is likely to cause the delay in the tabling of the 2023 Budget.

“What will happen to the country and the people if the 2023 Budget is still not approved after the new year?

“Clearly, Anwar has been very slow in naming the members of his cabinet despite the pressing situation right now.

“He has been busy with social activities, instead of taking swift action to activate his machinery.”

Earlier today, Anwar met the Yang di-Pertuan Agong, and he was believed to have submitted the proposed line-up of his cabinet to the king.

According to Bernama, his cabinet line-up was expected to be announced later today, and its members would attend a special meeting on Monday.  NST