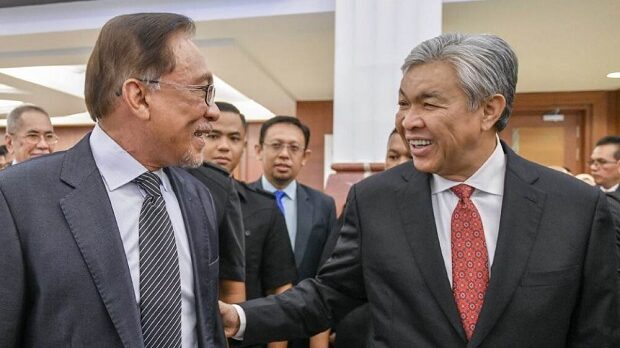 An Umno source has revealed that the Bagan Datuk MP has been nominated to take up the post, in line with his position as party leader.

“Almost certainly the Umno president is to be deputy prime minister, that’s all I can say, God willing,” he told Malaysiakini.

However, sources did not reveal which ministry was proposed for Zahid to lead.

Before this, speculations were rife that Zahid would fill the DPM post that was dedicated to BN as the main coalition partner of the new government.

Even some party leaders, such as Umno supreme council member Mohd Razlan Rafii, felt that Zahid should be given the position to stabilise the government.

Yesterday, former Umno secretary-general Annuar Musa stated that cabinet positions should follow the party hierarchy and that the prime minister should not take Umno’s support lightly.

Earlier this morning, Anwar appeared before the Yang di-Pertuan Agong, who is believed to have been presented with the new cabinet line-up.

The prime minister is expected to announce the cabinet line-up this evening, following the Agong’s approval.

Another source close to the Umno president also confirmed that Zahid was proposed as deputy prime minister.

“Yes, the name of the (Umno) president is proposed as the deputy prime minister,” he said briefly via WhatsApp.

Zahid was previously the deputy prime minister under the Najib Abdul Razak administration.

It is understood that BN will get five ministerial positions and six deputy ministers.  MKINI

PETALING JAYA: A former MP has cautioned that the reappointment of Tengku Zafrul Aziz as the finance minister would be bad for Prime Minister Anwar Ibrahim and the government he leads.

This comes amid increasing speculation that Tengku Zafrul could be reappointed to the post.

He served as the finance minister in the governments led by former prime ministers Muhyiddin Yassin and Ismail Sabri Yaakob.

“It won’t speak well for Anwar or the Cabinet, not least because Anwar and those closely aligned to him had made clear their thoughts on Tengku Zafrul’s performance while in power,” said the former MP who asked not to be named.

On the campaign trail for the 15th general election (GE15), Anwar was reported to have said that Tengku Zafrul was not even fit to serve as an MP.

According to a Utusan Malaysia report, he had said this citing Tengku Zafrul’s description of the depreciation of the ringgit as normal.

“When I was the finance minister, when the ringgit fell, I would call for an emergency meeting to find out why it happened,” Anwar had been quoted as saying.

“I did that because I did not want the people to suffer as a result of the ringgit’s depreciation.”

The source also questioned why Tengku Zafrul’s name was suddenly in the mix.

“He does not even have Barisan Nasional’s support to be the finance minister. BN wants Johari Ghani.

“There had been so much criticism of Tengku Zafrul during the pandemic and after. Imagine, even Najib Razak once told Ismail to ignore Tengku Zafrul over his stand against allowing the second round of EPF withdrawals,” the source said.

The former MP was referring to the time when Najib, the former prime minister, was pushing for a second round of EPF withdrawals to cushion the impact of the pandemic.

According to a Malaysia Gazette report, Najib had described Tengku Zafrul as “outdated” and said that Ismail, who was the prime minister at the time, should ignore him and instead listen to the plight of the people.

Earlier, it was reported that netizens had taken to social media to voice their concern over the possibility that Tengku Zafrul would be reappointed to the post.

In GE15, Tengku Zafrul stood as a BN candidate in Kuala Selangor and lost to Pakatan Harapan’s Dzulkefly Ahmad, who retained the seat with a majority of 1,002 votes. FMT

PM: Cabinet line-up to be announced this evening

In his speech at an event in Tambun, Perak, this afternoon, the 10th premier said he has presented the names of ministers to the Yang di-Pertuan Agong when he had an audience with the monarch earlier today.

“I have decided to present (the list of names) to Tuanku, and God willing, I will announce the cabinet line-up this evening,” Anwar said in his speech during a kenduri rakyat (feast for the people) event.

According to the Anwar, he had discussed with Sultan Abdullah Sultan Ahmad Shah several times to make sure that the cabinet can be formed as soon as possible.

He said there were hundreds who are qualified to be in the cabinet, but only a small number could make it to the list.

“Because we do not want too many ministers and special ambassadors with minister’s rank.

“Because we want to save the country’s money to give back to the rakyat,” he added.

It is understood that the announcement will be held at the Prime Minister’s Office in Putrajaya after 4pm.

However, the Prime Minister’s Office did not state a specific time for the announcement and instead told the media to stand by at the press hall by 4pm.

On his new cabinet, Anwar said that he would call for a special meeting this coming Monday to brief its members on “special rules”.

The rules include how they should treat the civil service, ways to handle policy announcements and how to save the money of the taxpayers.  mkini