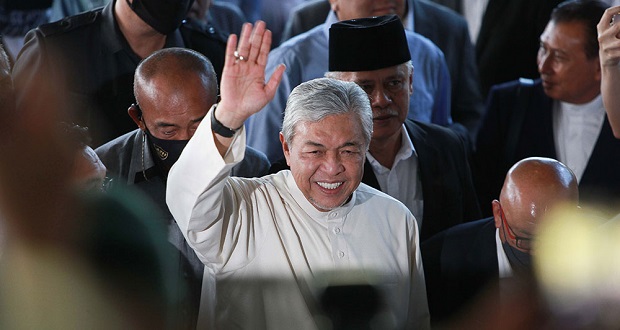 THIS may sound incredible, but a campaign of sorts has started in Umno to push Datuk Seri Ahmad Zahid Hamidi for the deputy prime minister (DPM) post.

Despite his corruption case, Ahmad Zahid has emerged as a strong contender for the job, alongside Umno No. 2 Datuk Seri Mohamad Hasan.

The Umno president has brushed aside pressure to take responsibility for Umno’s losses in the general election and his supporters are now suggesting that he accepts the DPM job which he held from 2015 to 2018.

Strange things are happening every day in Malaysia’s politics and Ahmad Zahid’s bid for the DPM post has to be one of the strangest.

But rumours that he has actually submitted his name for the job are untrue.

His support is most obvious in his home state of Perak where the majority of division heads have credited him for enabling Umno to form the Umno-Pakatan Harapan government.

Only Pasir Salak, Bruas and Padang Renggas did not join in the chorus of support.

“It’s like living in the twilight zone. Just two weeks ago we were fighting Pakatan, now we are in government with them,” said Pasir Salak vice-chief Dr Faizal Tajuddin.

Wangsa Maju division chief Datuk Seri Shafei Abdullah claimed that Ahmad Zahid has the majority support of division chiefs all over the country.

A hastily-convened solidarity gathering at the Riverside Cafe in the WTC complex on Thursday (Nov 24) drew almost 100 division chiefs who did not hold back in their support for Ahmad Zahid.

As Ahmad Zahid, who turned up towards the end of the gathering, was making his speech, those on the floor began calling out for him to accept the DPM post.

“The feeling is that the party president must accept the post,” said Shafei.

The shock of having to team up with the enemy has subsided and Umno politicians are buying into the narrative that Ahmad Zahid saved the party from languishing on the opposition bench.

They also argue that the unity government will not be stable unless the Bagan Datuk MP gets a post.

The Umno rank-and-file dislikes DAP but their distrust of Perikatan Nasional is greater.

They see DAP as the lesser evil compared to Perikatan which they claimed “wants to kill us off” and is more deceitful or “kuat tipu”.

Politicians are such experts at justifying the means to an end.

The other DPM post is likely to go to Datuk Seri Fadillah Yusof of Gabungan Parti Sarawak who was a senior minister in the previous government.

But what will it look like to have one of the DPMs trooping in and out of court?

Will it make Malaysia a laughing stock? Surely it will damage Pakatan’s anti-corruption reputation?

He pointed out that neither the Bar Council nor Bersih, vocal advocates against corruption, had objected to Lim’s appointment.

Lim’s corruption case involving his bungalow was then in progress and was cleared by then attorney general Tan Sri Tommy Thomas soon after.

Another precedent is Datuk Seri Bung Moktar Radin who is Sabah Deputy Chief Minister despite his corruption case.

The more important question is how Prime Minister Datuk Seri Anwar Ibrahim sees the situation. It could set back his administration even before it can take off.

But the thing is that Anwar would not be Prime Minister without Ahmad Zahid’s clout in bringing Umno on board.

The video of the two men greeting each other with a hug when Anwar was sworn in at the Palace showed how chummy and comfortable they were with each other.

It was a moment between “cikgu Anwar” and his “murid Ahmad Zahid” – the master and his student.

Some say Anwar is too shrewd to appoint someone this controversial as his deputy. At the same time, he needs Ahmad Zahid to control Umno or else his government will be on shaky ground.

He could hatch all sorts of mischief like what he did to Tan Sri Muhyiddin Yassin.

Anwar also appreciates how Ahmad Zahid led his coalition towards Pakatan after quelling internal attempts to stay neutral and to support Perikatan.

It is quite incredible that Ahmad Zahid may actually clip his deputy Mat Hasan in this final moment to the finishing line.

“It’s up to the discretion of the Prime Minister. Anwar will want to look at the bigger picture if he wants a stable government,” said Umno supreme council member Datuk Seri Sharkar Shamsudin.