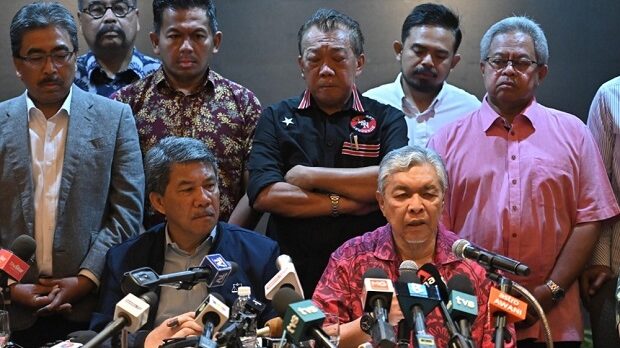 Umno’s top brass has not nominated a candidate for the deputy prime minister position yet, according to a senior Umno leader who spoke to Malaysiakini on condition of anonymity.

“It is up to the prime minister,” said the source.

When asked specifically if Umno president Ahmad Zahid Hamidi, as the highest ranking BN leader, should be nominated to the post, the source remarked: “Ask the PM”.

Prime Minister Anwar Ibrahim is expected to name two deputy prime ministers – one from BN and another from East Malaysia.

Unlike previous deputy prime ministers, the two Anwar will appoint will have several important tasks ahead.

Anwar has a deal with BN in which appointments for cabinet positions, government agencies, Dewan Negara members and government-linked companies have to be mutually agreed upon by the prime minister and deputy prime minister.

This was part of the so-called 10-point agreement between Anwar and BN. This agreement has not been made public but Pakatan Harapan and BN leaders have widely acknowledged its existence.

The deputy prime minister from East Malaysia will also have to be part of the soon-to-be-formed National Administrative Coordination Council on government agencies operating autonomously in Sabah and Sarawak.

The source told Malaysiakini that although the Umno leadership had been briefed about the 10-point agreement, there were no discussions on which BN member should helm those positions.

However, previous reports have speculated that cabinet positions will be distributed equitably based on the number of seats held by each party or coalition participating in the unity government.

A New Straits Time report also suggested that the prime minister and deputy prime minister must mutually decide on the portfolio for finance, home, rural and regional development, education and defence.

On Nov 23, Umno decided that BN should support and join a federal government that is not led by Perikatan Nasional.

The Umno supreme council also unanimously reaffirmed its support for Zahid’s leadership in the party and BN.  mkini

PBRS joins chorus in supporting Zahid to be DPM

Its information chief Freddie Sua opined that Zahid is the best candidate to helm the second-top post as BN is the main partner in the unity government led by newly minted Prime Minister Anwar Ibrahim.

Sua, who is supporting a suggestion made by Umno supreme council member Mohd Razlan Rafii yesterday, said his party is of the opinion that all appointments in Anwar’s government should follow the party’s hierarchy through negotiations.

“This is to enable the formation of a new government.

“As the chairperson of BN and the main partner in the unity government, we believe and have full confidence that Zahid not only qualifies but has extensive experience in governing the country,” he said in a statement yesterday.

Acknowledging Zahid’s pending court cases, Sua said legal cases against politicians are among the challenges that need to be addressed.

He also expressed confidence that the court process will be carried out fairly.

“As long as the court process is not over, Zahid as the Bagan Datuk MP-elect is entitled to be appointed to the position of deputy prime minister according to the hierarchy of positions he holds in BN and Umno.

Sharing the same sentiment was former Selangor menteri besar Mohamad Khir Toyo, who said that the appointment of Zahid as the deputy prime minister could ensure that Umno-BN can achieve a stable solution for the new government as well as the party itself in the long run.

Although the appointment could be seen as a controversial one, Khir said the people can’t deny the fact that Zahid has yet to be convicted by a court.

He said the same could be referred to Muda president Syed Saddiq Syed Abdul Rahman and DAP chairperson Lim Guan Eng as these two leaders are still facing court cases.

For the record, Zahid was acquitted of all 40 graft charges in relation to the foreign visa system.

The Court of Appeal has fixed Jan 10 next year for another case management of the prosecution’s appeal against the decision to acquit Zahid.

Despite this, Zahid is still entering defence against the 47 charges of criminal breach of trust, graft, and money laundering involving funds from his charitable organisation, Yayasan Akalbudi, funds at the Kuala Lumpur High Court.

The trial has since been postponed to January. mkini