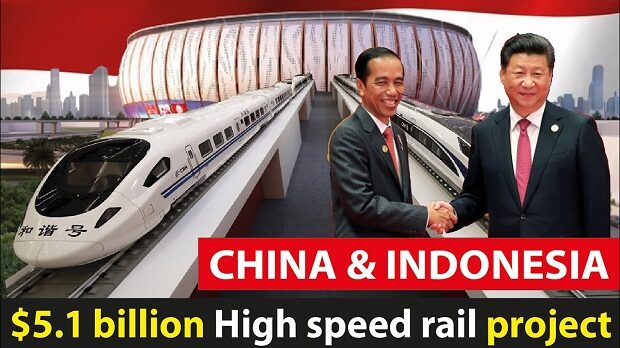 A few days ago a major event took place in Indonesia.  Their Chinese built high speed train made its first test run, witnessed by President Jokowi and President Xi Xinping of China. This was indeed a sort of ‘coming out’ ceremony for China – Indonesia economic relations. Here is the video.

Indonesia is now part of the G20 group of the world’s largest economies.

Then there is also the BRICS. Brazil, Russia,  India, China and South Africa are the founding members of the BRICS countries. Various other nations are applying to join the BRICS including Thailand. Indonesia may possibly join up.

The BRICS countries have over 45% of the world’s population and have a combined GDP of US$29 TRILLION. The USA has a GDP of US$23 TRILLION.

We have plenty to gain (jobs and economic growth) if that High Speed Rail from Kunming to Laos is connected through Thailand, Malaysia and across the Straits of Melaka to Sumatera (and Java).

The world’s economic strength has already shifted to the East.

The world’s military power has also shifted to the East. A couple of weeks back the US and NATO cheered when Russian troops ‘evacuated’ from an area called Kherson in Ukraine.  They said Russia had lost the war in Ukraine.

Then a few days back, the Ukrainians abandoned Kherson and withdrew their soldiers from there.  It was a Russian trap. The Russians had withdrawn from Kherson to facilitate heavy bombardment and air strikes without endangering their own troops.

In the latest news yesterday Ukrainian troops have mutinied and have posted videos saying they will not obey “criminal orders” from their military commanders which sacrifices their lives.  Also yesterday for the first time Ukrainian and Russian negotiators met in Doha, Qatar to discuss a resolution to the Ukraine conflict. Qatar and Saudi Arabia are playing a major role to mediate a peace between Russia and Ukraine.

Again the US and Europe are not in the picture.

Economic and military power has shifted.