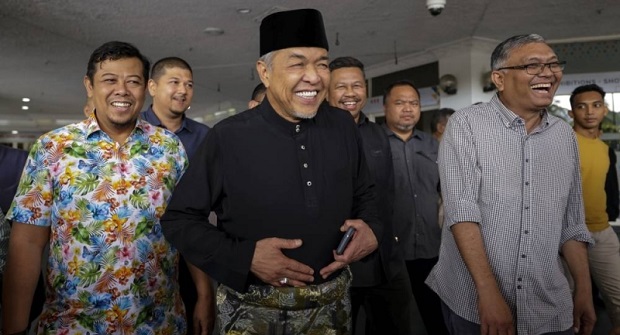 As the Barisan Nasional (BN) chairman wearing an all-black baju Melayu addressed the division leaders, there was almost an atmosphere of celebration at the office of the Malay nationalist party still reeling from the 15th general election.

Shafei urged other division leaders to close ranks and accept the necessity of the party’s choice of new political partners owing to Umno’s dismal performance in GE15.

“After the discussion earlier, we would like to advise division chiefs who are still doubtful, worried, still suspicious, still thinking all kinds of things, please come back and let’s unite the whole of Malaysia.
“This is normal, for us, we are open to Umno uniting because we only won 30 seats, so if we don’t unite then the future will be bleak,” he told reporters during a press conference after the meeting.

Early today, after decades of waiting to hold the nation’s top job, the wait has ended after Istana Negara named Anwar as the next prime minister after days of political impasse.

Anwar is expected to form a coalition government of Pakatan Harapan, BN, Gabungan Parti Sarawak, and others. MM

Shafie told this to reporters after attending a meeting between Umno division chiefs and the party president today.

He also urged division chiefs who have doubted Zahid’s leadership of to “return” so that the party remains united. – Bernama

Over 100 Umno division chiefs today rallied behind party president Ahmad Zahid Hamidi amid calls by MCA, MIC, and PBRS for the BN chairperson to step down.

After holding a special meeting at the World Trade Centre in Kuala Lumpur, the group told reporters that they have vowed to give full support to Zahid and urged him to continue leading the party.

They also lambasted MCA and MIC for what the group regarded as backstabbing Umno after all the Malay-centric party had done to help them.

“I want to express our regret over MCA, MIC, and PBRS’ rudeness by calling for our party president’s resignation from leading BN.

“(They did this) despite all that we had done, carrying them around for many years. They even won Malay-majority seats.

“But when we are in a critical situation, they turn against us,” said Mohd Shafie Abdullah, who acted as the group’s spokesperson.

Shafie, who is Wangsa Maju Umno division chief, said 90 of them had attended the meeting that started at 3pm today, but they were also supported by 40 others who could not attend the gathering.

Umno has a total of 222 divisions across the country.

Pressure to step down

Since BN’s poor performance in the 15th general election on Saturday, the three component parties had made separate calls for Zahid to resign and make way for his deputy Mohamad Hasan to lead BN.

Shafie said the meeting in a resolution also called for other Umno division chiefs who still have doubts about Zahid leadership to come back to support the party president.

“Let all of us (division chiefs), nationwide, reunite.

“We want Umno to be united now more than ever, because we only won 30 seats in the election. If we fail to unite, then we will not have a good future.

“So to all our friends who have turned their back, let’s come together.”

Meanwhile, in a separate event, a group of some 50 people who said they are supporters of Zahid rallied at the party’s headquarters in the afternoon to show solidarity with the Bagan Datuk MP-elect.

In a presser prior to the demonstration, group spokesperson Ramalan Yunus urged party members who are against the Umno president to stop pressuring Zahid.

“The president has to stay as Umno president and BN chairperson.

“Because no party won the election, it means BN did not lose either. So stop calling for Zahid to resign,” he said.

Ramalan also called for the public to respect and support the Agong’s wish to have a unity government formed. MKINI