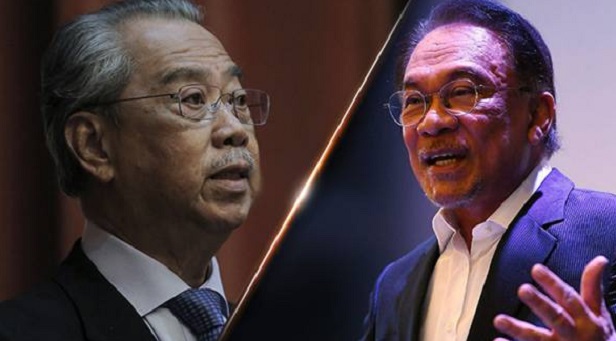 He insisted that he had statutory declarations (SD) from 115 MPs on his side before Tuesday’s royal audience, enough to become prime minister.

He had submitted 114 SDs on Monday, he stated, which was acknowledged as received by the palace, and received another SD the day after.

Muhyiddin said Anwar must now prove that he has a majority by showing how many SDs he has with him.

“At 10.30am on Nov 22, PN’s secretary-general sent another statutory declaration giving me the confidence to be appointed as prime minister, making the number of MPs 115.

“This is more than a simple majority of 112 people needed to allow me to be appointed as prime minister.

“Today, Istana Negara issued a statement that Anwar, who is said to have the support of the majority of Dewan Rakyat members, will be appointed as prime minister

“For the sake of the people’s confidence in Anwar’s legitimacy as prime minister, it is appropriate for him to prove that he has the support of the majority of Dewan Rakyat members,” Muhyiddin said at a press conference this afternoon.

This, he added, was in line with the procedures laid out by outgoing Dewan Rakyat speaker Azhar Azizan Harun – who had on Sunday asked for prime minister candidates to submit SDs to Istana Negara.

He reiterated that he had the support of 115 MPs, with the following breakdown: 73 MPs from Perikatan Nasional, 22 MPs from Gabungan Parti Sarawak (GPS), six from Gabungan Rakyat Sabah (GRS), one from Parti Kesejahteraan Demokratik Masyarakat (KDM), 10 from Barisan Nasional and 2 independent MPs.

“All these documents were sent to Istana Negara at 1.28pm on November 21, which is before the deadline set for parties to send related documents to Istana Negara, as required by the Speaker of the House of Representatives,” Muhyiddin said.

However, GRS stated today that it would accept any decision and advice by the Yang di-Pertuan Agong on the formation of a unity government.

GPS will be joining the unity government that will be led by newly minted Prime Minister Anwar Ibrahim, as per the Yang di-Pertuan Agong’s decree.

“The Agong advised us to form a unity government to overcome the political impasse.

“We obey the constitutional monarchy and the national principles clearly state that we must obey the king, even though we don’t have a king in Sarawak,” he told a press conference today.

“What’s important is they have apologised, it means they acknowledged their mistakes.

“What they mentioned was to open a new chapter. But at the same time, they must respect our component party SUPP.