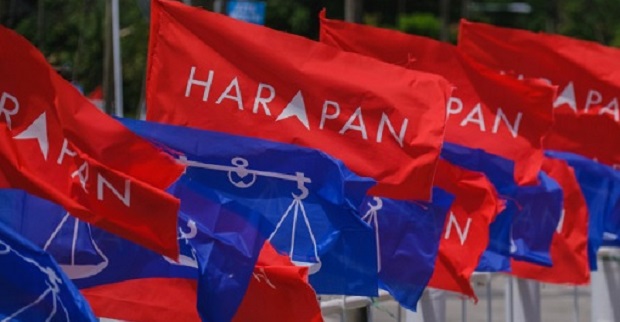 UMNO Supreme Council member Puad Zarkashi has given the clearest indication that the party could work with Pakatan Harapan (PH) to form a unity government.
The former Batu Pahat lawmaker gave a “hint” on Facebook of a possible deal between the two coalitions after the Umno Supreme Council late last night rejected the idea of a Perikatan Nasional-led (PN) unity government.“In the party headquarters, a lot of reporters (after the meeting) asked if it was PH or PN. The answer is simple: PN rejected a unity government.

“The formation of the Perak and Pahang governments is the best ‘clue’. Surely not PN,” he said.

In Perak, PH reached an agreement with Barisan Nasional (BN) to form the state government and allowed Menteri Besar Saarani Mohamad to keep his post, although PH took vastly more seats than BN.

PN claimed the greatest number of seats, but could not achieve a majority.

Talks are also positive about a possible PH-BN government in Pahang. Similarly, PN was again the ‘winner’ but not by a margin of overall majority.

In the early hours of this morning, Umno said it had rejected the idea of joining PN to set up a coalition government, saying it will instead support the king’s proposal for a unity government.

Party secretary-general Ahmad Maslan said the Supreme Council met last night to consider the PN and PH proposals for partnership after the general election failed to yield a clear winner.

Umno won only 26 seats, while its coalition partners won four more to make up a paltry total of 30.

“The Supreme Council unanimously decided to support and uphold the king’s edict for BN to take part in an unity government that isn’t led by PN, to ensure a stable and harmonious government can be formed,” Ahmad said in a statement.

Puad said Umno was very democratic when the decision to reject PN was reached and claimed that the party would soon get on the ground to explain its position to grassroots support.

“MIC and MCA must accept the fact. Let’s go, Malaysians.

The king and other Malay rulers will meet this morning to discuss how to form the next government with parliament in limbo.

The election for one more seat – Padang Serai – was postponed to December 7 after the incumbent died during the campaign period.  TMI

The decree of Yang di-Pertuan Agong on Tuesday for Pakatan Harapan and Perikatan Nasional to form a unity government and yesterday for BN to join a unity government for the sake of the nation and the rakyat is dignified, noble, and extremely interesting as it could be the best way forward in the political deadlock the nation is currently experiencing.

In addition, the Yang di-Pertuan Agong also decreed that BN’s 30 elected MPs should be part of the new government. Being part of a unity government does not mean that parties need to sell out on their principles and policies. Instead, they can agree on a joint manifesto to incorporate as broad of their manifesto promises as possible.

This allows the parties to maintain their principles and policies, as well as to ensure that voters do not feel that they have been cheated. The formation of a government that is inclusive of different parties and coalitions can be viewed as a loose coalition or grand coalition, which can be described as a “post-election coalition”.

At a more mundane level, a unity government, comprising the two largest political parties alongside smaller parties, many with contrasting ideologies, is also formed when no single bloc gained a sufficient majority to form a government. Continental Europe provides ample contemporary examples of where these grand coalitions are formed.

Malaysia is a poignant example here. To form a unity government, Article 43(2)(a) of the Federal Constitution on the prime minister’s appointment must be the first order of business. Before the introduction of the new Article 49A on Anti-Hopping Law, political parties were not considered relevant in the appointment of the prime minister since Article 43(2)(a) implied a “government of MPs”.

With the introduction of the amended Article 10 on restrictions on MPs to party hop, Article 49A on Anti Hopping Law and the introduction of the term “political party” under Article 160, the Federal Constitution now explicitly recognises political parties as constitutional actors in the appointment of the prime minister and formation of a government.

Well, this is where the law stands regarding the formation of a government after a general election. Let’s go deeper into the understanding of the decree of Yang di-Pertuan Agong on the unity government, and the other variants available out there.

Option A: Grand coalition government or a unity government

Currently, as it stands, there are four main blocs which are Harapan, PN, BN, and the East Malaysian bloc Gabungan Parti Sarawak (GPS) and Gabungan Rakyat Sabah (GRS). If three to four of these main blocs decide to form a coalition, this would be a grand coalition government (unity government).

However, there are potential risks to forming a unity government without an effective post-election coalition agreement. The agreement between parties should be made public for transparency and accountability.

Option B: Strong majority government with a responsible opposition

A sizeable minority of MPs remain in opposition in a fully functional Parliament and sit in a shadow cabinet while others form a coalition government with a strong majority. It is a watered-down version of political unity/inclusive arrangement from the grand coalition government, overcoming its disadvantages.

1) Parties that cannot work together don’t have to be in the same team, possible for a better working relationship between the government and opposition bloc;

2) Government can be more compact and competent, while opposition MPs can take up parliamentary committee positions, with committee chairs and deputy chairs paid extra allowance;

3) Check and balance are preserved through Parliament.

Option C: Weak majority/minority government, buffered up with CSA signed with the opposition

A strong minority or even majority of MPs stays as opposition but the government with a weak majority or minority of seats is preserved through a Confidence and Supply Agreement (CSA) with some opposition blocs.

It’s a watered-down model of Option B – ‘Strong majority government with a responsible opposition’ – but with greater freedom for some parties who want to stay out of the government but are still committed to its survival under pre-agreed conditions.

1) Some parties can support the government without diluting its identity and distinction;

2) Government can be “slimmer” as the CSA allows opposition MPs from the largest opposition bloc to take up positions in the shadow cabinet or parliamentary committees;

3) Check and balance will be stronger as government bills and motions can be easily defeated as long as such defeat doesn’t threaten the government’s survival.

In all three models, smaller parties are accommodated, but as we move from a unity government to a minority government buffered up with a CSA, we will gain an increased coherence within government, greater check and balance and retention of identity for parties who want to stay out of government.

It is now up to political parties to put aside their personal agendas and differences in order to put the rakyat first so that as a nation we can achieve cooperation between race, religion, and region as a sign of respect to the Yang di-Pertuan Agong’s decrees.

The Yang di-Pertuan Agong has come up with a dignified way forward in addressing the hung parliament, which is a unity government, and gratitude is in order to the Yang di-Pertuan Agong for this solution which puts the rakyat first and encourages cooperation between races, religion, and region. WRITER – AZALINA OTHMAN SAID is elected Pengerang MP – MKINI