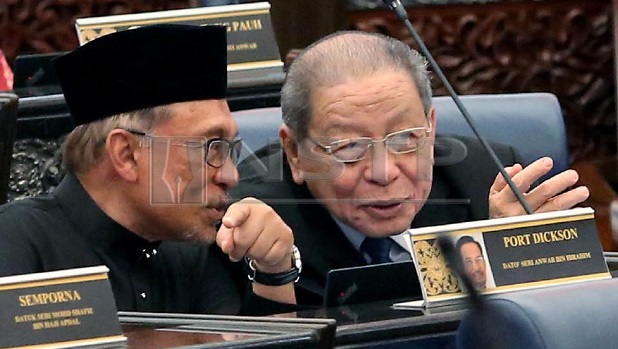 Malaysia needs a new leader who can lead the country to punch beyond its weight in world affairs but not for the wrong reason as when we became “kleptocracy at its worst” recently.

Malaysia has fallen from its expectations on the formation of Malaysia to be a first-rate great world-class nation and has become a second-rate mediocre country after six decades and in danger of becoming a third-rate failed, divided and kleptocratic state on Malaysia Centennial in another four decades.

Malaysia needs a new leader who can lead the country to punch beyond its weight in world affairs but not for the wrong reason, as when we became “kleptocracy at its worst” recently.

Leaders who had been associated with Malaysia’s decline from a first-rate great world-class nation to a second-rate mediocre country for one or two decades should yield place to a new leader with a new vision and commitment to make Malaysia great again.

This is why Anwar Ibrahim is better than others to be the 10th Prime Minister of Malaysia, for the 15th General Election has proved to be the most important and critical general election in Malaysian history as it was the watershed to determine whether Malaysia can become great again in various fields of human endeavour or is to continue in national decline.

Apart from heading the biggest political coalition with the most Members of Parliament elected and winning the biggest electorate with 5.8 million votes, Anwar Ibrahim has the vision and commitment for Malaysia, ranked No. 45 for countries in population size, to once again to punch beyond its weight in world affairs. (Media statement by DAP veteran Lim Kit Siang in Penang on Thursday, 24th November 2020)

Expect any PM to struggle

Malaysia likely gets a prime minister before the week ends. Whoever that PM — red or dark blue — would he lead the country upwards?

So much time and effort is spent around the choice of PM that the question whether either choice overcomes the nation’s present obstacles — and the coming storm in 2023 — goes unanswered.

Alert: Not a lot of good news below.

Anwar Ibrahim is as populist as they come. He built his career from promise rather than delivery, all that way from the “paved with good intentions” deal with Mahathir Mohamad in 1982 which announced his entry to national power.

Muhyiddin Yassin is no less populist with a high aversion for hard decisions — his pandemic administration was survival, not revival.
One of the two must muster the courage to lead and be unpopular if needs be. This column is convinced both are bereft of courage. For the nation’s sake, hope they find it when in power.

Why would both struggle immediately from swearing-in? Here’s why.

DAP is probably the first Cabinet casualty. The dark blue surge — Perikatan Nasional’s total domination of the Muslim-belt — with six state elections due in eight months and Anwar’s personal desire to court Muslim votes above all would lead to strategically limiting DAP’s representatives, not in numbers but in significance.

The “Rocket folks” input is welcome but needs to be muted in plain sight in order to avoid a repeat of the Mahathir administration’s Lim Guan Eng Finance Ministry fiasco.

To be truthful, Lim did not do much wrong to the Malaysian economy but him and his boys were a PR train wreck. They contributed massively to Muslim animosity towards DAP in government.

Anwar, former Asia’s best finance minister — with the chartered accountant party deputy president — would fancy his chances to quickly fix the country. But how?

What he would be happy to do is to outline how an unprecedented effort to fight corruption — activate the cavalry charge bugle and imagine a rampaging Rafizi Ramli decked with righteousness badges storm down to Putrajaya on a horse — leads to wonderful savings.

That would be it. The plan to fund further expenditures through savings when corruption is nipped, shipped to Jupiter.

Further, this administration would depend on favourable global situations and expect commodity prices to abide by our expectations. It would not drive an economic reform agenda. It’ll prefer solutions without pain.

Yet all long-term gains rely on short-term pain. Anwar was finance minister 30 years ago when Asia and its tigers roared. This is a different Malaysia. Reform is long overdue.

Anwar has a predilection to sell easy solutions and bolster his credentials by pointing to his opponents’ inadequacies.

Yet, there will be positives.

His ministers are likely more positive and willing to engage civil society, and the legislature inclined to progressive law-making — on civil rights, access and transparency.

2018-2020 tribulations however revolve around civil servants, not the politicians.

The service does not love Pakatan. Radzi Jidin’s upset win in Putrajaya echoes PN’s recent ascension as the preferred brand.

Either enough ministers with their officers find the skills to override administration blocks or Anwar offers visionary leadership which captures the imagination of the nation, in which case civil servants are forced to back down in the face of his inspiration.

The way both campaigned the last month, this column remains severely unconvinced.

The economic management challenges might end up overwhelming him.

Second bite of the cherry as Abah returns. Civil servants would be delighted but their delight is based on Muhyiddin not rocking the boat.

Almost a decade as Johor mentri besar bequeaths him the skills to stay relevant to voters even if the country remains lukewarm.

“Daddy cares” would be the tone but what if cost of living overwhelms the rakyat?

PN’s senior partner PAS would ask for its pound of flesh. It might care less for the finance, transport, international trade and foreign portfolios, and keep its eye on embedding its ideology into the nation’s vein through the education, health, rural development and Federal Territories — keep an eye on city liberals — portfolios.

The PN pandemic administration (2020-21) was never under scrutiny and solely undone by Zahid Hamidi. During its short stint, it was measured by hospital admissions and death figures as the rakyat stayed home to kill off a virus. Therefore, it retains misplaced romanticism as regular measurements were deemed unnecessary then.

This time, Muhyiddin must lead.

PAS weighs him down with community focus rather than economic progress, and he cannot resist. If PN fails to build on the dark blue wave at the 2023 state elections, blame might be directed at him.

Kedah, Kelantan and Terengganu a formality to win at this rate. Penang stays red but after inroads in north Seberang Perai ,winning those state seats puts a marker for future races.

Selangor is the crown jewel, and PN’s domination of the state’s north with incursions to the west (Klang) emboldens a proper assault. Cue to up the ante on racial rhetoric.

Which means the Malay first discourse as carved out by Muhyiddin risks taking a life of its own with no brakes.

Malaysians will never feel more divided than in the eight months to come.

The upward trajectory of youth unemployment or under-employment — Muslim graduates riding bikes to get food to middle class red homes — will raise the sense of abandon and redirect the angst using the identity politics platform encouraged for them.

Possibly all about an administration bent on sustaining good feels and blaming their opponents out of power for the disarray in government.

A PM by any other name

So, after the celebrations die down, the troubles come to the surface.

The larger problem, our electorate expects uncertainties and worries to end with a PM named.

Malaysians feel success is always one decision away even when the world becomes increasingly complex.

With six prime ministers in the first 60 odd years, a skewed opinion of PMs equal stability and progress has been falsely embellished in our collective consciousness.

The past five years with five PMs — including the incoming one — ought to challenge that belief. Unfortunately, it takes time for the people to realise it.

They still have not. People as they do always yearn for a better past as they remember or retold to them by their elders.

People might get visibly aggrieved if informed the next five years might see more PMs, one or two more.

A PM is not automatically the solution but he can be the start. If he starts. He might just want to stay as long as possible rather than lead Malaysia forward.

This is when Malaysia needs to start worrying. MALAY MAIL