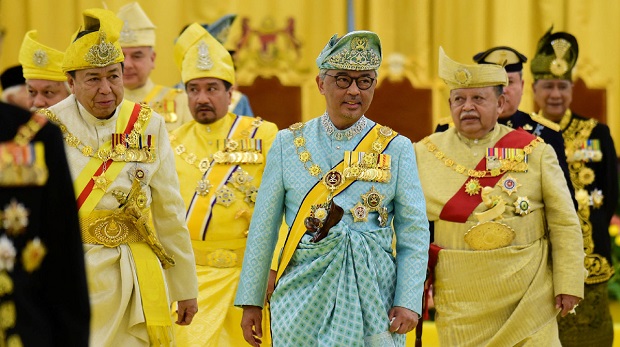 ‘It will sleep with anybody but it wants the best deal.’

Quigonbond: I knew it. Umno will sleep with anybody but it wants the best deal. Why not go for PMship when Pakatan Harapan can only offer it the DPM’s post?

It is possible that Perikatan Nasional (PN) is desperate enough to keep Harapan from forming government that they are willing to surrender the PMship to Umno, a deal which also allows them to remain in government.

I would just say this. If BN joins PN, parties like MCA, MIC and GPS are traitors to the people they purport to protect and represent. It will not be forgotten.

Scarecrow: “The (Umno) supreme council unanimously supports and respects the decree of Yang di-Pertuan Agong for BN to support and take part in a unity government that is not led by PN, to ensure the establishment of a stable and prosperous government.”

Umno secretary-general Ahmad Maslan is a great storyteller playing the guessing game very well to give the Harapan supporting listeners some hope, as the story is about to end soon when in all possibilities PN would back a BN-led BN-PN government.

From the PN perspective, this is much better that a Harapan-led Harapan-BN government. Another possibility is a BN-led BN-Harapan government.

Harapan supporters must thank Ahmad Maslan for his storytelling skill – at least his story now has ruled out Muhyiddin Yassin and Abdul Hadi Awang as prime minister to the great relief of Harapan’s Chinese and Christian supporters.

But the story has so far not ruled out the possibility of Umno deputy president Mohamad Hasan from becoming PM because he is seen as very acceptable by all parties including Bersatu, PAS, GPS, PKR and DAP.

That’s why yesterday Mohamad Hasan was apparently summoned by His Majesty Agong to have a face-to-face meeting on a one-to-one basis.

So Harapan supporters should be prepared for another upset just like Japan created an upset by beating almighty Germany 2-1 at the World Cup.

Unluckeee: The wording of the Umno supreme council’s statement is ambiguous. It could mean BN leading a coalition with PN and GPS. Or it could mean BN supporting Harapan.

How do we know if PN has not offered former prime minister Ismail Sabri Yaakob to continue leading? (Just so that all of them keep Harapan from power?)

I have this niggly feeling that Harapan leader Anwar Ibrahim and all the right-thinking people will be disappointed again. I hope that I am wrong.

OMG!: This is a devious statement by crooked minds. They want to pressure PN to let Umno lead (the prime minister is from Umno).

They want the Malay masses to feel that, whatever happens, it was the Agong that made the final choice, not Umno.

Cunning and clever. But it shows the lack of courage and the slippery nature of these men.

OrangTua: BN has no mercy for people. Since the election, we have been suffering from days of stress, worry, anxiety, sleepless nights, and endless scanning of headlines.

And all they can come up with is an ambiguously-worded statement. That’s their decision after a five-hour-long meeting.

BlueShark1548: Malay dominant parties still want to prevent Anwar from being PM even though Harapan won the most seats in Parliament.

Anwar is now in a fix. Anwar cannot refuse to join a unity government where he is not PM if PN is to accept an Umno leader as PM.

As for the Borneo bloc, it would have no issue. Perhaps a possible checkmate for Anwar or a positive outcome if PN maintains its stand of not working with Anwar and DAP?

IndigoOrca3175: I agreed. However, have faith in our Agong for a wise decision. The deputy Agong is known to be a ‘no nonsense’ sultan.

I hope the Perak arrangement would be replicated at the federal level in the formation of a new government.

Sentinel: Smart statement. They have held onto the aspiration of the Agong come what may. A unity government means all will have to be in it. Harapan and BN have had to eat humble pie.

Will PN and the Borneo bloc be able to do the same? Remember, the Agong wants everyone in it. So, everyone gets a little something and no one takes everything. Everyone will be upset with what little they have but are content that this is the only way out.

We have peered into the abyss and we need some deep thinking and action on building bridges among everyone.

The national agenda has to be about solving economic issues and bridging the national divide across various groups. Ideologies will continue to hold fast amongst the constituencies but bridges of understanding have to be built even if they may disagree.

This is going to be a messy process but the optimist in me believes that PN will capitulate and join.

Kulaptabing: I woke up at 4:30am, and after reading Ahmad Maslan’s statement and tears started to fall from my eyes.

But we never know how this will end. PN will not just bow out and go. Anyhow, without hope, there will only be misery.

PinkFalcon7327: Remember, it is not over until the fat lady sings. PAS might leave Bersatu to form a unity government with BN and gets to be PM with BN as DPM.

I won’t be happy not until our beloved Agong name the PM.

Mk Follower: Anwar should be the best candidate to be our 10th PM. Looking back at the past 24 years of Anwar’s sacrifices, his strong unwavering commitment, and his serious conviction in fighting to form a more inclusive Malaysia, it was beyond any doubt that he should have our trust to lead us to a new and brighter Malaysia.

Above all, his resumes at all fronts within the country and internationally also make him the most respected, most qualified candidate, second to none at this critical juncture to be our 10th PM.

Beman: It looks like Umno wants to return to the pre-GE15 setup. Well, whether they can have it or not depends on PN. If PN said yes, the spineless Borneo bloc will say yes too.

Then there will be a fight between the poster boy of BN (Ismail Sabri) and the Monsoon Man (Ahmad Zahid Hamidi) for PM.

More popcorn, anyone? Brace for continued instability if it is back to pre-GE15.