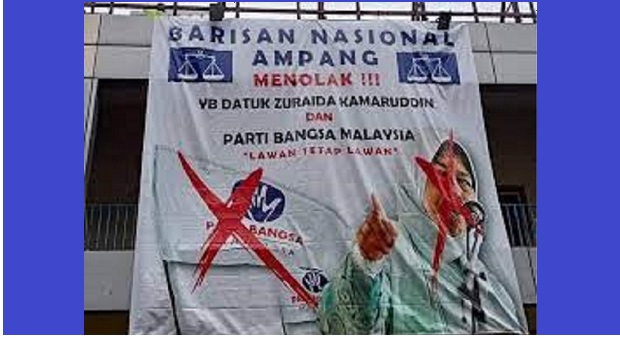 As nomination day for the 15th general election inches closer, BN is seeing a struggle between Umno and MCA over the Ampang parliamentary seat in Selangor.

This comes amid pushback from the local Umno chapter following strong indications that the BN leadership wants to field an MCA candidate for the Malay-majority seat.

Malaysiakini learned that the Ampang Umno division had sent a representative to discuss the matter with party president Ahmad Zahid Hamidi last night, and plans to have another meeting with him later this evening.

When contacted, its acting division chief Mohamad Nadzim Ibrahim confirmed that they are seeking for the party leadership to consider fielding an Umno candidate in Ampang.

“We want the candidate to be from Umno, if possible. The first reason is because of the Ampang demographic.

“Secondly, we have worked in Ampang since 2018, and MCA here does not represent the Chinese in Ampang.

“These are the three main factors. They have never done any work for Ampang BN. It was us, Umno, who had been helping the Chinese community in Ampang, they are more comfortable with us,” he told Malaysiakini.

Ampang is a parliamentary seat that was created in 2004, a cutout of what was previously known as the Ampang Jaya constituency.

Since the Ampang Jaya seat was first created in 1986, it had been contested and won by MCA in four general elections. In 2004, Umno fielded its candidate in Ampang and won.

However, in 2008, Zuraida Kamaruddin wrestled the seat as PKR’s candidate by defeating Umno’s Azman Wahid. Zuraida retained the seat in the 2013 and 2018 general elections when she defeated Umno’s Rozaidah Talib and MCA’s Leong Kim Soon, respectively.

In 2018, the constituents were made up of 56 percent Malay voters, 35 percent Chinese voters, nine percent Indian voters and one percent other ethnicities.

When asked about BN’s chance in Ampang this time around, Nadzim said they believe there is a higher chance for the coalition given an expected multi-cornered fight for the seat.

According to the Umno leader, they predict a six or seven-cornered contest in Ampang, which would also see the incumbent MP facing her former party PKR.

“God willing, we have a chance because there will be a six or seven-cornered fight here. And we believe that Umno and BN stock voters will remain with us.

“So, if the remaining number of voters splits six or seven ways, we may have a slight advantage. This is provided that all BN families here go out to vote on polling day,” he added.

In 2020, Zuraida, who was then a PKR vice-president, left the party together with 10 other PKR MPs before joining Bersatu.

She recently left Bersatu and joined Parti Bangsa Malaysia (PBM), a newly created political party, where she is engaged in a leadership tussle with founding president Larry Sng.

Zuraida is expected to face Batu Tiga assemblyperson Rodziah Ismail, who is PKR coordinator for the Ampang constituency, among others, for GE15 on Nov 19.