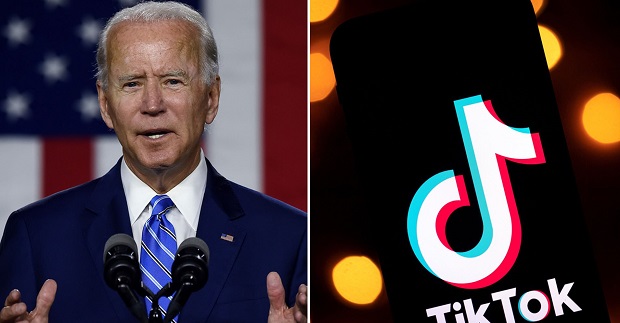 Instead of generating its own TikTok content, the White House has targeted creators on the platform who then post their own videos.

Two weeks out from the Nov 8 midterms, President Joe Biden sat for an interview – not with a broadcast news anchor or major newspaper, but a panel of six young activists organised by NowThis News.

As the conversation aired on the network’s YouTube channel that night, the count of live viewers hovered at about 6,000.

But the live coverage wasn’t the point.

The interview was intended as a back door for the White House into one of the fastest-growing social media platforms for politics and news, one the White House can’t access directly itself: TikTok Inc.

The rapidly expanding video-sharing platform has become increasingly pivotal to reaching young voters, particularly as legacy social media networks like Facebook and Twitter publicly falter. But TikTok’s aggressive harvesting of user data – and suspicions of its Chinese parent company ByteDance Ltd – have fuelled bipartisan alarm about the amount of information on US users that may be funnelled to Beijing.

By having the president appear on NowThis, the White House could be certain that clips from the event would be posted to the channel’s millions of TikTok followers, amplifying the appearance many times over without putting the president directly on the social media platform.

The engagement betrays a simple calculation within the West Wing: TikTok is too important to ignore.

One in 10 Americans and more than a quarter of adults between the ages of 18 and 29 say they “regularly get news from TikTok” according to a recent survey from the Pew Research Center.

More importantly, TikTok and Instagram – which has adopted some of TikTok’s most popular features – are the only two major social networks with increasing levels of news consumption. Users of Twitter Inc, Facebook, LinkedIn Corp, and Reddit Inc all report consuming less news through those services over the past two years.

“The reality is that there’s a significant amount of people who are getting their news there – we can’t unilaterally disarm,” said Rob Flaherty, the White House’s director of digital strategy. “So it’s important to make sure that we’re engaging there.”

But that can be difficult when your interactions with the platform are handcuffed amid a multi-year national security review.

The White House is among a slew of federal entities — including the State Department, Department of Homeland Security, Department of Defense, and Transportation Security Administration — that do not allow TikTok to be installed on government-issued devices.

Biden administration officials are attempting to broker an agreement with TikTok that would allow the video-sharing site to keep operating in the US by enacting additional restrictions on how US user data is stored, according to people familiar with the discussions who requested not to be identified discussing a national security matter. But the effort has stalled over concerns the app would still remain a threat, and Congress is weighing legislation that would officially ban TikTok from all government phones.

Spokespeople for TikTok didn’t respond to a request for comment.

For now, there’s no official White House account on the social media network, and Biden’s digital strategy team has no relationship with the content team at TikTok in the way it does with other leading social media sites. To monitor emerging trends on the platform, Flaherty occasionally uses an old, personal iPod Touch device that can access the service without putting White House data at risk.

Instead of generating its own TikTok content, the White House has targeted creators on the platform who then post their own videos.

“We have to focus on reaching people where they are, so we built out a digital partnerships team that makes us the first White House to have dedicated staff for digital creators,” Flaherty said. “Some of them focus on political creators – folks who primarily make political content. Others focus on what we call ‘audience creators’ – people who have reach into target audiences that we need to talk to.”

Engagement has typically occurred around big policy rollouts but can also be driven by breaking news or trending interest.

When the White House saw a large number of TikTok influencers posting about Russia’s invasion of Ukraine in March, it brought creators to the White House for a briefing from National Security Council officials and then-Press Secretary Jen Psaki.

In the hours before Biden announced his student debt relief plan in August, he briefed about 80 digital creators on the plan via a Zoom call. Details of the program – which offers Americans as much as US$20,000 (RM94,450) in cancelled loans – were posted first to social media networks.

Pop singer Olivia Rodrigo filmed a TikTok with Maisy Biden, the president’s granddaughter, before the 2020 election urging her followers to vote – a post that garnered 18.5 million views. Months later, Biden hosted Rodrigo at the White House, where she filmed a series of videos with the president about the administration’s vaccination campaign.

And earlier this week, Biden invited a group of eight TikTok creators to the White House for an event where he received his updated coronavirus booster. The visit also included an hour-long meeting in the Oval Office where he spoke about his family and urged them to get vaccinated as well, the Washington Post reported.

“The key to quote-unquote winning TikTok in the political space isn’t about your own content as much as it’s about how you are getting your message out through creators,” Flaherty said. “And that means you have to take them seriously and give them the information they need to help inform their own audiences in authentic ways.”

But not every effort to engage with TikTok is that serious. For the White House, simply being a character on the platform can pay dividends; winking references to trends or popular figures are a chance to engage casual audiences in the way a late-night television appearance previously might have.

Last December, the Jonas Brothers and the president recreated a version of the viral “Joe Byron” TikTok video at the White House. (For the uninitiated, the original video featured brief interviews with some of Coney Island’s most eccentric residents – including a shirtless man who asked the president to take him to dinner.)

Biden’s version of the clip racked up more than 50 million views in the first 24 hours.

A sketch featuring Psaki and comedian Benito Skinner pretending to be a White House intern racked up 7.2 million TikTok views.

And during the Detroit Auto Show in September, Biden filmed a clip with Daniel Mac, a TikTok influencer who gained his following by asking the owners of exotic cars their occupations.

Still, there can be some risk in navigating an emerging digital space – beyond the security concerns that hang broadly over TikTok.

Just two weeks after Biden and Mac’s video post, Apple Inc announced Tony Blevins, a senior executive that had been at the iPhone manufacturer for 22 years, was departing the company. Blevins’ departure came after his team was removed from his command following a crude joke he made in a TikTok video with Mac.

And TikTok’s algorithmic-driven virality means it can often be tough to anticipate what might take off on the platform. When Biden sought to promote his pandemic relief measure, the American Rescue Plan, during a speech last year at the White House, he adopted his trademark stage whisper.

“Guess what?” Biden said. “It grows the economy. Benefits everybody. Hurts nobody.”

The audio exploded on TikTok, appearing in over 15,000 videos created by a legion of Gen Z users to show off ridiculous pandemic purchases – from barbells painted to look like doughnuts to a Garfield-themed spice set.