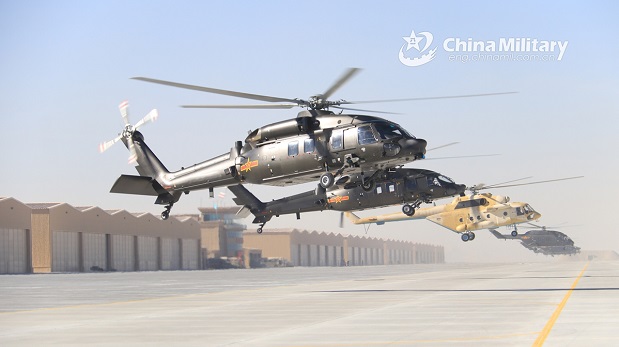 Pilots assigned to an army aviation brigade under the PLA 76th Group Army maintain their helicopters in nearly motionless flight over a reference point at an ultra-low altitude before lifting off for a flight training exercise on January 5, 2022.Photo:China Military

China’s domestically developed Z-20 utility helicopter has surpassed the US’ Black Hawk, as it has adopted many advanced technologies the Black Hawk does not have, said the chief designer of the Chinese chopper on state broadcaster China Central Television (CCTV).

Deng Jinghui made the remarks when he was asked on a CCTV program on Saturday if the Z-20 has copied or drawn inspiration from the Black Hawk, given the similarity in appearance between the two helicopters.

The Z-20 is a fourth-generation helicopter that has many technologies the Black Hawk does not have, including a fly-by-wire flight control system, which is a typical characteristic to make a helicopter ranking among the fourth generation, Deng said.

China had no reference when it developed the fly-by-wire flight control system on its own – even now the Black Hawk with fly-by-wire upgrades has not entered service, the chief designer said.

The Black Hawk is not equipped with active control systems of noise and vibration like the Z-20 does either, he said.

Chen Guang, vice general manager of AVICOPTER, the helicopter branch of the state-owned Aviation Industry Corporation of China (AVIC), told the Global Times in a previous interview that the Z-20, including its powerful engine that can support high-altitude operations, is entirely developed and  built by China.

Many technological innovations were applied to the Z-20, and the active vibration control, fly-by-wire, low-noise rotor design and high-performance rotor aerodynamic design are considered advanced in the world, the Global Times learned from the helicopter’s makers.

As a type of utility helicopter, the Z-20 is expected to spawn many variants and enter service in different military arms and branches in large numbers just like the Black Hawk, a Chinese military expert who requested anonymity told the Global Times on Sunday.

According to official media reports, after the Z-20 made its debut at the National Day military parade on October 1, 2019 in Beijing, helicopters of this type have already entered service with the PLA Army, Navy, Air Force and the Chinese People’s Armed Police Force.