Sabotage!! – This Ex-Defence Minister Believes The U.S. Blew Up Both Nord Stream Pipelines

Seismic stations in Sweden, Norway and Finland registered two explosions on Monday (Sept 26). One of the explosions registered a magnitude of 2.3. Seismologists immediately knew it was not an earthquake, but undersea detonations. It was followed by a series of unusual leaks on two natural gas pipelines running from Russia under the Baltic Sea to Germany.

The steel pipe itself has a wall of 4.1 cm (1.6 inches) and is coated with steel-reinforced concrete up to 11cm thick. Each section of the pipe weighs 11 tonnes, which goes to 24-25 tonnes after the concrete is applied. The undersea pipelines are designed in such a way that they are not accidentally damaged and leaks are rare. It was deliberately blown up with explosive devices.

The pipelines – Nord Stream 1 and Nord Stream 2 – were not in operation, but both still contained gas under pressure. Subsequently, German geological research centre GFZ said the pipelines underwent dramatic falls in pressure. A Danish military flight over the leaks took photographs, including one showing an area of bubbling gas a kilometre wide on the sea’s surface.

The damage is so serious that the Nord Stream pipelines are unlikely to be able to carry any gas to Europe this winter – even if the Ukraine War suddenly ends and Russia and European Union hug each other again. The Danish and Swedish maritime authorities have issued navigation warnings, prohibiting ships from going near the leaks. It was a terrorist attack. 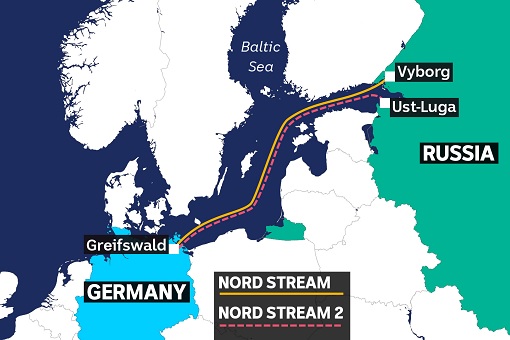 European Commission president Ursula Von der Leyen screamed that the leaks were due to “sabotage”, and threatened the “strongest possible response”. Danish Prime Minister Mette Frederiksen described them as “deliberate acts”. Polish Prime Minister Mateusz Morawiecki said the leaks were an act of sabotage that “probably marks the next step of escalation of the situation in Ukraine”.

U.S. secretary of state Antony Blinken said – “The United States remains united with our allies and partners in our commitment to promoting European energy security”. Of course, Ukraine’s presidential adviser Mikhaylo Podolyak said the leak was “nothing more than a terrorist attack planned by Russia and an act of aggression towards the EU”.

While there has been no official evidence so far to suggest what caused the Nord Stream problems, but with distrust of Russia running high as a result of the Ukraine invasion, all fingers are pointed at Russia. Some argue that Vladimir Putin sabotaged his country’s own infrastructure out of spite or to warn that pipelines are vulnerable to attack. Is it so straight forward?

Kremlin spokesperson Dmitry Peskov said he was “extremely concerned” about the leaks, adding that the possibility of a deliberate attack could not be ruled out. Exactly why Putin decided to blow up both pipelines, if indeed Russia was the culprit behind the terrorist attack, as the Western powers and most news media would like the world to believe?

Vladimir Putin is not North Korean Kim Jong-un. The Russian president had taken years strategizing all the moves and counter-moves before launching the so-called “special military operation” in Ukraine on February 24 this year. Every single calculated move has been analysed and well thought, including the solution to counter the West’s economic and financial sanctions.

The Nord Stream 1 pipeline between Russia and Germany is 51% owned by St Petersburg-headquartered Gazprom, while Nord Stream 2 is owned by a Swiss subsidiary of the same company. So, what’s the point of destroying Russia’s own pipeline? Even a dictator as dumb as Kim Jong-un would not do such a thing, what more a former KGB agent like Putin.

Some Western media have cooked up a half-baked excuse – European gas prices have been dropping, but after news of the suspected attack, they skyrocketed by 20% and the British gas price shot up 33%. But hadn’t Putin showed that there was a simpler way to push up the price of European gas? By turning off the oil tap, Russia could easily push up the price of oil and gas.

Gazprom, which had cut gas flows to just 40% in July, has further cut it to just 20% in an effort to punish Germany – the E.U. biggest economy – for imposing sanctions on Russia. Nord Stream 1 effectively stopped pumping gas to Europe “indefinitely” from August 31 after maintenance work, reducing the pipeline’s capacity to 0%. Putin said Russia will not resume gas supplies to Europe until sanctions are lifted.

Meaning Putin’s game plan was to blackmail  Europe to end the sanctions, betting the EU would eventually blink as the coming winter could trigger peoples’ uprising. And there are signs that the plan is working. High energy prices and mounting costs of living have fueled civil unrest across Europe over the winter, including street protests and strikes.

Social unrest has already begun in the Czech Republic, where more than 70,000 protesters took to the street in capital Prague. They demanded the ruling government take a neutral stance on the Ukraine war to ensure energy supplies from Russia are not disrupted ahead of the coming brutal winter. Protesters were outraged with soaring electricity bills and escalating cost of living.

Some Czech demonstrators wore T-shirts praising Putin, while others carried banners voicing anti-EU and anti-NATO sentiment. Despite being one of the strongest supporters of Ukraine, the Czech saw its inflation skyrocketed to 18% – among the highest in Europe – and an influx of 400,000 Ukrainian refugees since Russia invaded Ukraine. They now scream “Czech Republic First”. 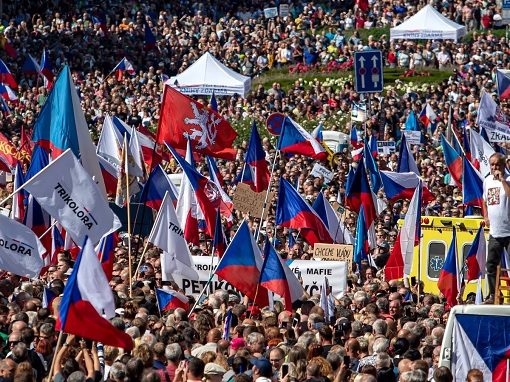 Egoistic and clueless European politicians who refused to admit their mistake in starting sanctions they can’t win against Russia have scrambled to introduce emergency measures to prevent more social unrest due to high energy costs and inflation. Germany, Sweden, Finland and the Czech Republic have announced some plans aimed to ease the burdens of the current energy crisis.

Germany, which saw police clashed with protesters, has unveiled a US$65 billion relief package, while Sweden offered about US$23 billion in liquidity guarantees to help energy companies purchase supplies, without which some electricity providers risked going into “technical bankruptcy”. France has so far spent US$26 billion to keep power bills affordable.

Surveys by YouGov showed people in France, Germany, Poland and the United Kingdom have low trust in their governments’ ability to handle the energy crisis. The government of Italy had collapsed, leading to the emergence of far-right leader Giorgia Meloni as the country’s first female prime minister – Italy’s most right-wing government since World War 2.

British new prime minister, Liz Truss, too, is struggling with the energy crisis. But before she could fix the energy problem, the British new government has already screwed up its currency after deciding to impose sweeping tax cuts, which are to be paid for by higher government borrowing. The pound plunged as low as US$1.0373 – the lowest since the decimalization of the currency in 1971.

So, there is no reason for Russia to blow up Nord Stream 1 and 2 simply because the EU cannot live without Russian gas. Lecturing EU elite politicians that sanctions have caused inflation and economic crisis, Hungarian Prime Minister Viktor Orban has called for lifting of EU sanctions on Russia by the end of this year. Instead of punishing Russia, it makes huge profits instead.

Besides, even if Putin wanted to attack gas pipelines, would it not be more logical to sabotage a new gas pipeline between Norway and Poland which was inaugurated on Tuesday (Sept 27)? It doesn’t make sense to sabotage Nord Stream 1, which has already stopped pumping has to Europe, instead of the new 850-kilometre Baltic Pipe which is opened to cut Russia gas dependency.

Baltic Pipe, which opened one day after the attack, connects Poland to Denmark mainland and then to Norway and allows Poland to consume Norway’s natural gas, as well as to allow Sweden and Denmark to buy natural gas from Poland – directly competing with Russian gas. As the most hated dictator in the region, Putin would not have any problem sending mercenaries to destroy the Baltic Pipe.

And it certainly hilarious to point finger at Russia for allegedly sabotaged the newer pipeline Nord Stream 2, which has never officially opened as Germany refused to certify it for commercial operations due to Russia’s invasion of Ukraine. If Putin had wanted to blow up the pipelines from the beginning, he didn’t need to waste time threatening to shut down gas supplies. 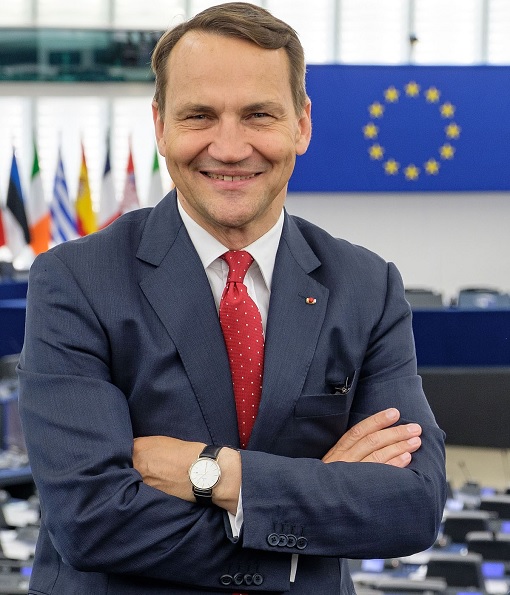 Currently an elected member of the European parliament, Sikorski is pointing his finger at the United States as the culprit behind the sabotage of Nord Stream 1 and 2. On Feb 7, President Joe Biden promised to prevent Nord Stream 2 from becoming operational if Russia invaded Ukraine. The POTUS said – “If Russia invades, then there will be no longer a Nord Stream 2. We will bring an end to it”.

A reporter then asked – “But how will you do that, exactly, since the project is in Germany’s control?” Biden confidently answered – “I promise you, we will be able to do that.” Interestingly, a day after the sabotage, Germany magazine Der Spiegel has reported that the CIA warned Germany weeks ago of a coming attack on the Nord Stream 1 and 2 natural gas pipelines.

Sure, Russia or even Ukraine has the capability to launch the attack on the pipelines, but it’s hard to see how either of them could benefit greatly from  such a sabotage. On September 16, Vladimir Putin denied Russia caused Europe’s energy crisis and said that if Europe wanted more natural gas it should lift the sanctions in the way of opening Nord Stream 2.

Putin said – “If you have an urge, if it’s so hard for you, just lift the sanctions on Nord Stream 2, which is 55 billion cubic metres of gas per year, just push the button and everything will get going”. Clearly, Russia is still interested to continue to supply Europe with its natural gas. The shutting down of Nord Stream 1 was part of the game of chicken to create an energy crisis to pressure the EU to end the sanctions.

In the same breath, the U.S. saw the energy crisis as a threat to the solidarity of the EU against Russia. The social unrest, street demonstrations, inflation, recession, collapse of governments and whatnot could eventually lead to lifting of sanctions on Russia. Therefore, the only option is to burn the bridge – destroying the Nord Stream pipelines – ending any hope of the EU going back to Russia.