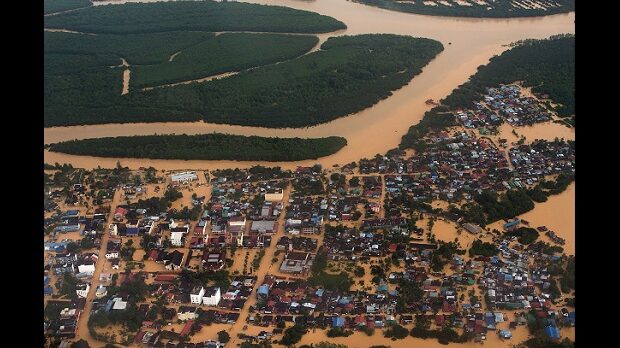 This aerial view shows houses and plantations submerged in floodwaters in Pengkalan Chepa, near Kota Bharu on December 27, 2014. Malaysia's worst flooding in decades forced more than 100,000 people to flee as premier Najib Razak came under fire after photos showed him golfing with US President Barack Obama during the storms. AFP PHOTO / MOHD RASFAN (Photo credit should read MOHD RASFAN/AFP/Getty Images)

PETALING JAYA: Perikatan Nasional’s (PN) public rebuke of Ismail Sabri Yaakob’s Cabinet has prompted a political analyst to predict that the general election is around the corner.

He told FMT that such issues would normally be left on the back burner, unlike the bickering between PN and Barisan Nasional.

He said PN chairman Muhyiddin Yassin, in openly admonishing Ismail, was insinuating that the current administration was incompetent.

“Muhyiddin is trying to attract more voters to his side and push for an early election,” he said. “This means GE15 is very close.”

Azmi also sees Muhyiddin’s outburst as a swipe at Umno since Ismail is a vice-president of the party.

He said Muhyiddin was putting both Ismail and Umno in a tough spot when he claimed that the recommendations of the National Recovery Council, which he chairs, were not followed through.

“It will be hard for Ismail and Umno to defend themselves as the economy is not in good shape,” Azmi said.

Yesterday, Muhyiddin said the council had submitted 95 recommendations to the Cabinet – 69 on socio-economic issues and 26 related to governance.

He said only 16 of the 69 had been fully implemented while 30 were in the pipeline, 14 yet to be implemented, and nine awaiting the Cabinet’s decision.

Muhyiddin’s latest attack on Ismail comes more than a week after he said a general election should be held if the prime minister could not manage the economy and country well.

Ismail shot back, saying Muhyiddin, as his predecessor, was just as responsible for any of the government’s shortcomings.

Another analyst, Oh Ei Sun of the Singapore Institute of International Affairs, said Muhyiddin was being “politically optimistic” in attacking Ismail in the open.

“But there are genuine frustrations among the business community though,” he added. – FMT

PKR deputy president Rafizi Ramli has launched a petition against holding the general election during this year’s monsoon season.

This comes as Umno intensifies its pressure on Prime Minister Ismail Sabri Yaakob to hold the 15th general election (GE15) as soon as possible.

Rafizi said if Parliament is dissolved a month from now, the election would be held during the monsoon season.

“(Holding the) GE15 during floods means more than RM1 billion will be used to manage the election when the people’s funds would be better off being channelled to flood mitigation efforts.

“It also means that hundreds of thousands of civil servants will be on duty to handle the election when they should be volunteering together to help the flood victims.

“Only the people’s voices will be able to send a clear message that the rakyat want the politicians to focus their attention on dealing with the floods, not chasing after political positions through the election.

“I am only one rakyat. With the help of the voices of hundreds of thousands of other rakyat, our voices together will be heard by the politicians,” Rafizi said in a Facebook posting yesterday.

He said all weather forecast reports have predicted that the floods will be even worse this year compared to previous years.

Even before the monsoon season arrived, flash floods have been occurring in places which have not previously suffered from severe flooding.

“Umno president Ahmad Zahid Hamidi boasted that Umno is willing to wade through the floods for an earlier GE15.

“The main issue is that all parties need to mobilise their manpower to deal with the floods and everything that can be postponed or avoided should be postponed first,” Rafizi, the former Pandan MP, added.

Zahid’s remarks on Sept 17 about BN being prepared to campaign for GE15 even if it is held during the monsoon season have been criticised by the opposition.

Politicians from fellow ruling parties have also said it would be unwise to hold the general election during the monsoon season.

However, Zahid claimed that the floods are a “narrative and myth” spun by the opposition to avoid GE15 from being held soon.  MKINI