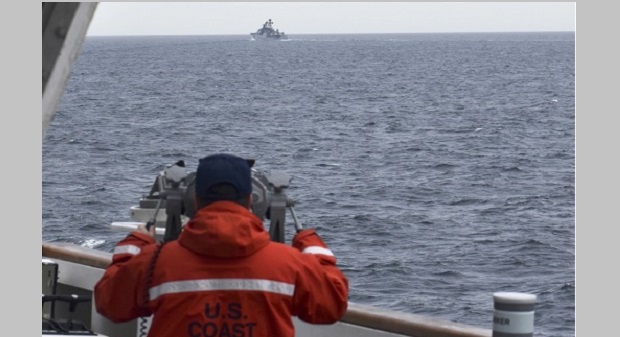 For many years, military superpower the U.S. has been focusing on counter-terrorism. The rise of the dragon, however, has seen the Department of Defence shifted its resources to China. In fact, U.S. President Joe Biden admitted that the “reckless and hasty” withdrawal of U.S. forces in Afghanistan was done to allow Washington to shift its concentration on China.

Even before the Ukraine War began on February 24 this year, there were fears among U.S. policy makers and military generals of a volley of ballistic missiles raining down on Taiwan, naval bases in Okinawa, and facilities in Guam. The retaliation from Beijing after Nancy Pelosi’s recent visit to Taiwan – a deliberate provocation – has convinced Washington that China is determined to invade the island.

It would be naive to think Beijing’s only military options are to either invade Taiwan or to impose a sea blockade on Taiwan. Putin’s threat to unleash tactical nuclear weapons under the pretext to defend Russian territory has not only spooked Biden administration, but is being watched closely by China to see if the U.S. would really enter the world’s first nuclear war just to defend Ukraine. 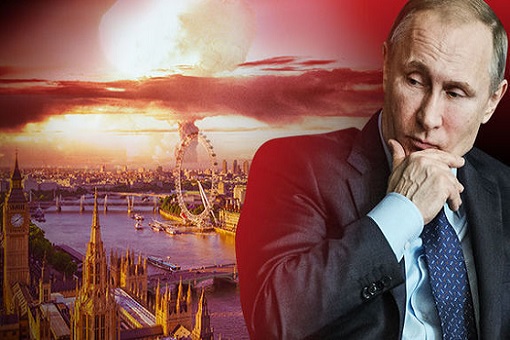 In the game of chicken, Russian President Vladimir Putin could launch nuclear weapons because he was convinced Sleepy Joe will not risk Los Angeles for Ukraine. Even if the senile Commander-in-Chief were to give orders to nuke Moscow, the U.S. generals might be reluctant to follow through with the order for obvious reason. It would be the end of the world.

But what if China plans to, or pretends to, launch a naval assault on Alaska while at the same time preparing to either invade or impose a sea blockade on Taiwan. If Beijing is convinced that Washington will defend Taiwan, it’s hard to see why the Chinese will just encircle Taiwan for weeks, allowing the U.S. and its allies to mobilize their forces to come to the rescue of the Taiwanese.

A deception operation to create the possibility that the Chinese military could attack the U.S. from Alaska while the U.S. forces are focused on Taiwan is well documented in Sun Tzu’s Art of War. However, it could also be a deception operation to draw U.S. forces away from the defense of Taiwan. Are they absolutely sure China will not attack from Alaska if the Chinese knew there could be exchange of nuclear weapons? 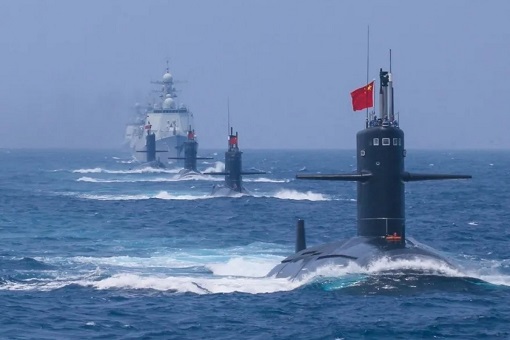 On Monday (Sept 26), a U.S. Coast Guard ship on routine patrol in the Bering Sea reported the presence of Chinese warships in the area. What appeared to be a Chinese guided missile cruiser had turned out to be three Chinese naval ships and four Russian vessels (including a destroyer) in a single formation, sailing about 86 miles (138 kilometers) north of Alaska’s Kiska Island on Sept 19.

The Honolulu-based US Coast Guard Cutter Kimball, a 418-foot (127-meter) vessel, spotted the Renhai CG 101 missile cruiser while on a routine patrol. The best part is, the Chinese and Russian warships were operating in the US Exclusive Economic Zone (EEZ). But there’s nothing the U.S. could do as China could take a page from American playbook and claims it was part of “freedom of navigation”.

Rear Adm. Nathan Moore, 17th Coast Guard District commander said – “While the formation has operated in accordance with international rules and norms, we will meet presence with presence to ensure there are no disruptions to U.S. interests in the maritime environment around Alaska”. Meaning the U.S. can only observe, but cannot condemn or protest the presence of the Chinese and Russian warships.

The Coast Guard said Operation Frontier Sentinel guidelines call for meeting “presence with presence” when strategic competitors operate in and around U.S. waters. That’s a polite way to say that the U.S. is trapped with its long trumpeted “freedom of navigation” mantra whenever they sail through the Taiwan Strait. Now that the Chinese are doing the same in their own backyard, they can’t complain.

But it was the first time Chinese naval ships have sailed near Alaska waters. In Sept 2021, Coast Guard cutters in the Bering Sea and North Pacific Ocean encountered Chinese ships, about 50 miles (80 kilometers) off the Aleutian Islands. The fleet of four ships included a guided-missile cruiser, a guided-missile destroyer, a general intelligence vessel, and an auxiliary vessel.

Type 055 destroyer Nanchang, classified as a “cruiser” by the US Navy and China’s most advanced warship, was part of the fleet that were cruising in the US Exclusive Economic Zone (EEZ) The first recorded encounter was in 2015 when 5 Chinese naval ships – three Chinese combat ships, a supply vessel and an amphibious ship – were spotted in the area.

Interestingly, the latest encounter of the Chinese and Russian formation came a month after NATO Secretary General Jens Stoltenberg warned about Russia’s military buildup in the Arctic and China’s increasing interest in that part of the world. The Western powers were worried because the shortest path to North America for Russian missiles and bombers is over the North Pole.

Russia has already set up a new Arctic Command, not to mention having opened hundreds of new and former Soviet-era Arctic military sites, including airfields and deep-water ports. Stoltenberg said – “We see a significant Russian military build-up with new bases, new weapons systems, and also using the High North as a test bed for their most advanced weapons, including hypersonic missiles,”

Other weapons amassed in the Arctic included “super-weapon” Poseidon 2M39 torpedo – an autonomous, nuclear-powered, and nuclear-armed unmanned underwater stealth torpedo designed to sneak past coastal defenses. The U.S. believes Poseidon (one of the six new Russian strategic weapons announced by Putin in 2018) is designed to “inundate U.S. coastal cities with radioactive tsunamis.” 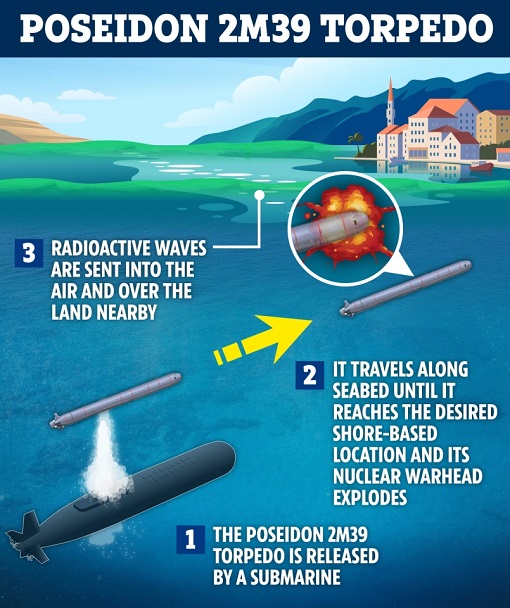 China, meanwhile, has declared itself a “near Arctic” state. The NATO Secretary General said said Beijing plans to build the world’s largest icebreaker and is spending tens of billions of dollars on energy, infrastructure, and research projects in the north. Crucially, Beijing and Moscow have pledged to intensify practical cooperation in the Arctic, potentially challenging the West’s values and interests.

While Russian President Vladimir Putin has estimated the value of Arctic mineral riches at US$30 trillion, China believed the region possesses up to one-fourth of the Earth’s undiscovered oil and gas. While China is not one of eight Arctic sovereign states – Canada, Denmark, Finland, Iceland, Norway, Russia, Sweden, and the U.S. – it wanted a seat at the table.

By leveraging on Russian military bases, the Chinese expanding naval forces could see more warships sent to Arctic to counter the U.S., but under the pretext of protecting its new shipping routes and natural resources. Arctic is China’s insurance to make the U.S. thinks twice that America has something to lose if it starts a war with the Chinese.   FINANCE TWITTER

The Most Powerful Warship In The World – Type 055 Destroyer / Cruiser

Its a Saturday. If you have 15 minutes and dont mind technical military talk then here is a video about China’s Type 055 destroyer – perhaps the most powerful warship in the world today. Todate the Chinese Navy has launched EIGHT of these ships with only-the-Chinese knowing how many more they are going to build and launch.

Why? Because the US Navy’s much smaller Ticonderoga class ships of just under 10,000 tons have been classified as cruisers.

Why? Because if it is classified a cruiser then the American military contractors can charge much more money than say if it was classified a destroyer. The Ticonderogas cost US$1.0 billion each – built in the 1980s and 1990s.

When the Type 055 enters a battle zone it is able to detect any observation satellites (aka spy satellites) that are positioned over that battle zone.  The coordinates of the spy satellites are then relayed to ground based anti-satellite rockets (which maybe too large to be carried on the ship) which can then be fired to take out the satellites.

Spy satellites orbit the earth in Low Earth Orbit (LEO). This is between 84 – 127 miles above the earths surface. LEO allows for clearer imaging and photography.

So the Type 055 cruiser has the capacity to clear spy satellites in the skies over a battle zone.

The other point to note is that the Chinese have most likely already begun work on the next updated super duper version of the Type 055 cruiser. Here is the video: