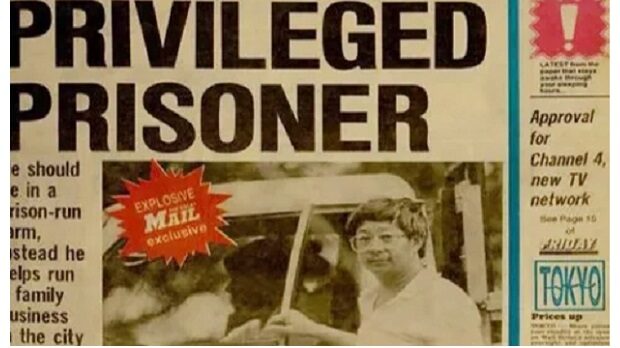 PETALING JAYA: Thirty-three years ago, the nation gasped at the audacity of privileged prisoner Abdullah Ang, who roamed freely outside Kajang prison.

Memories of the Abdullah Ang scandal were revived amid a current controversy over alleged preferential treatment to former prime minister Najib Razak, who is serving time in Kajang Prison for corruption.

Abdullah’s shenanigans, carried out in cahoots with prison staff, were exposed by the Malay Mail newspaper amid pressure from various parties.

Salehuddin Othman, the editor at the time, told FMT that he was offered a bribe of RM100,000 by an anonymous caller not to publish the expose.

Talking about his experiences in the Abdullah Ang affair for the first time, he said the caller told him a senior government leader would be displeased if the story was published.

Before his conviction for criminal breach of trust, Abdullah was the chief executive of the Malaysian Overseas Investment Corporation.

The attempts to get Salehuddin to kill the story included a car driver pointing a pump gun at him while he was driving on the Kuala Lumpur-Seremban highway.

“He was tailing me for a distance and pointed the pump gun in my direction as he overtook me,” said Salehuddin, who suspected the driver to be a trustee of the prisons board.

“Both the incidents were traumatic but we had to publish our findings with the intention to expose wrongdoings in the prison.

“The special privileges given to Abdullah Ang suggested corrupt practices involving prison staff and we couldn’t just walk away from such a scandal,” said Salehuddin.

Salehuddin said he had no regrets taking chances for a story of such importance. “It was worth the agony of dealing with higher-ups.”

He revealed the saga originated from a tip-off by a prisons official “whom we never met”. The source disclosed Abdullah’s arrogance of acting as if he owned Kajang Prison.

The informant detailed how Abdullah, who was serving a four-year jail term, helped run a family business in Kuala Lumpur when he should have been in a prison-run orchid farm in Mantin, Negeri Sembilan.

The information incriminated high-ranking prison officers, guards and the businessman’s associates, all of whom played a part.

Equally shocking was the revelation that the prisoner’s cell was carpeted, and equipped with a refrigerator, video player and waterbed.

It was claimed that Abdullah had also given waterbeds as gifts to certain prison officers.

Upon getting details of Abdullah’s movements from the source, Salehuddin and the assistant editor A Sri K Nayagam set up a team to track the prisoner.

Reporter Badrolhisham Bidin and photographers CH Loh and Goh Seng Chong were told to stake out a garment factory on Jalan Ipoh where Abdullah was supposed to be.

“We had photographs as evidence of him being where he shouldn’t be and that said it all,” said Salehuddin.

On days when Abdullah was at the orchid farm in Mantin, he always had his meals at a nearby stall in the company of his business associates who arrived in expensive cars.

For lunch, Abdullah would ask the stall owner to cook prawns, chicken or anything else that he fancied. He usually ordered food for four people.

The warders looked away despite the fact that prisoners were provided breakfast, lunch and tea at the farm and were subjected to three roll calls a day at 10.30am, 1pm and 3.30pm.

During the months that Abdullah worked at the farm for a daily wage of RM5, he would run up monthly food bills of between RM450 and RM550.

The bills were settled at the end of each month by his business associates who came to see him.

Salehuddin said a special home ministry panel which investigated the Abdullah Ang affair blamed it on weaknesses in the prison system. The investigation came at a time of several prison breakouts which police attributed to staff negligence and poor security.

Then prime minister Dr Mahathir Mohamad ordered a shake-up of the prisons department to bring it along the lines of the national police structure.

The government felt that since the police structure stressed discipline and security, a senior police officer would have a better perspective on the ills that plagued the prison system.

Several other “outsiders” from the diplomatic and administrative service were also seconded to the department as part of the revamp.

Salehuddin said just as the award-winning Abdullah Ang expose wrought the good, the bad and the shamelessly sensationalist, the government should clearly explain to Malaysians why someone with stomach ulcers had to go to a rehabilitation hospital.