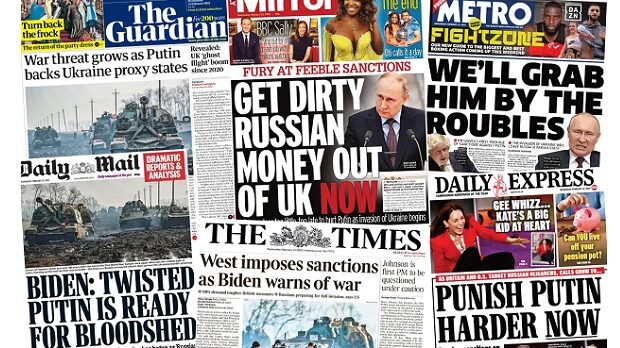 What ? Europeans May Have To Recycle Toilet Paper ??

Just kidding. But among the industries that have thus far shutdown in Europe is a large toilet paper manufacturer (I think in Germany.)

Here is a short YouTube video. European industry is shutting down.

This will certainly affect our economy in Malaysia as well. We still export and import plenty from Europe. A classmate of mine who imports lighting fixtures from Italy says his shipments from Italy have been stuck for some time. Who in our government is keeping an eye on this?  Anyone? What is our Plan B? Or also a Plan C. – http://syedsoutsidethebox.blogspot.com/

Donald Trump: Joe Biden Is ‘Cognitively Impaired,’ May Lead Us to WWIII

Former President Donald Trump said during a Save America rally in North Carolina on Friday that President Joe Biden is “cognitively impaired” and warned that his leadership might lead the United States into World War III.

Trump’s comments on Biden’s mental capacity came during the end of his rally, when he talked about America being a “nation in decline.” Trump also delivered the end of his speech with ominous music playing in the background, as he has done at several of his rallies.

TRUMP: “We have a President who is cognitively impaired and in no condition to lead our country, which may very well end up in World War III.” #TrumpRally

“But now, we are a nation in decline. We are a failing nation. We are a nation that has the highest inflation in 50 years and where the stock market finished the worst first half of the year since 1872,” Trump said.  -https://www.infowars.com/

As US economy sinks, others pay the price

THE US Federal Reserve has only one aim – to continue its jumbo interest hikes to curb inflation in that country even if it means the rest of the world suffers.

In short, we can all drop dead but it’s not their problem.

Bloomberg analyst Marcus Ashworth wrote a report which said the “cure may be worse than the ailment” in describing the interest hikes, the latest of which saw rates raised by another 0.75 percentage points, lifting the target range to 3%-3.25% – the highest level in almost 15 years.

It was aptly headlined “Jerome Powell to the rest of the world: Drop dead.” Powell is the chairman of the Federal Reserve. One thing is certain – the Fed is going to raise interest rates again. The US will do so because it wants Americans to cut spending and save more.

The US central bank is carrying out this action at what has been described as “a pace and magnitude unprecedented for nearly three decades.” The talk is that the rate will be raised further in autumn.

It means it will become costlier for Americans to take out a mortgage for a house, loan for a business or borrow money for a student loan. The hope is that consumers and businesses will borrow less and spend less.

With that, the Fed hopes the US economy will cool down and recover as US inflation hits a 40-year high.

With inflation hitting 9.1% in July and hovering at around 8.5% since, the American economy is in serious trouble.

By increasing interest rates, the Fed hopes for some respite but it also means the rest of the world has to suffer because the US dollar is tied with other currencies.

Malaysia is not spared. Like other economies, it will see more financial misery and more hardship as the cost of living shoots up.

The rate rises in the US will contribute to higher inflation and currency devaluation – in simple terms, a weaker ringgit, for us.

The ringgit has already depreciated by 7.5% against the US dollar since the start of the year. But what many doomsayers are not pointing out is that the Japanese yen has slid by 19.2%, the lowest in 24 years.

According to the International Monetary Fund (IMF), other currencies which have deteriorated include the Chinese yuan, Thai baht, Norwegian krone, Danish krone and New Zealand dollar – all more than 9% YTD (year-to-date) against the dollar.

Those not familiar with the impact of the rates rise have blamed the Malaysian government, implying incompetence.

The critics include politicians who probably understand better and are well-versed with economics. However, the general election is coming up, the silly season is here and guns have been drawn. As the saying goes, all is fair in war and in love.

The nationalistic Chinese media, Global Times, described the US action as “a sharp blade to cut the world” and that the hike in interest rate again as “the beginning of another nightmare.’’

It claimed that ‘’36 currencies around the world have lost at least one-tenth of their value this year” citing the Sri Lankan rupee and Argentine peso, which fell by more than 20% since the US dollar strengthened.

So, with the drop in the value of the ringgit, has Malaysia done that badly? Well, we could do better but we are not really in the dumps.

Malaysia is not in a financial crisis. Our government leaders including Finance Minister Datuk Tengku Zafrul Aziz are saying it but some of us do not want to hear them out.

But according to former Treasury secretary-general Tan Sri Sheriff Kassim, a country is in crisis when the government defaults on its debts or when the banks and money changers don’t have enough foreign currency to meet the demand.

“When businesses can’t get bank loans, when people rush to banks to take all their money out before it’s too late (that’s when a nation is in crisis),’’ he said.

Sheriff, a co-founder of the highly respected Group of 25, which comprises influential Malays, said this has happened in Egypt, Greece, Lebanon and Sri Lanka – leading to the IMF coming in with a rescue package and imposing conditions such as reforms to cut inefficiencies, wastages and leakages in the government’s financial management.

“Malaysia does not need IMF or World Bank money, although we maintain the annual consultation process to benefit from their international experience on development and financial policies,’’ he said.

Without a doubt, Malaysia needs to improve on its revenue and cut down on populist spending. It’s not sustainable.

With the weakening of the ringgit, our imports will become more expensive, especially food. While we can blame the US for our weak ringgit, we cannot just sit still. Bank Negara has to put up a strong strategy to defend our ringgit.

On the plus side, Malaysia’s gross domestic product (GDP) has grown for three consecutive quarters. The GDP grew by 3.6% in the fourth quarter of 2021, 5% in the first quarter of 2022 and 8.9% in the second quarter.

Our inflation rate is around 2.8% which is among the lowest in Asean but that is because many of our essential items are subsidised, with a hefty RM80bil bill.

There are Malaysians who are cynical about the figure, but they should know that we have held on well, especially on fuel.

There is a trust and confidence deficit in Malaysia. Malaysians are the worst critics of our country. Not everything is hunky dory, and we have valid reasons to be angry about the level of corruption and the utter inadequacies of our politicians. But Malaysia hasn’t fared that badly.

The irony is that as the US economy becomes sick, it is the rest of the world that has to swallow the bitter medicine. ANN