Here is some disturbing news. It has been reported in Malaysiakini and Focus Malaysia.

The Malaysiakini news refers a statement by Iskandar Puteri MP Mr Lim Kit Siang raising questions about a message that has gone viral (the “Merpati” message) which claimed that former premier Najib has been accorded certain privileges in his incarceration.

Here is the report in Malaysiakini : https://www.malaysiakini.com/news/636467 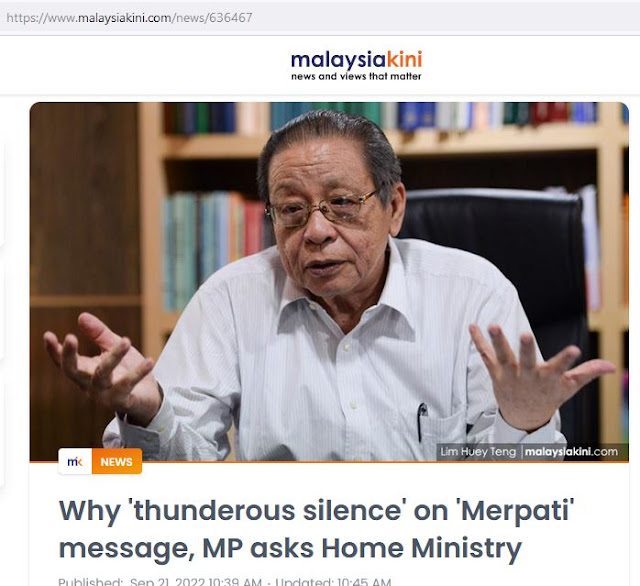 Iskandar Puteri MP Lim Kit Siang has questioned the Home Ministry’s “thunderous silence” on the “Merpati” issue, which claimed that former premier Najib has been accorded certain privileges in his incarceration.

In a statement, the DAP veteran also wondered whether the lack of response from the ministry meant that the allegations made in the anonymous social media message were true.

Then Focus Malaysia has also written in detail on the matter: 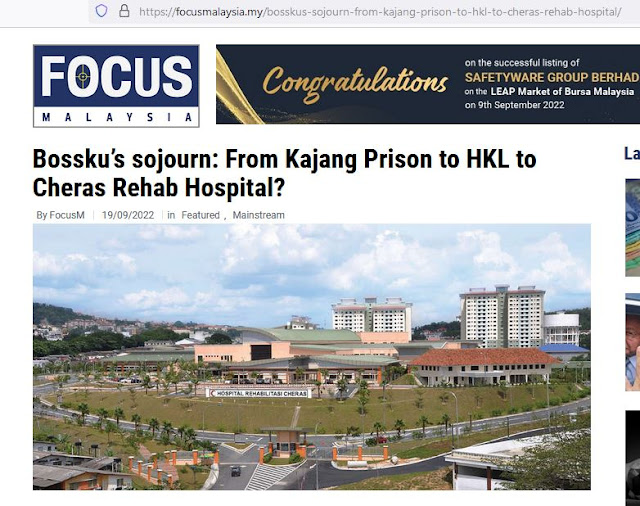 IT is hoped that this piece of information that is now trending on social media is untrue and can be immediately denied by the relevant authorities – that an instruction was issued over the weekend by both the Prime Minister and Health Minister to admit incarcerated ex-premier Najib Razak to the Cheras Rehabilitation Hospital (CRH).

The WhtasApp text in Malay “Merpati (Pigeon)” claimed that the instruction has sparked dismay and furore among civil servants of both the Kuala Lumpur General Hospital where Najib is currently being warded with their counterparts at the CRH.

“The instruction is adamant for admission to Cheras. But the crux of the matter is that there is no strong indication from KLGH for admission to the Cheras Rehab. The (KLGH) physio officer can do outpatient (treatment) 2-3 times weekly. No need for active physio,” read the WhatsApp text.

“And the Chreas Rehab Hospital also insisted that KLGH issued a referral letter for reasons behind admission to Cheras. But KLGH has no (solid) reason except minister’s instruction. Not appropriate to write that down, right?”

The text which listed events since Aug 23 when the Federal Court ordered Najib to commence his 12-year jail sentence at the Kajang Prison added:

“If written as minister’s instruction, the minister has to answer. (But) they are not going to bear responsibility. The issue now is KLGH is not keen to issue a referral letter but received instruction for transfer to the Cheras Rehab Hospital.

“All those who are involved (civil servants) are currently under tremendous pressure. But they dare not come forward.”

To sum up, the WhatsApp text listed down five likely motives/concerns on the proposed transfer of Najib to CRH:

1. Facilitating movement of family members, political secretary, outsiders to visit
2. Easier to meet visitors compared to a restricted prison environment.
3. This could also facilitate political strategising;
4. The Cheras Rehabilitation Hospital provides VVIP facility;
5. Currently, the first class room is being used at KLGHHow will KLGH specialists answer if there is no (proper) reason to transfer “Pigeon” to the Cheras Rehabilitation Hospital?

The onus now lies on the PM’s Dept and the Health Ministry (MOH) to refute claims made by the WhatsApp text which is making its rounds nationwide. – Sept 19, 2022

My Comments :  So the convicted criminal Najib is NOT in Kajang Prison? Can the Ketua Pengarah Penjara issue a statement and clarify?

So this "merpati" story is true.
What rehabilitation does the convicted felon actually need? He was taken in on a BP condition…so what rehab la?

He deserves to be in jail please.
No double standards should be entertained.https://t.co/CG7sXBGMkC

If Najib is in KLGH or at that Cheras Rehabilitation Center, my simple question is for exactly how long will Najib be kept in these medical facilities?  Is it posssible for Najib to be kept under medical care for the entire 12 years of his prison term? Can the Ketua Pengarah Kesihatan issue a statement and clarify?

As I have mentioned previously I recently went for open heart surgery and after the surgery I was kept in hospital for SIX days only. After that I was discharged and went home. That was open heart surgery where they split open your chest and rib cage (sometimes using a bone saw). Najib did not have open heart surgery. And I too take medication for blood pressure.

May I repeat the question : can Najib be kept in the hospitals and the rehab centers for the 12 years of his prison sentence? Or maybe until the General Elections?

The decision of the Federal Court said that Najib will be kept inside jail for 12 years.

The Federal Court did not say that Najib will be kept in the hospitals and rehab centers for 12 years.

Someone has to answer for this.