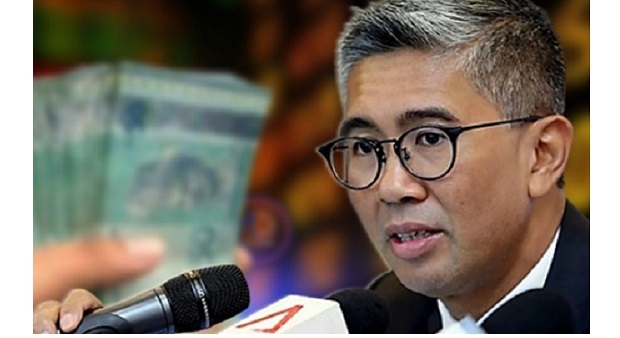 Ringgit In Freefall To RM4.80 – Finance Minister Zafrul Had No Clue That Imports & Debts Suffer With Stronger Dollar

During the 1997-98 Asian Financial Crisis, Ringgit dropped like a rock. In fact, the crisis the swept Southeast Asian countries into currency chaos had forced the Malaysian currency to depreciate by about 80%, from RM2.50 to RM4.50 per US dollar. At its worst level, the currency plunged to a record RM4.885 per dollar in 1998, before it was pegged at 3.80 per dollar.

Besides imposing various restrictions, then-Prime Minister Mahathir Mohamad had also banned offshore trading in the currency. Of course, he also blamed billionaire George Soros and other currency speculators for the crisis, which started after Thai Baht collapsed. The peg was eventually scrapped in 2005, but it had already scared a lot of foreign investors and fund managers.

Today, Ringgit is trading at RM4.534 per US dollar, effectively breaching the psychological level of RM4.50 after testing that level since September 7. And when RM4.50 – the resistance level – is breached, it is now in freefall to RM4.80 (the next resistance level recorded in 1998). Meaning the currency will be trading between RM4.50 and RM4.80. 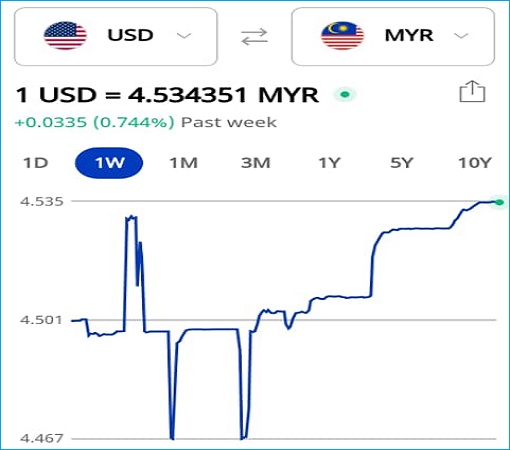 Ringgit could only appreciate to below RM4.50 if the greenback suddenly lost its value. However, based on the U.S. latest August inflation data, chances are the dollar will continue to strengthen as the Federal Reserve is almost guaranteed to raise interest rate by 75 basis points – even 100 basis points – next week. Obviously, the Malaysian central bank is fighting a losing battle as it cannot match the Fed’s rate hike.

Two days ago (Sept 13), clueless Finance Minister Zafrul Abdul Aziz said Malaysia is not experiencing an economic crisis even though its currency is hitting low levels against the US dollar. He argued that while the Ringgit has depreciated by 7.5% against the greenback since the beginning of 2022, many currencies have also fallen against the dollar.

Zafrul said the Japanese yen has plunged to its lowest in 24 years, while the British pound has dropped to its lowest in 37 years, not to mention the Euro has tumbled to its weakest in 20 years. But those countries are not experiencing any economic crisis, argued the arrogant finance minister. He should do his homework before making more investors flee the country in droves.

Contrary to Zafrul’s illusion that Japan appears to be sleeping while its Yen is plunging like a rock, the Bank of Japan actually is preparing for currency intervention. The country is ready to buy up large amounts of its own currency, an intervention that has been very rare. The last time Japan intervened to support its currency was in 1998 when the Asian Financial Crisis triggered a Yen sell-off.

Before that, Japan intervened in 1991-1992 to arrest the falling of the Yen. One of the reasons the Japanese government rarely intervenes is because its economy heavily dependence on exports. Therefore, it could export more when the Yen becomes weak. In fact, it worries more when the Yen appreciates than when the currency falls. Another reason is because currency intervention is costly.

To weaken a strong Yen, the Japanese Ministry of Finance will issue short-term bills to raise Yen, which can be sold in the market. By flooding the market with the currency, it weakens the Yen’s value. On the other hand, to strengthen a weak Yen, the authorities must tap into foreign reserves for dollars to sell in the market in exchange for the Yen. By buying its own currency, it strengthens the Yen’s value.

Clearly, buying Yen is more difficult than selling the currency. And Japan has foreign reserves to the tune of US$1.33 trillion, mind you – the world’s second largest after China’s US$3 trillion. But even with such gigantic piles of foreign reserves, there are limits to how long it can keep intervening. On the contrary, it’s almost limitless how much local bills it can print and issue to raise Yen.

Japan must also inform and seek approval from big brother United States before it can sell its foreign reserves to buy its own Yen. That’s because the U.S. wanted to ensure the dominance of its own currency. When China artificially keeps the Yuan weak in order to make Chinese exports cheaper, the U.S. slapped Beijing as a currency manipulator (even though the U.S. itself can manipulate its own dollar).

However, the strategy is always to play “psychological warfare” first, and never to tell the world when exactly the Bank of Japan will intervene in the currency market. For now, Tokyo is calling traders to interrogate them about the currency market, sending the signal that its gun is “locked and loaded”. This move, called “rate check”, is a warning to currency traders that the big gun is here. 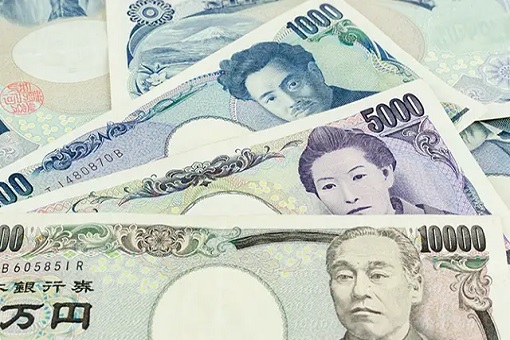 Likewise, the British economy is also crumbling due to the energy crisis as a result of Ukraine war, which led to the plunging pound sterling. The UK wholesale natural gas prices have more than tripled in the last year. The Bank of England is having a headache because the energy crisis is triggering the cost-of-living crisis, where household energy bills could see blackouts this coming winter.

The household incomes in the UK were so seriously affected that protests or strikes have already happened to rail and bus workers, who demanded higher pay rises. British charity National Energy Action (NEA) estimates 8.9 million UK households could be in fuel poverty – a phenomenon whereby people are unable to afford to keep their home adequately heated during winter.

British group – “Don’t Pay UK” – is calling for people to boycott energy bills from October 1. Meanwhile, trade union-backed “Enough is Enough” campaign kicked off a series of rallies and actions in mid-August calling for pay rises, rent caps, cheaper energy and food, and taxes on the rich. The U.K.’s inflation rate skyrocketed to its 40-year-high of 10.1% in July as rising food prices escalated.

In Europe, social unrest has already begun in the Czech Republic, where more than 70,000 protesters took to the street in capital Prague. They demanded the ruling government take a neutral stance on the Ukraine war to ensure energy supplies from Russia are not disrupted ahead of the coming brutal winter. Protesters were outraged with soaring electricity bills and escalating cost of living.

In France, Spain and Belgium, angry workers have already gone out on strike in the public transport, health and aviation sectors – demanding higher wages to help them survive with skyrocketing inflation. The European Union’s inflation rate jumped to 8.9% in July, up from 8.6% in June, 8.1% in May, and 7.4 % in April. The energy crisis is expected to push both U.K. and European Union economies into recession. 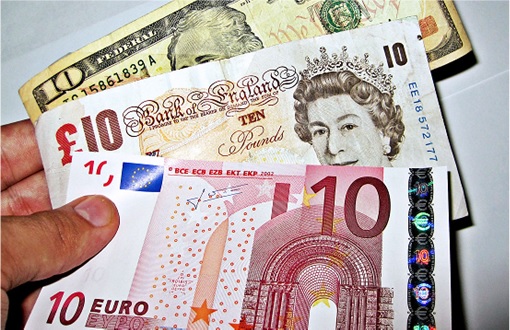 So, which part of economic crisis plaguing Japan, UK and EU that the genius finance minister Zafrul does not understand, or pretending to not understand? If Ringgit trading at RM4.53 – its worst in 25 years – is not an economic crisis, why did Bank Negara Malaysia (central bank) scramble to raise interest rate by 25 basis points for three consecutive times already?

If breaching RM4.50 per US dollar isn’t something to worry, why was Mahathir so panicked in 1998 that the local currency was pegged at RM3.80 to the greenback? Did Mr Zafrul realize that thousands of protesters have rallied in Indonesia over skyrocketing inflation and fuel price hike after President Joko Widodo cut the energy subsidy and let fuel prices rise by 30%?

The only reason Ismail Sabri government dares not cut subsidies now is because of upcoming 15th General Election. Once the corrupt government wins, not only fuel subsidies will be cut, the previous GST (goods and services tax) will definitely return. Zafrul himself admitted that the unpopular tax regime will be improved. If there’s no plan to bring back GST, he does not need to mention “improvement”.

Hilariously, the finance minister also said the tumbling Ringgit is good for the country because it increases export revenue. According to his logic, Japan, UK, 27-bloc EU nations and every single country in the world for that matter should make sure their respective currency drops as much as possible. He has conveniently forgotten about import.

While it’s true that a weak currency means exports will be cheaper hence increases sales, it also means imports become more expensive and often result in inflation. That’s because more Ringgit are needed to purchase goods due to the declining value of the currency. Food imports, for example, cost the country a record RM55.5 billion (compared to RM33.8 billion of exports) in 2020 alone.

Silly Zafrul said Malaysian exporters are very happy with the weak Ringgit. Even if that’s true, exactly how it helps the country’s economy when the same happy exporters are reluctant to convert foreign exchange earnings into Ringgit at a time when the local currency is weak. Yes, when even local exporters have no confidence in the local currency, they prefer to keep their profits in dollar. 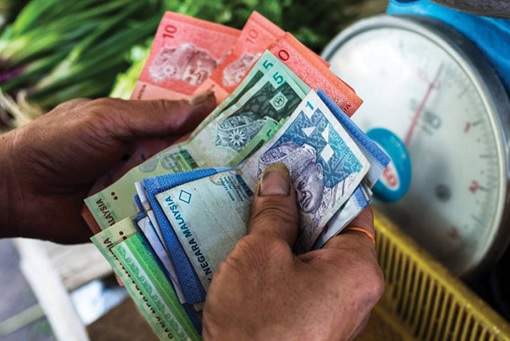 When local exporters refuse to convert US dollar back to Ringgit, it means there is no demand for local currency. This is why Ringgit continues its weakness. Export-import is one of two biggest factors that influence the currency exchange. Another factor is foreign direct investment (FDI) where foreigners pump in huge amounts of foreign currencies to invest in Malaysia.

Again, when foreign investors invest, they need to buy Ringgit because local businesses are conducted in local currency. The demand for Ringgit therefore strengthens the Malaysian currency. That’s what happens to Singapore dollar, where the currency consistently attracts foreign demands due to continuous FDI. It’s not rocket science that the Ringgit is worthless because there is no demand.

The lazy and incompetent finance minister threw some impressive figures to show as if he had done a great job. He said the GDP has grown for 3 consecutive quarters, exports have increased by 38% to RM134.1 billion in July, net foreign investment in the local stock market has amounted to RM8 billion, the unemployment rate has dropped to 3.7% and whatnot.

Despite all the bragging, Zafrul still could not explain why the Ringgit is losing its value at such a staggering rate and is trading at 25-year low. Does he even realize that the country has external debts of RM1.3 trillion? Those US-dollar debt papers mean total interest payments alone would skyrocket due to weaker Ringgit. 1MDB scandal itself is a good example. 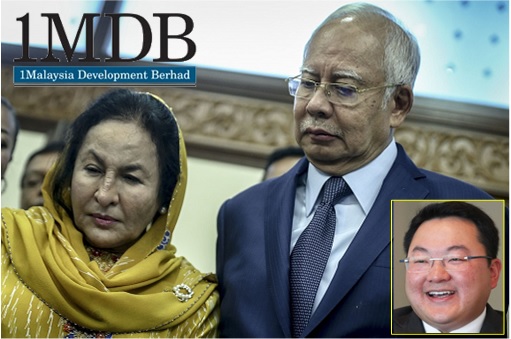 In truth, Finance Minister Zafrul and Prime Minister Sabri knew they do not have the foreign reserves to intervene even if they wanted to prop up the Ringgit. From US$116.9 billion at the beginning of the year, foreign reserves continued to shrink in 2022 – totalled US$109 billion as of June 30, a drop of US$3.6 billion from May 31 – the largest two-week fall since July 2015. It further dropped to US$108.2 billion as of August 30.