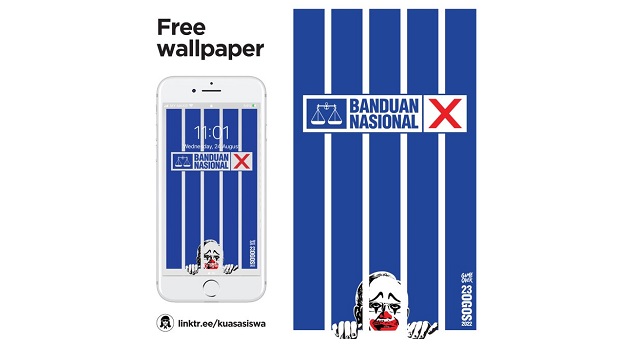 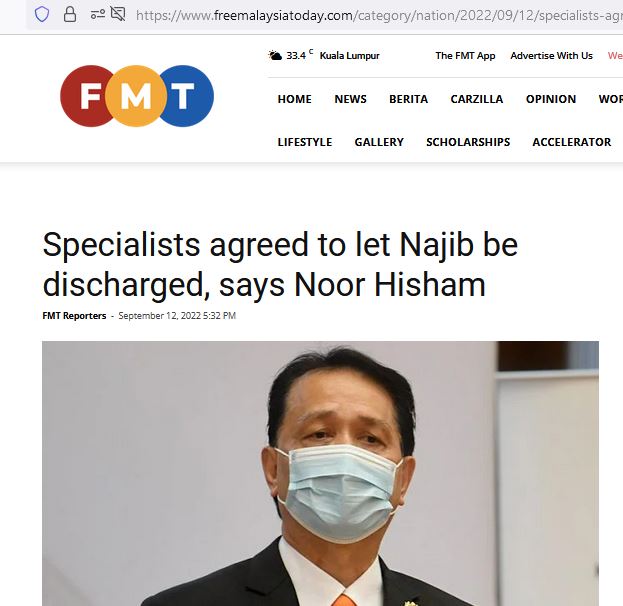 panel of specialists at HKL agreed Najib be discharged
says health DG Dr Noor Hisham Abdullah.
Najib admitted to HKL last Friday over an elective, non-urgent case
(The family) was informed specialists unanimously agreed to discharge he said
“He was declared healthy before discharged from HKL”
According to Noor Hisham, medicine was same he had been taking previouslySo what is this story about Kajang Hospital? 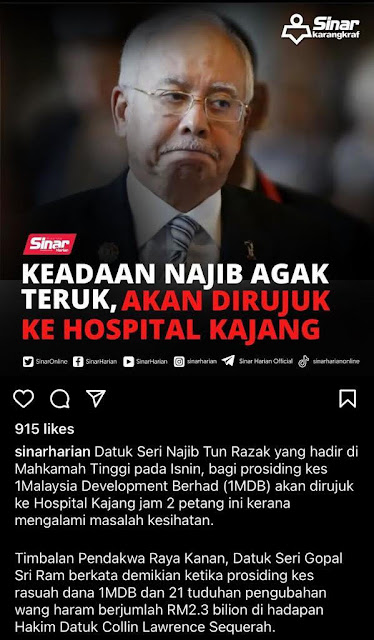 It has only been 20 days since he was sent to jail. There is already all sorts of drama about sakit ini and sakit itu.

There are TWELVE more years to go. Former AG Tommy Thomas has said that Najib will not be eligible to apply for a pardon before serving 1/3 of his sentence. That means he must sit in jail for at least FOUR years.

In FOUR years there will also be a new YDP Agong.

The facts of the other 1MDB cases now going on in Court are equally or more stupid than the SRC case. Chances are slim.

Najib can really save himself a lot of grief by pleading guilty. Just plead guilty. Then strike a deal.

Agree to fully cooperate with the Law.  Return ALL the money that you and your wife stole over 13 years or more. Not just SRC or 1MDB but anything and everything else that you stole. Sc–p-ne, L-S, O-V, solar project, LT-T, F—da, Tab–g H–i or whatever.

Name names and point fingers or point names and name fingers. You choose. Spill all the details – dates, places, how much, who was involved, what, how, where, when etc.

Return all OUR money that you stole. Then after FOUR years you may qualify for a pardon.

Otherwise you will rot in jail. UMNO looks more and more unsteady and unstable as the PRU15 approaches.

Zahid Hamidi is out of the picture. It is a toss up between Ismail Sabri (who surprisingly does not have enemies in UMNO), Mat Hassan who has announced his intentions too soon and your cousin H2O who has now been tarred by the invisible ships fracas.  UMNO is definitely not on a solid footing.

Think about it like this – say all the UMNO fellows are busy saving their own necks then do you think they will have time to come and save your neck? You will be left to rot in jail.

Change your plea over SRC. Its not too late. Plead guilty over 1MDB. Return ALL our money that you stole. Divulge full information and full details. Then work out a deal.

Unless you prefer to rot in jail. – -http://syedsoutsidethebox.blogspot.com/

Najib Abdul Razak was warded at the Kuala Lumpur Hospital (HKL) yesterday due to a blood pressure-related condition.

As a result, the former prime minister’s RM2.28 billion 1MDB corruption trial this morning before the Kuala Lumpur High Court has been vacated.

“Najib has been taken ill. He is warded in HKL.

“I was told at 7.30am and 9.30am, the likelihood of running certain tests would take a few more days.

“But they have not said the number of days,” Shafee said, adding that Najib would be transferred later from HKL to the National Heart Institute (IJN).

Deputy public prosecutor Mohamad Mustaffa P Kunyalam said that the prosecution has no objection against the defence’s application to vacate today’s proceedings.

Sequerah then allowed the trial to be vacated and for the matter to be called up tomorrow afternoon to update the court on the accused’s condition.

Yesterday, the prosecution informed the court that Najib’s health was quite bad and he needed to see a doctor, causing proceedings to end early just after midday.

He said the doctors also performed a biopsy which led to some bleeding and several ulcers had to be clipped to stop the bleeding.

Najib is on trial for four counts of abuse of power and 21 counts of money laundering involving RM2.28 billion from 1MDB.

The Pekan MP was alleged to have committed four counts of corruption at AmIslamic Bank Berhad’s Jalan Raja Chulan branch in Bukit Ceylon, Kuala Lumpur, between Feb 24, 2011, and Dec 19, 2014.

The prosecution contended that the wrongdoing at 1MDB was carried out by fugitive businessperson Low Taek Jho (Jho Low) and several others, with Najib’s blessings.

The accused’s defence team, however, claimed the former premier and finance minister had no knowledge of the crime perpetrated at 1MDB and the embezzlement was solely masterminded by Low and other members of the fund’s management.

Both 1MDB and SRC International are fully owned by the Minister of Finance Incorporated (MOF Inc).

Najib also used to be the chairperson of 1MDB’s board of advisers and served as adviser emeritus to SRC International.

He is serving a 12-year jail sentence, after the Federal Court on Aug 23 dismissed his appeal against the SRC International conviction over seven criminal charges, as well as the custodial term and RM210 million fine in lieu of an additional five years in jail.  MKINI