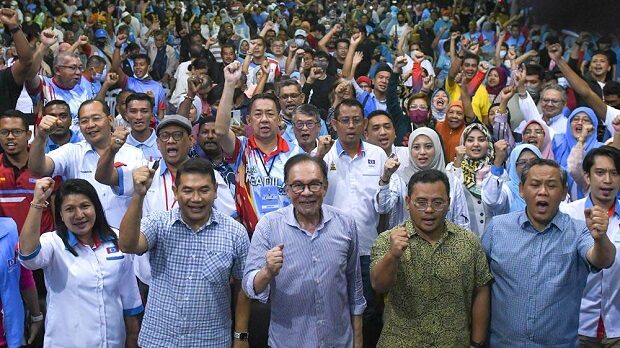 Monsoon season may turn the tide for PKR, Rafizi forecasts

PKR may have a chance at returning to power if the government of the day fails to solve the country’s flooding crisis, said its deputy president Rafizi Ramli.

Speaking to a crowd last night at Taman Melawati in Gombak, Selangor, he warned that the flooding issues may get worse.

“Even now, the flooding is still not over. I would tell (PKR president) Anwar (Ibrahim) – if he was prime minister – this is not the time to play politics.

“This is the time to mobilise our people to be ready to face the worst that we will face,” he said.

Rafizi cited the change of fortunes faced by the Republican Party in the US presidential elections from 2000 to 2008.

While the Republicans under George W Bush had a questionable victory in the 2000 election, the terrorist attacks on Sept 11, 2001, and the subsequent wars in Afghanistan and Iraq led to Bush winning a comfortable victory in 2004.

Rafizi said this led to the Republicans resting on their laurels going into the 2008 US presidential polls.

However, he said they forgot how the country’s south was battered by major floods due to Hurricane Katrina.

Hurricane Katrina hit the US in late August 2005 causing over 1,800 fatalities.

“The Republicans lost in 2008. When (Barack) Obama won, it was because the American people saw that at a time when people were in trouble, their homes destroyed, you (the government), in your power, were too busy with the elections – and then they (the people) were punished.”

“I want to tell the people of Malaysia, to Prime Minister Ismail Sabri (Yaakob), to Umno people: The longer you wait for the election, the closer we are to the monsoon, and the greater the chance for PKR to win the polls,” declared Rafizi.

He cautioned those in power from taking the flood issue lightly.

“If you dare to call an election during the floods, InsyaAllah (God willing), we’ll put everyone in jail after we win… Don’t take flooding lightly,” he added.

The former Pandan MP was speaking at the party’s first “Rapat Mega Keadilan” rally yesterday, which took place from 5pm to midnight, kicking off a series of mega rallies across the country.

Previously, when asked why Gombak was picked as the first spot for the rally, PKR information chief Fahmi Fadzil said they are focusing on the seats of “traitors” but stopped short of mentioning names.

According to the party, 5,000 people were in attendance at yesterday’s rally. Many could be seen donning the party’s colours.

Rafizi, the party’s number two, assured the crowd that PKR will not field candidates similar to Azmin Ali and Zuraida Kamaruddin in the upcoming election.

Azmin, who is a former PKR deputy president and incumbent Gombak MP, defected from the party during the Sheraton Move political coup in 2020.

Ampang MP Zuraida Kamaruddin also left PKR with Azmin for Bersatu but has since moved on again to head Parti Bangsa Malaysia.

“I live in Bukit Antarabangsa and vote in Ampang. If we have a candidate who becomes an elected representative (and is like) Azmin or Zuraida again, I will have to move house.

“So, InsyaAllah, this time, for the people of Taman Melawati, Bukit Antarabangsa, Ampang, we will make sure that our candidate is far better and more sincere than we have had before,” Rafizi said.

In his speech, Rafizi also acknowledged some doubts people have expressed about his party, especially on social media.

He revealed that he has held his tongue when some accused PKR of being a weak party prone to “party hopping”.

“People say that we are the ‘weakest link’ party, what happened from 1998, followed by the party’s revival in 2008, then our win in 2018, it’s as if we were riding on other people’s success.

“People can hit, curse and make fun of us. Our answer is… we show that other people can talk, we will enter the election confidently,” he said.