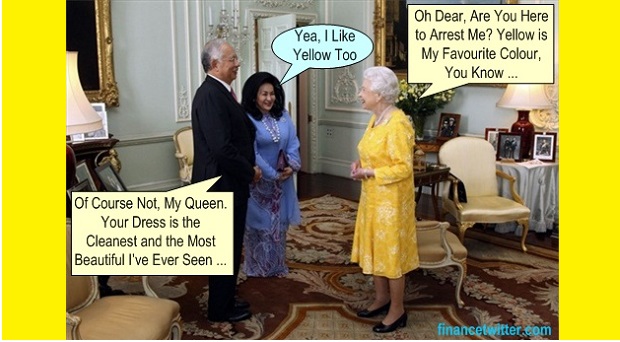 A double rainbow has formed over Buckingham Palace following the announcement of the death of Queen Elizabeth II on Thursday (Sept 8, 2022). Aged 96, the queen died “peacefully” at Balmoral Castle in Scotland. She effectively became the world’s longest-reigning monarch and head of state upon the death of Thailand’s King Bhumibol Adulyadej in October 2016.

Born Elizabeth Alexandra Mary Windsor on April 21, 1926, she was only 27 years old at the time of her coronation on June 2, 1953. She was the first child of the Duke and Duchess of York, who became King George VI and Queen Elizabeth in 1937 following the abdication of Edward VIII. She was the 32nd great-granddaughter of King Alfred the Great, England’s first monarch, who reigned from 871 to 899. 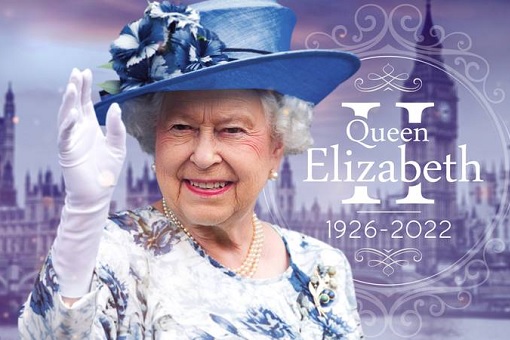 She was called “Lilibet” by her closest family members since childhood, a very personal nickname used when toddler Elizabeth couldn’t pronounce Elizabeth. Both “Lilibet” and her younger sister, Margaret, born in 1930, were educated at home by tutors. At the funeral of her late husband, Prince Philip, in April of 2021, Elizabeth left a handwritten note on the casket signed “from Lilibet”.

Princess Elizabeth met Prince Philip of Greece and Denmark in 1934 at the wedding of his first cousin, Princess Marina, to Prince George, Duke of Kent. However, soon after the coronation of her father, the U.K. was plunged into World War II (1939-1945). It would take two years after the end of World War II that Elizabeth and Philip could get married, some 13 years since they first met.

Elizabeth became queen of the United Kingdom, Canada, Australia and New Zealand upon the death of her father, George VI, on Feb 6, 1952. King George died in his sleep when Elizabeth and Philip made a stop in Kenya during their tour of Australia and New Zealand in 1952. At age 25, Elizabeth ascended to the throne. But her father became the King at an even younger age – 10 years old.

She and Margaret spent much of wartime at Windsor Castle. At 14, she made her first radio broadcast in 1940, addressing children who had been evacuated. After turning 18, she spent 5 months in the Auxiliary Territorial Service, learning basic motor mechanic and driving skills. “I began to understand the esprit de corps that flourishes in the face of adversity,” – she recalled later.

Through the war, she exchanged letters with Philip (her third cousin), who was serving in the Royal Navy, and soon their romance blossomed. On the VE (Victory in Europe) night on May 8, 1945, the future Queen (aged 19) and Margaret (aged 14) sneaked out of Buckingham Palace to join the crowds on the streets of London, celebrating the Allied victory in Europe.

Following her coronation, Elizabeth and Philip had undertaken a seven-month tour – visiting 13 countries and covering more than 40,000 miles. Their first son, Charles, was born in 1948, followed by Princess Anne in 1950, Prince Andrew in 1960, and Prince Edward in 1964. Between them, they gave their parents eight grandchildren and 12 great-grandchildren.

On Nov 20, 2017, Elizabeth and Prince Philip celebrated their 70th wedding anniversary. She would later describe Philip as “my strength and stay” through 74 years of marriage, before his death on April 9, 2021, aged 99. Their 74-year marriage was the longest for the monarchy, surpassing that of King George III and Queen Charlotte’s 57 years (1761-1818).

This year, on Feb 6, 2022, she became the first British monarch to reign 70 years. The last time she was seen in open public was in June 2022, when she made an appearance with her family on the balcony of Buckingham Palace during the first day of the four-day-long Platinum Jubilee, waving to tens of thousands of people. During her reign, her journey was nothing but a spectacular and colourful one.

Her monarch saw the transition from the British Empire to a Commonwealth of 52 independent nations, the end of the Cold War, the country’s entrance and exit from the European Union, as well as the Covid-19 pandemic. Her reign spanned 15 prime ministers beginning with Winston Churchill, born in 1874, and the latest PM Liz Truss, born 101 years later in 1975.

Truss, who was sworn in by the queen only two days before the monarch’s death, was informed of the Queen Elizabeth II’s passing at 4:30 p.m. local time – 2 hours before Buckingham Palace told the world. And the new British Prime Minister was informed of the monarch’s death about 4 hours after the palace issued an extremely rare statement about the queen’s health, saying doctors were “concerned”.

Elizabeth also had met with 13 U.S. Presidents, starting with a visit to Washington to see Harry S. Truman before she became Queen, to Joe Biden, except for Lyndon Johnson. Her first official head-of-state meeting with a US Commander-in-Chief was with Dwight Eisenhower. In addition, the queen also met five popes, from Pius XII (in 1951 before she was queen) to Francis in 2014.

While Queen Elizabeth II leaves behind over US$500 million in personal assets from her 70 years on the throne, which Prince Charles will inherit when he is crowned King, the actual fortune of the royal house is much more complicated. What she owned actually belongs to the so-called Royal Firm – the US$28 billion empire – that members of the British royal family referred to as “the family business.”

The Firm, also known as the Monarchy PLC, is a group of senior members of the House of Windsor, the reigning royal family that the Queen was the head of. Together, they operate a global business empire that pumps hundreds of millions of pounds into the United Kingdom’s economy every year through televised events and tourism, which in turn provide wealth to the Windsors through royal products.

In June, the Crown Estate alone announced a US$312.7 million net revenue profit for the 2021-2022 financial year. The US$500 million in personal assets accumulated by the Queen is largely due to her investments, art collection, jewelry, and real estate holdings. Elizabeth also inherited nearly US$70 million from the Queen Mother after she died in 2002.

The Queen Mother’s fortune included investments in paintings (such as works by Monet, Nash, and Carl Fabergé.), a stamp collection, fine china, jewels, horses, and even a valuable Faberge egg collection. Elizabeth enjoyed a special legal clause that exempts her from paying 40% inheritance tax on the estate left by her mother. As the new King, Charles will enjoy this privilege too.

The monarchy reforms introduced by Queen Elizabeth saw active engagements with the public through walkabouts, royal visits and attendance at public events. She had visited every Commonwealth country at least once. Even though she is just a constitutional monarchy, she was very well updated with global issues, and was extremely influential and remained overwhelmingly popular until her death. 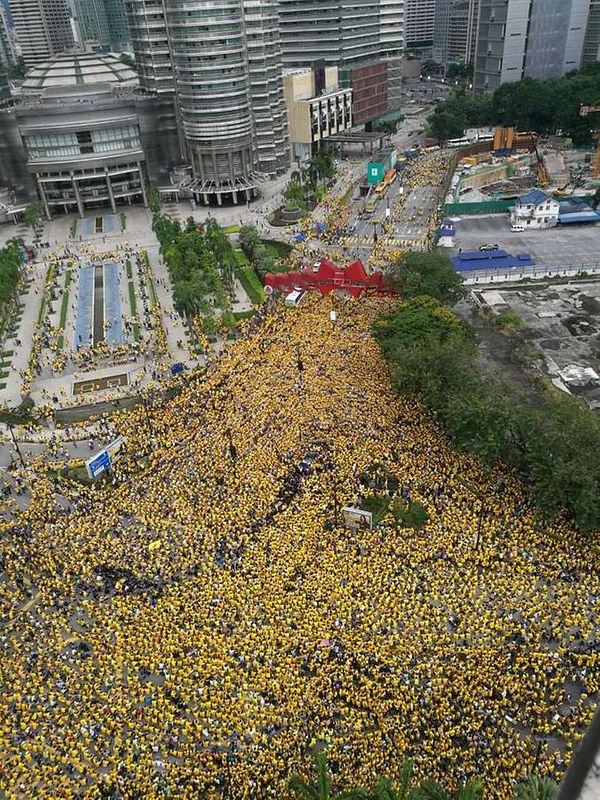 In 2011, for example, Queen Elizabeth deliberately wore a bright yellow dress when she met with Malaysia Prime Minister Najib Razak along with his wife Rosmah Mansor at the Buckingham Palace. It was a “royal slap” in the face of British-educated Najib, who had banned people from wearing yellow, the iconic dress of protesters during the massive Bersih 2.0 rally in Kuala Lumpur.

Demonstrators, wearing yellow to protest and criticize the corrupted Barisan Nasional government led by Najib, were brutally beaten on the streets and thrown into jail without charge under the Emergency Ordinance. Worse, people were not only denied access to lawyers, but were hauled into detention and treated like “enemies of the state” just for wearing yellow while requesting an end to electoral corruption.

The corrupt and arrogant Najib administration had even demanded that the British police ban the “yellow protests” from taking place in Britain, where he met PM David Cameron and the Queen. The police told him that in the U.K., they cannot harass citizens or remove their freedom of expression. Mr Najib is now serving his 12 years’ imprisonment for corruption, 2 weeks before Elizabeth’s passing.

Her journey was no bed of roses though. In 1992, the Queen’s “annus horribilis” (horrible year) saw fire devastated Windsor Castle – a private residence as well as working palace – and three of her children’s marriages broke down. After the death of Princess Diana in a car accident in Paris in 1997, the Queen attracted criticism for appearing reluctant to respond publicly.

The fairytale wedding of Charles to Lady Diana Spencer on July 29, 1981 was witnessed by nearly a billion television viewers around the world. Yet, the marriage collapsed. Diana watched helplessly as her heartless husband continues his extramarital affair, while the monarch looked the other way. The highly popular princess was seen as a victim of the royal house.

Diana and Charles were a mismatch from the beginning. Diana, known for her natural charm and charisma and for using her celebrity status to aid charitable causes, found little in common with her fiancé 12 years her senior. Suspecting that Charles had never actually ended his affair with Camila, the princess succumbed to depression and bulimia. Elizabeth’s mishandling of the death of Diana made it worse.

In the same year (1992) Diana’s tell-all book revealed Charles’ affair with Camilla Parker-Bowles, Prince Andrew divorced Sarah Ferguson, who brought shame to the royal family over her intimate relationship with “financial adviser” John Bryan. It was also the year that saw Princess Anne’s split from her first husband, Captain Mark Phillips – a marriage packed with drama, infidelity, and conflict 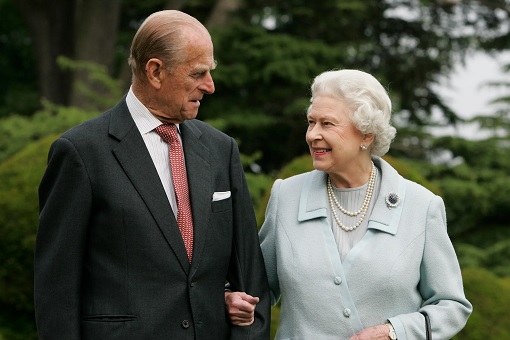 As the most travelled world leader, Elizabeth escaped three assassination attempts in 1970 (Australia) and 1981 (London and New Zealand). In 1979, Anthony Blunt, the royal family’s chief art curator, was exposed as a Soviet spy. At the time, it was quite common for liberal, college-educated youth to be sympathetic to communism. Some believe that Blunt’s homosexuality may have led him to rebel.

In 1986, Sunday Times’ notorious report – headlined “Queen dismayed by ‘uncaring’ Thatcher – sparked publicly the conflict between Queen Elizabeth and former Iron Lady PM Margaret Thatcher. Even though the queen tried to stay out of politics, she apparently disagreed with the British Prime Minister’s refusal to impose sanctions on apartheid South Africa.

Two years ago, the world shut down as the Coronavirus pandemic swept the globe. In April 2020, Queen Elizabeth II made a rare video speech – “While we have faced challenges before, this one is different. This time we join with all nations across the globe in a common endeavor, using the great advances of science and our instinctive compassion to heal.”

She was proclaimed Queen Elizabeth II – “Queen of this Realm and of all Her other Realms and Territories, Head of the Commonwealth, Defender of the Faith.” Having served 70 years as Queen – the longest of any sovereign in the English monarchy’s 1,000-year history – her records and symbol would be impossible to beat.