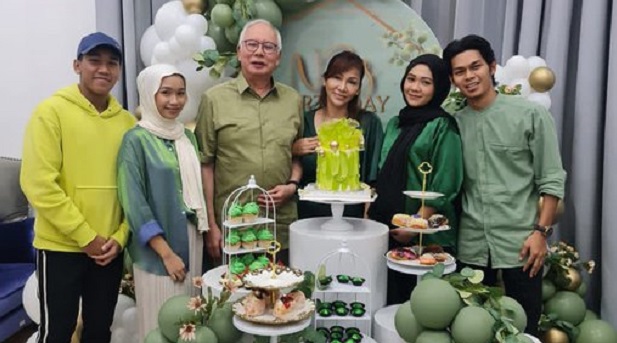 Get a grip, Najib! A cold shower is no hardship

Emotional blackmail always works among some Malaysians. When convicted felon Najib Abdul Razak failed to convince the judges and the general public that he should not be sent to jail, Najib’s propaganda team went into overdrive.

The main weapon in their toolbox was the use of emotional blackmail. It usually works with gullible Umno-Baru Malays.

First, at a rally in Pekan, his son, Mohd Nizar Najib, described him as the Nelson Mandela of Malaysia.

Then they tried to paint the picture that Najib was seriously ill. They denied giving him special privileges and that he was being treated like any other prisoner in Kajang. Was this meant to pull at our heartstrings?

A source told Utusan Malaysia about one of Najib’s health conditions. He said, “He has allergies that can cause him to stop breathing in his sleep, so a machine is needed to help him breathe while sleeping.”

Was this source trying to impress gullible Malaysians that Najib was at death’s door, that he may not survive the night, and that he should be in the comfort of his home or in a special hospital?

What this source probably described is the condition known as sleep apnoea.

When I first spotted the CPAP mask in a relative’s bedroom, draped over the headboard, I thought it was an aid to enhance performance whilst doing horizontal acrobatics.

It was not until the relative explained that her husband’s snores kept the whole house awake at night that I discovered the purpose of the CPAP mask.

One way of reducing sleep apnoea is to lose weight. With prison food and regular exercise, Najib’s obesity should be reduced, but then the source said that in Kajang, five meals a day were given to the inmates.

A friend, who was a former inmate at a prison (not Kajang) during the late eighties, said, “Five meals a day? That’s luxury.”

Four days earlier, Nizar had waxed lyrical about Najib being the Mandela of Malaysia. Instead of attracting support for Najib, he only succeeded in making a fool of himself.

It is extraordinary how ill-informed Nizar is about Mandela. The least he could have done was to brush up on his general knowledge about the world’s most famous political prisoner or employ better speech writers who don’t indulge in fiction.

Najib is no Mandela. The South African freedom fighter who opposed apartheid did hard labour breaking rocks into gravel, and spent 27 years in prison.

Najib supports Ketuanan Melayu (Malay supremacy). You may probably disagree, but we practise a form of apartheid in Malaysia.

It is doubtful that the pampered Najib is as strong mentally and physically as Mandela. Najib could not even last one week before he was whisked to a hospital with “gastrointestinal problems”, a condition that his daughter claims was often exacerbated by stress. More pulling at heartstrings.

Najib’s stress is self-induced. He was unwilling to accept that he did wrong and that he must serve 10 years in jail. He is stressed because of his self-denial and his repeated efforts to be set free. He has not apologised to the rakyat for his many crimes.

Mandela was given a sledgehammer to pound away at rocks. The physical labour took a toll on his health. As for Najib, the most intense physical exertion he has done was to climb into his SUV and be whisked from Kajang to court or to the Kuala Lumpur General Hospital. Or to turn the pages of his books.

In the Utusan Malaysia article, the source said that Najib had to bathe with cold water, and there was only a single fan installed in his cell.

Installing a fan and supplying Najib with the electrical extension for his CPAP mask just prove that Najib is being given special treatment in Kajang.

Have the prison authorities and Najib forgotten the reason why prisons were created? The prison protects us, the rakyat, from the criminal, by stopping him from committing more crimes. It acts as a deterrent by depriving the convict of his freedom and the other liberties which the rest of society enjoys.

Najib has amassed more money than he could ever spend, and although he once said, “cash is king”, all that money could not even buy him respect.