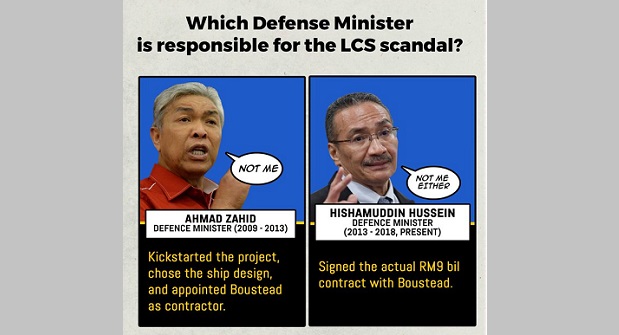 A declassified report of a probe on the littoral combat ship (LCS) project has torn Umno president Ahmad Zahid Hamidi’s denial of involvement in its procurement.

Further, the evidence included in the report by the Special Investigation Committee on Public Governance, Procurement and Finance (JKSTUPKK) is in Zahid’s own handwriting.

The proof comes in the form of a letter sent by Boustead Naval Shipyard (BNS) on July 8, 2010, to Zahid – who was the defence minister – asking for a letter of intent (LOI) on the LCS project.

Then-BNS managing director Ahmad Ramli Mohd Nor – who is also a former navy chief – said in the letter that the company had been planning the LCS project for two years.

However, Ramli said they now needed an LOI to convince original equipment manufacturers (OEM) that the project has the government’s mandate and consent.

In solidarity with Najib, Zahid says there’s ‘your truth, my truth and the truth’

Pursuant to this, the Finance Ministry in a memorandum to Zahid on Aug 2 that year stated that the cost of LCS procurement would be high, and as such, should be weighed against the country’s priorities and resource capacity, and that a project cost needed to be determined before an LOI is issued.

Later on Oct 11, the Economic Planning Unit (EPU) wrote to the Defence Ministry, asking to delay the issuing of the LOI until the ceiling price for projects under the 10th Malaysia Plan was reconfigured.

However, the EPU would later cede to an appeal by the Defence Ministry to issue the LOI to BNS.

On Oct 15, the Defence Ministry issued the LOI to BNS – which remarked that further discussions between the minister and the company needed to be held on several matters, including technical terms and pricing.

Then on Feb 11, 2011, the Defence Ministry requested permission from the Finance Ministry that the procurement is done via direct negotiation with BNS.

According to the report, BNS had actually been trying to get an LOI from the government since 2008 after having discussions with the then defence minister Najib Abdul Razak.

Similar to Zahid, the Defence Ministry under Najib had also requested for the Finance Ministry to issue an LOI to BNS on Jan 15, 2008.

It is unclear why the LOI request was not approved, but the report stated that BNS continued to engage Najib – even when he switched portfolios to the Finance Ministry and then became prime minister – until June 2009.

‘Unfair to blame me’

Last week, Zahid said it was unfair to blame him for the LCS procurement fiasco as the project was awarded after his time as defence minister ended in 2013.

However, the Public Accounts Committee and JKSTUPKK clearly show that Zahid was involved in the early stages of the project.

The letter of award was issued in 2011, although the contract was indeed only signed in 2014.

The JKSTUPKK was set up during the Pakatan Harapan government and was led by former auditor-general Ambrin Buang.

Besides Zahid and the Defence Ministry’s role under him in issuing the LOI, the report also corroborated that Zahid had indeed changed his mind on the design for the LCS.

The navy had wanted to use Sigma-class combat ships for the LCS, which Zahid originally agreed to in May 2011.

However, two months later, Zahid – on BNS’ recommendations – switched to the Gowind patrol ship design instead, without the navy’s blessings.

At the same time, the report also noted that Zahid may have been furnished with incorrect information on the project on one occasion.

On Sept 19, 2011, a memorandum prepared by the Defence Ministry’s secretary-general for Zahid’s approval contained incorrect information regarding the price of a combat management system (CMS).

The procurement division had stated that Setis CMS by France’s Naval group – the same company that makes the Gowind-class patrol ship – was at RM270 million, including the system and cost of integration.

This was supposed to be cheaper than a rival CMS that cost RM349.45 million.

However, the JKSTUPKK found out that the cited price for the Setis CMS did not include the system and integration process as well as currency hedging as reported by the navy in a letter on July 26, 2011.

Instead, the Setis CMS price in the contract was RM479.4 million – RM209.4 million more than what was originally stated to Zahid.

The LCS project was meant to procure six vessels for the navy at the cost of RM9 billion.

The first ship was supposed to be delivered in 2019. However, to date, all vessels are still under construction, even though the government had already paid out RM6 billion.