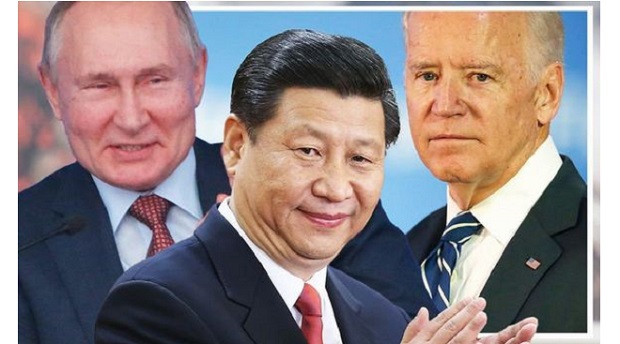 The MSCI all country index was barely firmer, a month-long advance having whittled away the benchmark’s decline for the year to about 13per cent.

Until now, investors have been grappling with how much further central banks in the United States and Europe would hike rates when they meet next month.

Hopes of smaller rate hikes on signs that US inflation may be peaking helped Wall Street clock up its fourth straight week of gains by Friday.

The gains on Wall Street and steady growth figures for Japan helped the Nikkei share average in Tokyo jump to its highest in more than seven months.

“China, I think, is a different situation than the rest of the world. They’ve got a self imposed recession that they’ve created from the zero Covid policy,” said Patrick Armstrong, chief investment officer at investment house Plurimi Group.

“I do think it’s going to be Fed driven if there is another leg down in markets. Quantitative tightening, I think, will begin in earnest in September and that’s going to withdraw liquidity from the market,” Armstrong said.

Markets are still implying around a 50 per cent chance the Fed will hike by 75 basis points in September and that rates will rise to around 3.50-3.75 per cent by the end of the year.

The Fed will publish minutes on Wednesday from its last rate-setting meeting, but investor hopes of them showing the central bank beginning to pivot on rate hikes could be dashed.

US futures ease S&P 500 futures and Nasdaq futures were both down around 0.5per cent after last week’s gains.

Earnings from major retailers, including Walmart and Target, will be scrutinised for signs of flagging consumer demand.

The cut in Chinese interest rates failed to stop Chinese blue chips easing 0.13per cent, while the yuan and bond yields also slipped.

Geopolitical risks remain high with a delegation of US lawmakers in Taiwan for a two-day trip.

The bond market still seems to doubt the Fed can manufacture a soft landing, with the yield curve remaining deeply inverted. Two-year yields at 3.27 per cent are well above those for 10-year notes which were trading at 2.86 per cent.

Those yields have underpinned the US dollar, though it did slip 0.8per cent against a basket of currencies last week as risk sentiment improved.

“Our sense remains that the dollar rally will resume before too long,” argued Jonas Goltermann, a senior economist at Capital Economics.

The head of the world’s top exporter, Saudi Aramco, said it was ready to ramp up output while production at several offshore US Gulf of Mexico platforms is resuming after a brief outage last week.

Several major Wall Street banks have begun offering to facilitate trades in Russian debt in recent days, according to bank documents seen by the Reuters news agency, giving investors another chance to dispose of assets widely seen in the West as toxic.

Most US and European banks had pulled back from the market in June after the Treasury Department banned US investors from buying any Russian security as part of economic sanctions to punish Moscow for invading Ukraine, investors who hold Russian securities and two banking sources told Reuters.

Following subsequent guidelines from the Treasury in July that allowed US holders to wind down their positions, the largest Wall Street firms have cautiously returned to the market for Russian government and corporate bonds, the agency reported, citing emails, client notes and other communications from six banks as well as interviews with the sources. AL JAZEERA

Is the U.S. economy on the cusp of a recession? According to Bank of America’s newest chief economist, the answer is yes.

Michael Gapen, the head of U.S. economics at Bank of America, told FOX Business that he expects the Federal Reserve to inadvertently trigger a downturn this year with its war on inflation.

“This cycle probably ends in a mild downturn,” Gapen said. “How do I come to that? It’s basically just history. It’s really hard to achieve a soft landing.”

Although Fed policymakers are counting on finding that elusive sweet spot – known as a soft landing – as they hike interest rates at the fastest pace in three decades, history shows that the U.S. central bank often struggles to successfully thread the needle between tightening policy and preserving economic growth.

HOW THE FEDERAL RESERVE MISSED THE MARK ON SURGING INFLATION

Recent research from Alan Blinder, a former Federal Reserve board vice chairman and a Princeton economist, identified 11 tightening cycles since 1965, of which eight were followed by recessions. Still, that doesn’t mean a severe recession is guaranteed: There were five very mild recessions in which GDP fell less than 1%, or there was no economic decline at all.

Fed Chairman Jerome Powell had previously identified three examples, in 1965, 1984 and 1994, when the Fed tightened monetary policy, reduced inflation, and saw no decline in growth.

Gapen projected that a recession would likely be mild rather than prolonged.

“Am I saying that the Fed blows it? No,” he said. “They have an interest rate policy and balance sheet tools, and they’re kind of blunt instruments. It’s hard to precisely target things. That’s not the way our economy works, just historically you’re more likely to get something worse than a soft landing.”

There are growing fears on Wall Street that the Fed could inadvertently send the economy into a recession as it takes a more aggressive approach to fighting inflation, which is at a multi-decade high. Policymakers have approved four consecutive rate hikes, including back-to-back 75 basis point increases. They have confirmed that another super-sized increase is on the table in September as they remain “strongly committed to returning inflation to its 2% objective.”

Jerome Powell said during his post-meeting press conference in July that another 75-basis point hike could be appropriate in the future but that it ultimately hinges on upcoming economic data.

Hiking interest rates tends to create higher consumer and business loan rates, which slows the economy by forcing employers to cut back on spending. Mortgage rates have nearly doubled from one year ago, while some credit card issuers have ratcheted up their rates to 20%.

Economic output is already falling in the U.S. Gross domestic product, the broadest measure of goods and services produced across the economy, shrank by 0.9% on an annualized basis in the three-month period from April through June. Growth already tumbled 1.6% in the first three months of the year.

Recessions are technically defined by two consecutive quarters of negative economic growth. They are characterized by high unemployment, low or negative GDP growth, falling income and slowing retail sales, according to the National Bureau of Economic Research (NBER), which tracks downturns.

With back-to-back declines in growth, the economy meets the technical criteria for a recession, which requires a “significant decline in economic activity that is spread across the economy and that lasts more than a few months.” Still, the NBER – the semi-official arbiter – may not confirm it immediately as it typically waits up to a year to call it.

There are conflicting signs about the economy’s health, fueling debate over the state of the economy: The number of Americans filing for unemployment benefits has gradually increased, companies have announced layoffs or hiring freezes, and the housing market is softening. At the same time, unemployment remains near a historic low, and consumers are still spending heavily, despite scorching-hot inflation.

Powell told reporters last month that he does not believe the U.S. economy is in a recession, citing the low unemployment rate and the 2.7 million jobs created in the first half of the year.

“I do not think the U.S. is currently in a recession, and the reason is there are too many areas of the economy that are performing too well,” Powell said. “This is a very strong labor market … It doesn’t make sense that the economy would be in a recession with this kind of thing happening.”