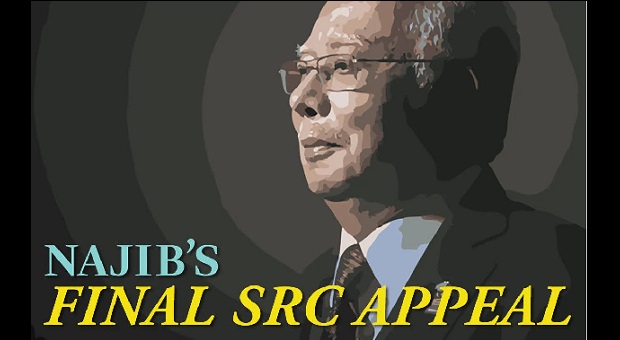 Deputy public prosecutor V Sithambaram submitted that the Federal Court should reject the bid as Najib’s supporting affidavits are all based on hearsay evidence.

Under the law, hearsay is the report of another person’s words by a witness, which a court would usually disallow as evidence during a trial.

Najib’s additional evidence bid is backed by his affidavits over what three MACC officers and two bankers purportedly told the antigraft watchdog during the SRC investigation.

“Those witnesses’ statements are hearsay upon hearsay. They did not tell the appellant,” the prosecutor submitted.

“The application is not a fresh evidence bid but camouflaged (as a fishing expedition into) the alleged conflict of interest on the part of Nazlan,” Sithambaram contended.

The DPP is countering the submissions from defence counsel Hisyam Teh Poh Teik regarding fresh evidence – which was allegedly delivered anonymously in envelopes to Najib between May 9 and July 7.

Hisyam had submitted earlier today that if not for these anonymous envelopes, Najib and the defence team would not have realised the alleged conflict of interest involving trial judge Mohd Nazlan Mohd Ghazali.

Proceedings before the apex court will resume tomorrow morning, with Najib’s lawyers expected to mount a counter-submission against the prosecution’s assertions

Through the fresh evidence bid, which seeks to nullify Najib’s conviction and sentencing in the SRC case, the appellant claimed that Nazlan was potentially biased due to a purported conflict of interest as Nazlan had been a general counsel at Maybank.

The appellant claimed that the commercial bank was then involved in the formation of SRC, a then subsidiary of Malaysian sovereign wealth fund 1MDB.

Despite having officially withdrawn his bribery claims against Nazlan, the former premier stuck to his guns over Nazlan’s purported conflict of interest.

Nazlan has since been elevated to the Court of Appeal.

In the event the apex court dismisses the new evidence bid, it will proceed to hear Najib’s main appeal seeking to quash his conviction for one count of abuse of power, three counts of criminal breach of trust (CBT), and three money laundering counts involving RM42 million of funds from SRC.

Having meted out the sentence, Nazlan allowed the defence a stay of execution pending disposal of the appeal process.

Previously a subsidiary of 1MDB, SRC later became fully owned by the Minister of Finance Inc in 2012.

Najib also used to be SRC’s adviser emeritus and chairperson of 1MDB’s board of advisers. MKINI

“Maybank did some work for SRC and was paid RM800,000 in fees,” Sithambaram said.

“So what if Nazlan had worked for the bank,” he asked.

Sithambaram submitted that Nazlan’s previous employment did not mean there was a conflict of interests that prevented him from presiding over the trial.

The senior lawyer, who is acting for the prosecution on a special licence, said Nazlan’s involvement in Maybank Group was already in the public domain before he was elevated to the bench in 2015.

Sithambaram said it was true the bank provided consultancy services to SRC but not to the extent of Nazlan personally giving advice on the setting up of SRC.

The prosecutor also referred to an earlier affidavit filed by Najib which alleged that Nazlan was involved in bribery, only to withdraw that allegation later.

“This amounts to discrediting Nazlan as a judge,” he added.

Sithambaram also said Nazlan’s alleged conflict could have been raised by the defence during trial when they cross-examined prosecution witnesses.

He argued that it was not reasonable for the defence to challenge Nazlan’s finding that Najib had “overarching” control over SRC merely because of his previous position in the bank.

Sithambaram also told the apex court that the statements by the MACC and bank officers could not be divulged as they were privileged documents.

“It is not subject to disclosure (both) before and after trial,” he added.

In his application, Najib is contending that Nazlan ought to have recused himself from presiding over the trial due to a conflict of interests arising from events which took place when he was general counsel and company secretary of the Maybank group.

The former prime minister is claiming that the judge failed to disclose his involvement in the lead up to SRC’s formation, and the grant of a loan and credit facilities for the benefit of SRC and 1MDB. He says the non-disclosure deprived him the right to challenge the judge’s jurisdiction to hear the case.

The prosecution, however, says that contention cannot be raised now as information regarding the judge’s employment with the bank had been in the public domain since 2018, even before the commencement of the SRC trial in April 2019.

Najib motion, which was filed two months ago and amended with leave of the apex court earlier today, is seeking the introduction of fresh evidence in the form of additional documents which came into his possession on June 16 and July 7 this year, after the trial and appeal to the Court of Appeal had been disposed.

On July 28, 2020, Najib was convicted on seven charges of abuse of power, money laundering and criminal breach of trust over SRC International funds amounting to RM42 million. He was sentenced to 12 years’ imprisonment and fined RM210 million.

On Dec 8 last year, the Court of Appeal upheld both the conviction and sentence. However, Najib was released on bail pending his final appeal before the Federal Court.  FMT