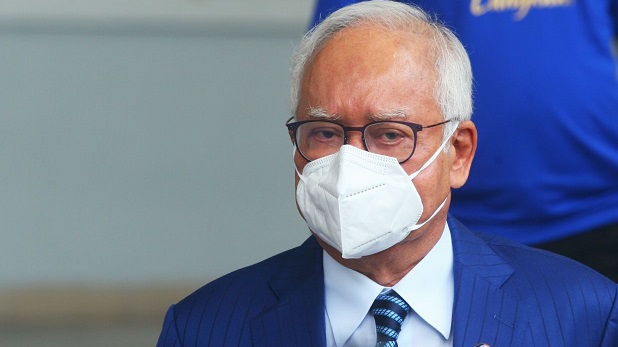 The former prime minister’s lead defence counsel Hisyam Teh Poh Teik submitted that the evidence relating to trial judge Mohd Nazlan Mohd Ghazali’s purported conflict of interest was not made available to them during the criminal trial.

The lawyer pointed out that if not for the anonymous envelopes sent to Najib between May 9 and July 7 – allegedly containing the fresh evidence – then the defence team would not have been aware of its existence.

Hisyam told the Federal Court that the former finance minister was at the time unaware of Nazlan’s alleged knowledge and involvement in the establishment of SRC through his (Nazlan) then position as general counsel of Maybank Investment.

The defence counsel contended that Najib’s situation thus fulfilled the requirement under Section 93 of the Courts of Judicature Act 1964.

Section 93(1) states: “In dealing with any appeal in a criminal case the Federal Court may, if it thinks additional evidence to be necessary, either take such evidence itself or direct it to be taken by the High Court.”

The Federal Court was hearing the application by Najib’s legal team to adduce fresh evidence, as part of a larger bid to nullify his conviction and sentencing in the case.

In the event the apex court dismisses the new evidence bid, it will proceed to hear Najib’s main SRC appeal that seeks to quash his conviction for one count of abuse of power, three counts of criminal breach of trust (CBT), and three money laundering counts involving RM42 million of funds from SRC.

The basis of Najib’s fresh evidence bid was that High Court judge Nazlan was alleged to have a conflict of interest due to his previous tenure as general counsel at Maybank.

The allegation centred on the commercial bank’s purported role in the formation of SRC as well as a loan to sovereign wealth fund 1MDB.

Despite having officially withdrawn his bribery claims against Nazlan, the former premier stuck to his guns over the purported conflict of interest against Nazlan.

Having meted out the sentence, Nazlan however allowed the defence’s bid for a stay of execution pending disposal of the appeal process. Nazlan has since been elevated to the Court of Appeal.

Najib used to be SRC’s adviser emeritus and chairperson of 1MDB’s board of advisers. MKINI

The special aircraft carrying Their Majesties took off from the Bunga Raya Complex, Kuala Lumpur International Airport (KLIA) here, at about 10am.

Before leaving, Their Majesties were given a Royal Salute by the First Battalion of the Royal Malay Regiment, consisting of four officers and 103 members, accompanied by a 21-cannon shot and the national anthem.

Meanwhile, Comptroller of the Royal Household for Istana Negara Datuk Seri Ahmad Fadil Shamsuddin, in a statement today, said the state visit by Their Majesties was at the invitation of President Recep Tayyip Erdogan.

He said the state visit to Turkey was scheduled for last year, but it was postponed due to the Covid-19 epidemic.

Ahmad Fadil said that while in Turkey, Al-Sultan Abdullah is scheduled to meet with Erdogan at the Presidential Palace, Ankara.

Tomorrow, Al-Sultan Abdullah and Tunku Hajah Azizah are scheduled to attend a state banquet hosted by Erdogan at the Presidential Palace, he said.

On Wednesday and Thursday, Their Majesties will have a separate programme in Ankara, before leaving to Istanbul.

However, before leaving Ankara, Their Majesties are scheduled to visit the Diyanet Islamic Library.

He said the state visit symbolised the importance, closeness and strong bilateral relationship between Malaysia and Turkey which was established since 1964. — Bernama