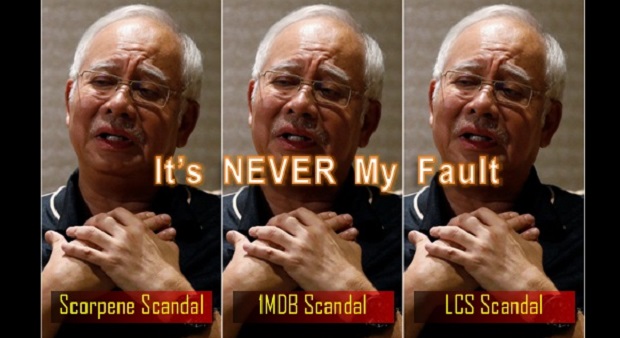 Najib Razak, the disgraced son of Malaysia’s second Prime Minister Abdul Razak, has started to panic over the scandal involving LCS (Littoral Combat Ship). After close to 10 years since the project took off, none of the six warships, worth a staggering RM9 billion, has been delivered. Worse, despite having paid RM6 billion, not a single vessel has been fully built.

The former prime minister is squirming as the explosive scandal comes at a time when his “Judgement Day” is around the corner. His final appeal to stay out of prison will start next Monday (Aug 15) when Chief Justice Tengku Maimun Tuan Mat – the first woman Chief Justice – will lead a panel of five judges to preside over Najib’s appeal in the Federal Court.

Naturally, Mr Najib has gone bonkers and started blaming everyone and everything under the sun, especially the Opposition, for the dubious project. As usual, it’s never his fault, but other people’s fault even though the RM6 billion (which ballooned spectacularly to RM9 billion some 11 months later) project was approved and paid under his administration.

Here are some  top-10 questions for Najib Razal to answer to prove he was not involved in the scandal.

Najib tried to spin the twist the scandal as if it was Opposition’s fault when Pakatan Harapan was in power for 22 months (May 2018 – March 2020). He blames Pakatan, who stunningly defeated him in the May 2018 General Election, for freezing the project. Actually, Najib should explain why he didn’t freeze the project when key contractor Boustead plunged into serious financial problems.

Even when Boustead Holdings’ net profit skyrocketed 574% to RM290.3 million for the first quarter ended March 31, 2022 (which Najib shamelessly took credit for the current un-elected UMNO government), the profit was contributed by a one-off gain from disposal of plantation land of RM364.1 million. Without selling the land, the badly managed company would record losses.

Clearly, despite given the RM9 billion project without any tender in 2011, Boustead’s financial was already in trouble as early as 2017 – before the 2018 General Election. The Pakatan Harapan government was correct to stop the LCS project for 15 months beginning September 2019 for investigation. Not only Boustead was behind schedule, it was in financial trouble.

{ 2 } What Did Najib Do To Solve LCS Project Delays During His Administration?

The procurement of the six combat ships was approved in 2011. The contract, which took effect on Oct 3, 2013, was awarded to Boustead Naval Shipyard Sdn Bhd without any open tender. Construction of the first vessel was supposed to start in 2014 with delivery in 2017 or 2018. However, the first ship was only 44% completed in 2019, and is still unfinished till today, August 2022. 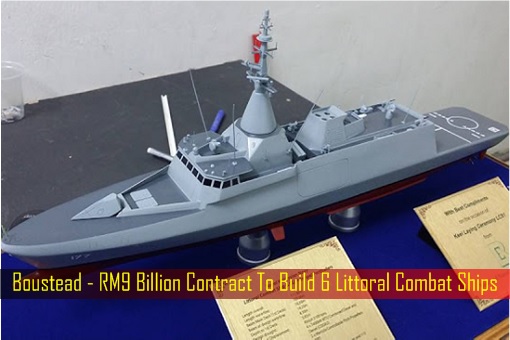 The Pakatan Harapan government ordered Boustead to conduct a forensic audit into the delayed LCS project in July 2018 (two months after it came to power). About 14 months later (Sept 2019), the project was suspended pending negotiations, especially involving design and equipment. Did Najib expect Pakatan to be dumb enough to inject more public money to bail out his corrupt cronies?

Even if Pakatan Harapan hadn’t stopped the project from September 2019 for investigation, would Boustead be able to complete 100% of the first ship in March 2020 (the date Pakatan Harapan was toppled by traitors) when the company had taken 5 years just to complete 44%? The delay did not happen overnight. But Najib did nothing to solve the delays, except blindly paid RM6 billion.

{ 3 } Why Najib Kept Quiet For 8 Years, Knowing Delivery Will Be Missed?

Regardless whether the delivery is in 2017, 2018 or 2019, the fact remains that Boustead cannot deliver even one vessel till today (Aug 2022). In fact, Najib has been keeping quiet for the last 8 years (since construction began in 2014) until the scandal exploded in his face this month. The ex-premier knew the project cannot be delivered from the beginning.

After Pakatan Harapan collapsed in March 2020, Najib’s party – UMNO – became one of the governing partners of backdoor PM Muhyiddin Yassin. Why didn’t Najib make any noise during Muhyiddin’s 17-month government (March 2020 – August 2021) about the progress of LCS? Even after UMNO vice president Ismail Sabri took over as the prime minister, Najib still kept silence.

Najib conveniently blamed Pakatan Harapan for not providing funds or loan guarantees to Boustead to ensure a so-called national strategic project can proceed after registering huge losses in 2018 and 2019. In truth, the government has paid RM6 billion, yet Boustead still fails to deliver a single warship. The company should be sued for breach of contract, not rescued using public funds.

Why is the former premier so protective of Boustead instead of Royal Malaysian Navy? That’s because Lodin Wok Kamaruddin, the chief executive of Lembaga Tabung Angkatan Tentera (LTAT) since 1982 and Group Managing Director of Boustead Holdings since 1991 until the stunning defeat of Najib in the May 2018 General Election, was Najib’s proxy and crony.

Not only Lodin was formerly 1MDB chairman, he was one of the directors of Perimekar Sdn Bhd, a company which was set up only in 2001 (a few months before the Scorpene submarine deal was signed) for the purpose of receiving bribes to the tune of RM500 million. A Najib loyalist, Mr Lodin was also on the boards of Affin Bank Berhad, one of Perimekar’s bankers.

Hanky-panky started when the original SIGMA design was chosen by the Navy and approved by the ministry of defence, only to be changed to GOWIND type on July 11, 2011 at the suggestion of Boustead. Why did the defence ministry listen to a contractor instead of the end user – Royal Malaysian Navy? Navy Commander Abdul Aziz Jaafar has described the entire project as “something is gravely wrong“.

Sigma class is a Dutch-built naval vessels designed by Damen Group. On the other hand, the Gowind 2500 design was developed by France’s Naval Group, formerly known as DCNS. If DCNS sounds familiar, that’s because it was the same French company that paid RM500 million kickbacks to Najib disguised as “consulting work” through his close associate Abdul Razak Baginda in the Scorpene scandal.

While despicable Najib blames Opposition Pakatan Harapan for freezing the project after taking power in 2018, Navy Chief Abdul Aziz has testified that he had written 2 letters to former PM Najib, 5 letters to the defence minister and 10 letters to the ministry’s secretary-general. A letter had also been sent each to the secretary-general of the Treasury and Chief Secretary of the government. 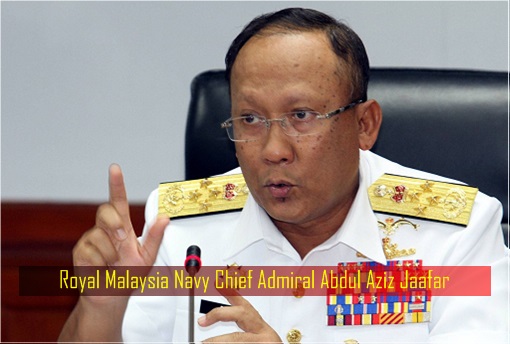 Meaning from 2011 to 2018 under Najib administration, 19 complaint letters by the navy chief had been ignored because DCNS, having worked with Najib in the previous Scorpene submarine project, was pre-selected as  it could facilitate kickbacks for Najib and his deputy Zahid Hamidi, who agreed to change the specification from Dutch Sigma design to French Gowind type.

Najib has not denied the navy chief’s accusation – suggesting that there was interference by his bag carrier, Boustead and LTAT chief Lodin Wok Kamaruddin, to change the military specifications to suit personal interests instead of national interest. If Najib was as innocent as he claims, why did he not bother to entertain complaints by Navy Chief Abdul Aziz.

{ 7 } Why Najib Did Not Investigate Boustead For Breach Of Trust?

The Parliament’s Public Accounts Committee (PAC) discovered that of the RM6 billion paid by the government, Boustead had used RM400 million to repay previous debts incurred under its New Generation Patrol Vessel project. A whopping dubious RM305 million was used for its facility in Cyberjaya, and another RM700 million was a cost overrun for the LCS project.

This means RM1.4 billion meant for LCS has been diverted elsewhere. Interestingly, the New Generation Patrol Vessel project involving the construction of 27 patrol vessels too were awarded to Boustead when Najib served as defence minister. Only 6 out of 27 patrol ships were delivered. The project, signed on Sept 1998 and worth a whopping RM5.35 billion, quickly ballooned to RM6.75 billion.

Not only there was zero justification why defence minister Najib agreed to pay additional RM1.4 billion in 2007 to his close friend Lodin, it screams corruption when the cost of the same patrol ships jumped from RM200 million a pop to more than RM1 billion – 5 times more expensive. The LCS was awarded to help Boustead cover its old debt hole by digging a new debt hole.

{ 8 } Why Najib Allowed New Subcontractors To Inflate Price By 200%?

Leaked information received by opposition PKR deputy president Rafizi Ramli showed that Najib Razak and French naval vessel maker DCNS had already decided on the LCS project even before the defence ministry appointed Boustead as the main contractor. Meaning it was a “done deal” between Najib and DCNS, and Zahid together with Lodin were merely carrying out the order.

The corrupt Najib government awarded two of the project packages worth RM1.185 billion to Contraves, who in turn paid DCNS merely RM397 million – allowing a jaw-dropping 200% commission to be paid. The introduction of more middlemen means the cost would be inflated without tangible benefits. This is how leakages happen in the country.

The hilarious part isn’t just about Najib paying RM6 billion for invisible warships. It is also not just about Boustead’s failure to deliver five LCS ships to the Royal Malaysia Navy (TLDM) by this month (Aug 2022). The best part is “the detailed design has not yet been finalized by the government and Boustead” – even up to today. As (former) finance minister, how could Najib justify such incompetence? 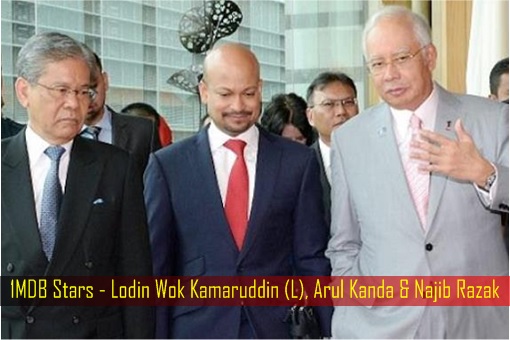 During trials of his pet project – 1MDB scandal – Najib has constantly blamed everyone, including his partner-in-crime Jho Low for scamming him. But in the RM6 billion Littoral Combat Ship scandal, will he accuse Lodin Wok Kamaruddin of scamming him into paying for some vessels which design is still on the drawing board?

{ 10 } Why Not Just Paid DCNS To Build And Deliver The LCS Ships?

To divert attention from his corruption, Najib has asked a brilliant question – which company, if not Boustead, would be able to undertake the LCS project. He argued that the goal was to enable navy ships to be built and maintained by local companies. He asked – “Should Malaysia just be a customer or should we have national capabilities to design, build and maintain ships ourselves?”.

Malaysia did try to build its own car – Proton Saga. But the national car manufacturer could not even fix the “power window” problem for decades. Proton eventually sold to Chinese Geely in 2017. Likewise, has Boustead Naval Shipyard, founded in 1984 (a year before Proton was established in 1985), learned how to build a simple patrol ship after decades in the shipbuilding business?

If Boustead does not have the brain or know-how to design, let alone build a complicated ship like the Littoral Combat Ship, the best option to prevent cost overrun is to pay a foreign company like DCNS to build and deliver. Chest-thumping over national capabilities is a recipe for disaster when Boustead’s track record had already shown its inability to deliver the much simpler 27 patrol vessels.

The successful delivery of all four LMS (Littoral Mission Ship) ships in December 2021 – at a rate of 14 months for a vessel – by China is proof that Pakatan Harapan’s intervention to allow the LMS ships to be built entirely in China was the best strategy. It cost only RM1.05 billion for China to build and deliver 4 LMS ships on schedule, while Najib paid RM6.75 billion to Boustead for delay in delivery of 6 smaller patrol ships and RM6 billion for 6 “invisible” LCS ships.