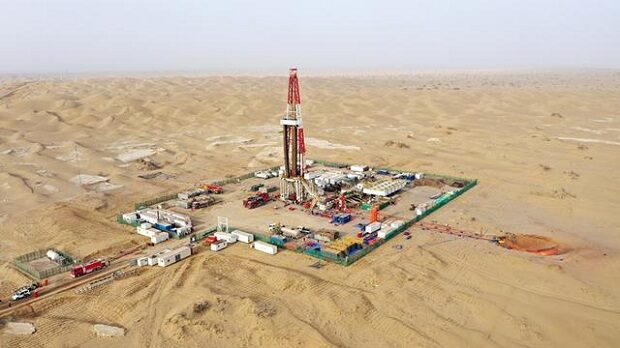 The discovery is the result of exploration in the Shunbei oil and gas field, said to be one of the deepest commercial fields in the world, in the country’s Xinjiang region.

According to the Global Times, Sinopec’s exploration program at Shunbei includes 117 wells, one of which strikes 9,300 meters in depth. Citing the director of China’s Center for Energy Economics Research at Xiamen University, the Global Times said the newest discovery could supply the country’s oil demand for two years.

Shunbei is estimated to have the capacity to produce 244 tonnes of crude oil and 970,000 cubic meters of natural gas per day, according to Sinopec.

The Chinese are targeting the Tarim Basin as having the potential overall to meet domestic oil and gas demand for a decade.

Luo Zuoxian, head of intelligence and research at the Sinopec Economics and Development Research Institute, told the China Daily that while the Tarim Basin is “one of the most difficult to explore due to its harsh ground environment and complicated underground conditions” it has “sufficient energy resources that will guarantee a continuous supply for the country’s future development”. said the discovery will substantially help boost domestic oil and gas output in the country.

The discovery announcement comes on the heels of another major exploration victory for China last month, when state-run oil giant CNOOC made the country’s first-ever offshore shale find in the Beibu Gulf in the South China Sea.

The wildcat well, the first drilled offshore China, is said to be a commercial discovery in a gulf that the Chinese believe holds nearly 9 billion barrels of shale oil in place, though the technological complexity of extraction could pose challenges.  OILPRICE.COM

Located in the central and western regions of the Tarim Basin, the project, also called Shendi-1, has an average reservoir burial depth of more than 7,300 meters and is one of the world’s deepest onshore commercial oil and gas fields, it said.

The discovery is a major milestone in the country’s exploration of deep mineral resources, which will further improve China’s energy supply while guaranteeing national energy security, said the company.

Luo Zuoxian, head of intelligence and research at the Sinopec Economics and Development Research Institute, said the discovery will substantially help boost domestic oil and gas output in the country.

“The Tarim Basin, a major petroliferous basin in China, as well as one of the most difficult to explore due to its harsh ground environment and complicated underground conditions, has sufficient energy resources that will guarantee a continuous supply for the country’s future development,” Luo said. “The discovery has revealed a positive resource prospect in the region.”

In response to the government’s call for increasing domestic oil and gas production, the major national oil companies are committed to China’s Seven-Year Action Plans, which focus on domestic upstream production from 2019 to 2025, said Luo.

Sinopec said its northwest branch that is responsible for the Shunbei oilfield, has ascertained reserves of 1.67 billion metric tons of crude oil and 94.58 billion cubic meters of natural gas so far, with a total output of more than 140 million tons of oil and gas equivalents.

Sinopec President Ma Yongsheng said the company will step up the deep oil and gas exploration in the country in the years to come.

The Tarim Basin, for example, has oil resources buried between 6,000 meters and 10,000 meters that account for 83.2 percent of its total, while the corresponding figure for natural gas is as high as 63.9 percent, it said. – https://www.chinadaily.com.cn/

Russian oil production and exports have been holding resilient in recent months, with much smaller declines than initially expected, the International Energy Agency (IEA) said on Thursday. But the agency’s report warned of a 20% drop in Russia’s production if its oil doesn’t find a home with Asian buyers when the EU embargo takes full effect in February 2023.

In its Oil Market Report published today, the IEA revised its outlook for global oil supply for 2022 upward due to “more limited declines in Russian supply than previously forecast.”

Russian crude and refined product exports to Europe, the U.S., Japan, and South Korea have dropped by nearly 2.2 million barrels per day (bpd) since the start of the war in Ukraine. However, the rerouting of oil flows to India, China, Türkiye, and others, along with seasonally higher Russian domestic demand, has mitigated Russia’s production losses, the international agency said.

By July, Russia’s oil production was only 310,000 bpd below pre-war levels, while total oil exports were down by just 580,000 bpd, the IEA noted today.

A few months ago, the agency expected millions of barrels per day of losses in Russian production and supply to the market.

Still, the EU embargo on Russian crude and product imports from February 2023 is expected to result in further declines in Russian oil production, as some 1 million bpd of products and 1.3 million bpd of crude would have to find new homes, the agency said.

In July specifically, Russian oil exports dropped by 115,000 bpd to 7.4 million bpd, compared to around 8 million bpd at the start of this year, the IEA has estimated.

Crude and oil product flows to the U.S., the UK, EU, Japan, and South Korea have slumped by nearly 2.2 million bpd since the Russian invasion of Ukraine. But two-thirds of those volumes have been rerouted to other markets.

Due to lower export volumes and lower oil prices, Russia’s export revenues declined from $21 billion in June to $19 billion in July, per the IEA’s estimates. – OILPRICE.COM