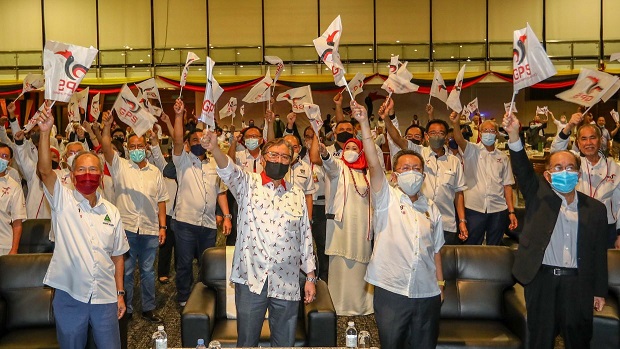 GPS leaders in a jubilant mood after the coalition has officially secured a simple majority to win the Sarawak election. — ZULAZHAR SHEBLEE/The Star

Borneo is stepping onto centrestage

OK, there’s no actual date set for Malaysia’s 15th General Election, but the strong buzz I’m getting from contacts in the corridors of power is that it will happen this year. September or October are the months I hear being discussed.

At the risk of being called a pesky journalist, I habitually repeat questions in different ways to get more elaboration: “But will he really call for an election this year?” I asked ingenuously, referring to Prime Minister Datuk Seri Ismail Sabri Yacoob who is also an Umno vice-president.

In reply, a former adviser to a once very powerful politician rhetorically asked me on Friday, “Who can call for GE15?”

“The big question is, when do you think Ismail Sabri wants to step down as Prime Minister? This year or next year?” he asked.

It is, indeed, the Prime Minister’s prerogative to call for an election, as only he can seek the King’s consent to dissolve Parliament – something people seem to forget, which is why I keep asking the question.

Some of those who are fixated on GE15 being called in a matter of weeks are focused on possible scenarios after the general elections.

The consensus is that Barisan Nasional (comprising Umno, MCA, MIC and Parti Bersatu Rakyat Sabah), which lost in 2018’s historic GE14 to Pakatan Harapan, will win the most out of the 222 Parliamentary seats.

Of those, 165 are in Peninsular Malaysia. Depending on which analysts you speak to, they predict Barisan winning 70, 80, 90 or 100 of these seats.

Just say Barisan wins 80 seats in Peninsular Malaysia. It would need 32 seats from Sarawak, Sabah and the Federal Territory of Labuan to get 112 seats, the simple majority required to form a federal government.

So the kingmaker will come from the Borneo side of Malaysia.

“Barisan will win big in GE15,” a former Opposition assemblyman from Sarawak told a group of us during dinner.

“I disagree,” I said politely, playing devil’s advocate and asking, “Out of the 57 seats from Sarawak, Sabah and Labuan, how many can Barisan win?”

In Sabah, pollsters predict that Barisan can win, at most, four to five of the state’s 25 parliamentary seats. Umno might retain the Labuan seat.

Meaning, out of the 57 seats in Sarawak, Sabah and Labuan, Barisan is only likely to win at the most five to six seats.

Even if Barisan wins, say, 100 seats in Peninsular Malaysia and five in Sabah plus the Labuan seat, it would still need seven more seats to form the government.

The kingmaker will be GPS. It is expected to win 26 to 28 seats in Sarawak. So the most likely coalition government after GE15 will consist of Barisan and GPS.

Political parties from Sabah could also be kingmakers. But the situation in my home state is unlike that in Sarawak where GPS dominates.

If Barisan and GRS can’t agree on an electoral pact, most constituencies will likely see a four-way fight at the minimum: Barisan vs GRS vs Pakatan vs Warisan. GRS is likely to win 10 to 12 seats while Warisan might get four to eight seats.

In which case, would GRS agree to be part of a Barisan/GPS coalition government?

The oddity of GRS is it is led by Sabah Bersatu and that party, along with Sabah Star and SAPP, is part of the Perikatan Nasional coalition, which also comprises PAS and Gerakan.

So which coalition will be GRS – specifically Sabah Bersatu, Sabah Star and SAPP – support? Will it be Barisan or Perikatan?

For Warisan, the matter is clearer: It will support whoever forms the government after GE15. This means that there is a possibility that Warisan will get into bed with Umno.

That is the reason Warisan ditched its GE14 electoral partner, Pakatan, as Warisan wants to win as many seats as possible at the expense of PKR and DAP in Sabah. It is eyeing the Pakatan seats of Tawau, Sandakan, Putatan, Kota Kinabalu, Ranau and Tenom.

DAP leaders have accused Warisan president Datuk Seri Shafie Apdal of working with the enemy, ie Umno. The irony for my Warisan friends is that DAP too is thinking of sleeping with the enemy.

My Warisan friends gleefully sent me a news report published on Monday: “DAP secretary-general Anthony Loke says his party will not rule out a collaboration with Umno. Such matters could happen as anything is possible in politics, he said.”

So, will GE15 be in September or October?

For personal reasons, I hope not. In October, I’m set to go on the Trans Borneo Twilight Trail, a 4WD trip exploring inaccessible parts of Sabah, Sarawak and Kalimantan in Indonesia.

The island of Borneo is taking its place centrestage now, especially with Indonesia set to move its capital to Kalimantan.

Politically, with Barisan, Pakatan and Perikatan all needing the support of GPS to form a federal government, Sarawak is playing a more prominent role in national politics.

Unfortunately, there is no Borneo Bloc – Sabah and Sarawak combined as a political force – as Sabahan politicians are busy fighting among themselves. Everybody wants to be ketua kampung (village chief) in Sabah, lol!