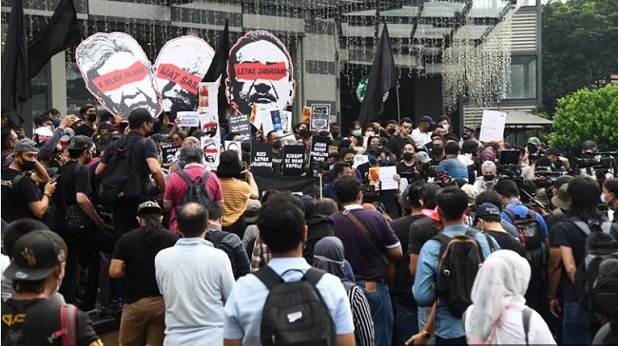 Protesters chanted ‘Hidup Rakyat’ in the rain and demanded that ministers responsible for the debacle be sacked or brought to justice.

KUALA LUMPUR: Members of the public have been urged to not let up on the RM6 billion littoral combat ship (LCS) project and to take to task those responsible for the delay in delivering the frigates.

Muda co-founder Amir Abd Hadi, who led the protest, said it was the public’s right to voice their concerns on the issue.

“They cannot silence us. We will continue to fight for the truth and hold those responsible accountable,” he said.

He advised the public not to fall for the images of an incomplete ship from yesterday’s site visit in Lumut, Perak.

“It’s embarrassing because it looks the same as the one they showed us back in 2017,” he said.

Amir said defence minister Hishammuddin Hussein should resign for failing to take responsibility for the troubled project, which has seen numerous delays over the years. 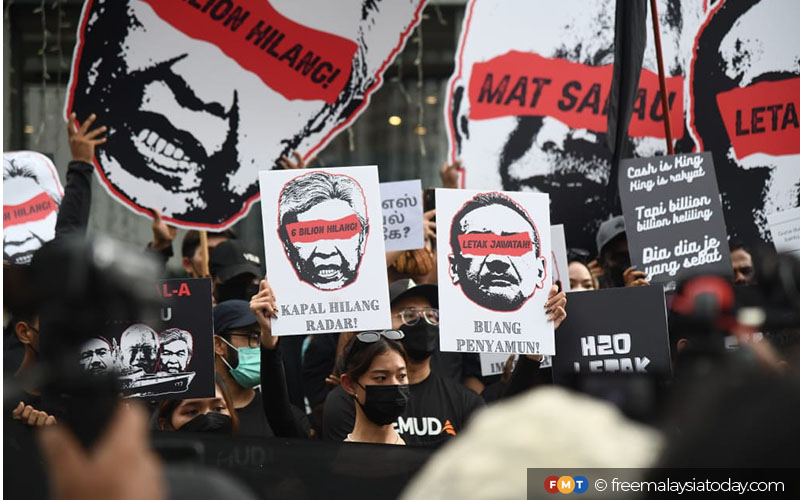 About 200 people had gathered at the Sogo shopping complex from 2pm to protest the failure of the LCS project.

Protesters chanted “Hidup Rakyat” in the rain and demanded that ministers responsible for the debacle be sacked or brought to justice.

Meanwhile, Muda vice-president Shahrizal Denci questioned how Malaysia intended to fend off pirates in our waters without battleships.

“We can’t be expected to fight them off using wooden boats,” he said.

They said “enough is enough” and that the government must take action if there were corrupt practices in the project.

Also present were students and members of various NGOs.

Muda president Syed Saddiq Syed Abdul Rahman told the media he welcomed the declassification of the governance, procurement and finance investigation committee’s report, saying it was a good move.

“However, everything must be out in the open. Do not redact any names in the report,” he said.

On Thursday, the rally’s organisers called on political leaders, NGOs and representatives of civil societies to join in the protest.

The group also called on the government to address the complaints made by then navy chief Abdul Aziz Jaafar on the purchase of the ships.

The LCS project has come under scrutiny after the Public Accounts Committee criticised the delays in the project.

The first ship, launched in 2017, had been due for completion in 2019. However, none of the six ships has been completed or delivered although RM6 billion has been spent on the project.

KUALA LUMPUR: Barisan Nasional (BN) deputy chairman Mohamad Hasan has called on his coalition to defend itself against “slander” hurled by the opposition pertaining to the littoral combat ship (LCS) project.

He said the coalition must counter any allegations levelled against it or any of its component parties by informing the public on the facts of the case.

“We mustn’t allow the opposition to spin the narrative out of control when it has nothing to do with BN or Umno,” he said during a speech at the BN Wanita convention at the World Trade Centre (WTCKL) here.

“This is a coordinated attack against us by the opposition.”

Mohamad, who is popularly known as Tok Mat, then urged the public not to fall for accusations made by the opposition. He said claims made by PKR deputy president Rafizi Ramli were particularly misleading.

“He makes up anything to destroy us but it is our duty to counter his allegations with facts,” he said.

Mohamad, who is also Umno deputy president, added that Prime Minister Ismail Sabri Yaakob had already given an assurance that the authorities would investigate the project and bring those found guilty of any wrongdoing to justice.

“The public should also refrain from speculating about the project as the Malaysian Anti-Corruption Commission (MACC) is still conducting its probe,” he said.

The LCS project has come under scrutiny after the Public Accounts Committee (PAC) criticised the delays in the project.

The first ship, launched in 2017, had been due for completion in 2019 while five more ships were due to be delivered in stages until this month. However, none have been completed or delivered although Putrajaya had already spent RM6 billion on the project.