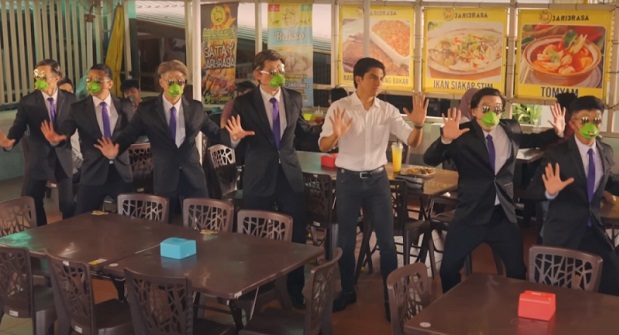 “Frogs in Malaysia will go extinct soon. Let’s lament them through this ‘Katak’ song!” Namewee wrote in a comment on the video.

In Chinese, he wrote longer questioning whether this song “will cause trouble again after its release”.

“Malaysia has been very free of speech in the past two years, hasn’t it?” he asked sarcastically, before wishing “political frogs” the best of luck using a vulgar Malay slang word.

“Let’s do the frog dance together!” he added.

The chorus of the song refers to “political frogs” who like to “jump here and there”, promising riches if one does as they say.

The song by Namewee, or known under his name Wee Meng Chee, also makes references to “frogs at the backdoor” who “suddenly come and go”.

This time, his latest song touches on the Malaysian political scene and sarcastically hits out at politicians who are likened to political frogs causing instability.

In the music video, the controversial 39-year-old artist also attempts to paint a picture of political frogs who alter the political equation and neglect to honour the voting public that gave them the mandate.

Syed Saddiq’s appearance comes at the end of the music video where he is in a restaurant and is later seen dancing with Namewee and seven men in suits.

Towards the end, the Muda president gives a speech in Malay, laced with sarcasm, on frogs being a protected species and as such are Malaysia’s national treasure.

“They have a very high IQ and are very good at jumping with a lot of collagen and most importantly, they are very rich.

“Being under our country for many years, frogs continue to mate non-stop and reproduce in increasing numbers,” he said with shouts of “Hidup katak!” (Malay for “Long live the frogs!”) at the end.

The song’s release came after the constitutional amendment — dubbed the Anti-Party Hopping Bill — aimed at preventing MPs from switching parties that was passed in the Dewan Rakyat at the end of last month.

In February 2020, MPs switching parties and their allegiances became a heated topic, following the Sheraton Move which saw the Pakatan Harapan (PH) government collapse due to the defection of several federal lawmakers.

Following that, several prominent factions within PH joined with leaders of the then Opposition Barisan Nasional (BN) and subsequently led to the formation of a new government under Parti Pribumi Bersatu Malaysia president Tan Sri Muhyiddin Yassin in March.

The move also affected several state governments that saw their state assemblymen defect to seize power under the new administration.