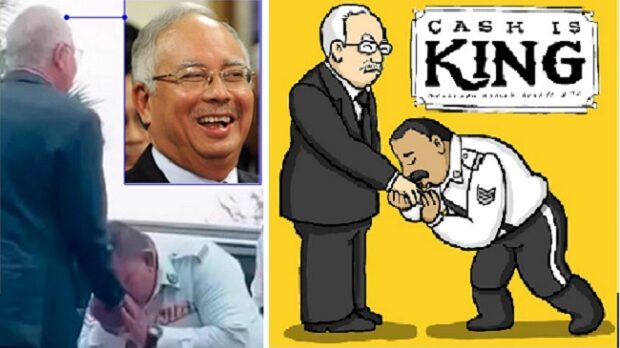 NAJIB Razak today objected to the appointment of two lawyers from Messrs Tommy Thomas to represent the former attorney-general in a RM1.9 million suit filed by the former prime minister.

Lawyer Firoz Hussein Ahmad Jamaluddin, who was representing Najib, submitted that the appointment of Alan Adrian Gomez and Lai Wei Shiung to represent Thomas would make it difficult for them to maintain their professional independence and to act objectively in the suit, which was filed on October 22 last year.

He said Thomas, the first defendant in the suit, was a founder and consultant or partner of the legal firm while his partners also had financial interests in the firm.

“It is not appropriate for lawyers from the same firm to represent Thomas as this action will be viewed as unprofessional,” he said at the hearing of the objection before High Court judge Ahmad Bache.

Alan told the court the objection should be rejected because the plaintiff (Najib) needs to prove it through a supporting affidavit that lawyers representing Thomas have financial interests and have failed to maintain their professionalism in court.

“Thomas is not a partner of Messrs Tommy Thomas; he is only a consultant and does not have financial interests in the legal firm. Thomas left the legal firm after he was appointed attorney-general on June 4, 2018, and he then rejoined the firm as a consultant in September 2020,” he said.

Thomas resigned as attorney-general on February 28, 2020.

After hearing arguments from both sides, judge Ahmad fixed August 19 to deliver his decision on the objection.

In the suit, Najib named Thomas and the government as the first and second defendants.

In the statement of claim, Najib said he had been charged in court in the case of 1Malaysia Development Bhd, International Petroleum Investment Company, abuse of power under the Malaysian Anti-Corruption Commission Act 2009, and money laundering under the Anti-Money Laundering, Anti-Terrorism Financing and Proceeds of Unlawful Activities Act 2001..

The Pekan MP claimed the charges against him were part of a move that had been planned in advance by Thomas, and that the move is in line with the Pakatan Harapan government’s plan at the time.

Najib is asking for a declaration that Thomas had committed misfeasance in public office and is seeking RM1.9 million in damages, including to cover consultation fees for an audit team to review documentation for preparation of facts to address the prosecution against him. – Bernama

Najib, the man with the ‘tainted touch’

Any hostile nation that is keen on invading Malaysia will not bother wasting millions of ringgits raining bombs and artillery on us. They’ll simply breeze in, isolate and surround strategic installations, before forcing our leaders to surrender, because they already know that we are extremely ill-prepared to defend ourselves.

If truth be told, both “Ketuanan Melayu” and the convicted felon, Najib Abdul Razak, are the main causes of the littoral combat ship (LCS) scandal.

It’s because of Ketuanan Melayu that the same senior political characters crop up each time there is a major scandal. Names like Najib, the world’s worst kleptocrat as labelled by the US Department of Justice; Ahmad Zahid Hamidi, who befriends Malay triads like “Tiga Line”; and Hishammuddin Hussein, the kris wielder. They are power hungry, arrogant, and greedy.

These men indulge in a game of musical chairs and take turns to head select ministries, like the Defence Ministry. In this heavyweight ministry, the amount of money made from commissions is eye-watering. Why share it with others who do not form part of the Ketuanan inner circle?

So, are we surprised that the other common element in every fiscal scandal in Malaysia involves Najib, the man with the “tainted touch”?

Jet engines have gone missing from air force bases, only to be discovered for sale in South America.

Auditors have found that out of several fighter jets, only a handful are airworthy. The others have been grounded, allegedly because available spare parts are for different models of combat aircraft.

Our leaders cut deals with their cronies, who are mostly retired armed forces officers turned defence contractors. For the politicians, arms spending is like a Raya shopping spree.

Billions of ringgit of taxpayers’ money pay for military hardware, not because our armed forces need the equipment, but more probably because the items can be easily marked-up and hefty commissions earned.

Our submarines allegedly cannot dive and are just useless bits of floating metal. We may have the most sophisticated radar equipment, but what is the point of having them if the operators doze off, whilst observing the blips on the screen?

Relatives in the army complain of being given goods of inferior quality, and many were forced to buy good boots with their own money. It is also an open secret that contracts for uniforms are reserved for select cronies.

On August 7, Najib made a cheap attempt to deflect the attention of the RM9 billion LCS scandal from himself by blaming the Pakatan Harapan administration of May 2018, having earlier denied his role in the LCS fiasco.

The letter of award from the government to the main contractor, Boustead Naval Shipyard Sdn Bhd (BNS) was issued in December 2011, although the contract was only signed in July 2014.

Zahid endorsed the change from the Sigma design approved by the navy to the Gowind design when BNS suggested the swap.

This is how top tribal leaders act. They do not honour what has been agreed upon. They chop and change according to their whims and fancies. They ignore the people who really matter, which in this particular case, is the navy.

The Gowind design was said to be more of an offshore patrol vessel and not an LCS. With an RM9 billion price tag, there is no way that Zahid could have acted alone and would have consulted Najib, but both men dismissed the concerns of the admiral.

The Sigma system is a Dutch design, whilst Gowind is French. Najib is very familiar with French navy shipbuilders, with whom he cultivated ties via the Scorpene negotiations.

We also know that the Malaysian company that dealt with the Scorpene purchase, Perimekar, earned commissions worth hundreds of millions of ringgits. History appears to be repeating itself with the LSC scandal.

Top leaders in the Ketuanan Melayu tribe earn billions of ringgits stolen from the taxpayer, and it is the profligacy of the tribal leaders with our money (taxpayers’ money) that keeps the followers happy.

The tribal leaders’ solution to their fellow members getting into financial difficulties is to bail them out with taxpayers’ money.  This is what happened to BNS and its subsidiaries.

Moreover, there was no open tender and the weak financial structure and management of BNS meant that the cost of LCS then ballooned. The navy should have acquired 12 ships, but this was reduced to six. In reality, there are no ships.

If the rakyat were to complain, the tribal leaders will cry out that the sub-contractors are all bumiputera-owned companies and if they are not helped, then they will go bankrupt, and the bumiputera and his family will suffer.

There will be no mention of accountability, good work ethics or sound management practices.

This is another fine mess that Najib has got us into. The nation does not need external enemies with Najib around, and for those who think Ketuanan Melayu works, think again. – WRITER – MARIAM MOKHTAR – MKINI